Bleeding Disorders May Cause Heavy Periods

Heavy menstrual bleeding (menorrhagia) is a common problem for women during their reproductive years, affecting between 10% and 20% of the population. In the past, this was often considered normal.

However, research has recently begun to emerge indicating that many women with menorrhagia may have underlying bleeding conditions, such as von Willebrand disease (VWD) or platelet function disorders. Undiagnosed and improperly treated, this can lead to a number of potentially serious problems.

In addition to concerns about anemia from excessive blood loss during menses, an undiagnosed bleeding disorder could lead to major complications during surgery and childbirth, and following some kinds of dental work. According to a 2000 study published in Haemophilia, 7% of women diagnosed with VWD underwent a hysterectomy prior to their diagnosis that did not treat the underlying bleeding disorder. Nearly three times more women with VWD had undergone a hysterectomy than similar women without a bleeding disorder (26% vs. 9%), according to a study published in Haemophilia in 2003. Hysterectomies do not help with either diagnosis or treatment of VWD.

Menorrhagia can also involve quality-of-life issues, such as missing school, social activities or sports or exercise programs because of concern about accidents. Missed work, as well as the costs associated with multiple interventions that might not be indicated if VWD had been correctly identified, add an economic impact.

[Steps for Living: Bleeding Disorders in Women and Family Planning]

There is also a potential problem with the treatment of menstrual cramps in women who have VWD. These patients are often told to avoid nonsteroidal anti-inflammatory­ drugs, such as ibuprofen, which effectively relieve cramps. Without relief, cramps can be debilitating, interfering with work, school and social activities.

“Studies show the average age of women with an underlying bleeding disorder is approximately 35 years at diagnosis,” says Peter A. Kouides, MD, medical and research director at the Mary M. Gooley Hemophilia Center in Rochester, New York. “Earlier identification of women with menorrhagia and an underlying bleeding disorder should be beneficial in allowing for proper management and for prevention of bleeding at times of other challenges, such as surgery or childbirth.”

In a study published in September 2007 in Haemophilia, researchers from the Rochester HTC reviewed the ­records of 61 adolescents between 11 and 19 years old with a history of menorrhagia who were referred to the center. They found that 36% had a deficiency in von Willebrand factor. Another 7% had defects in their platelets, leading to other clotting problems. These results highlight the importance of closely evaluating adolescents with heavy periods for bleeding disorders.

“Of all women with excessive menstrual bleeding, up to 50% will have a bleeding disorder,” says Deborah L. Brown, MD, an associate professor of pediatrics at the University of Texas Health Science Center in Houston. “This is a common problem among women of reproductive age.”

One area of confusion is identifying the difference between heavy menses that are normal and those that are characteristic of a bleeding disorder.

“This is a hard question since most women’s views of what is normal are based on what their mothers or other family members experienced,” says Kouides, one of the authors of the study. “Since many bleeding disorders are inherited, they may not have a good baseline for comparison.”

A wide range of what is considered a normal period further confuses the picture. Some women have light periods and some have heavier ones, with no apparent medical reasons found for the difference. Guidelines from the American ­Academy of Pediatrics and the ­American College of Obstetricians and Gynecologists report that periods lasting longer than seven days are not normal. 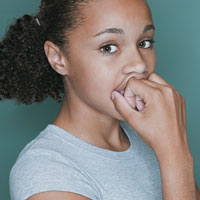 “Yes” answers to the following questions can be indicators of menorrhagia, say Drs. Brown and Kouides:

Proper diagnosis of the cause of menorrhagia is important to the health and well-being of women. From the time a woman starts menstruating until she goes through menopause, these can be lifelong issues with which to contend.