HemAware “Takes 5” with people in the bleeding disorders community and spotlights their efforts with just five questions. Here, we talk with Vaughn Ripley, who has set his sights on competing in the Kona, Hawaii, Ironman triathlon in 2017. Ripley, 44, of Brunswick, Maryland, has mild hemophilia A and HIV. He has also written a book about his life, Survivor: One Man’s Battle With HIV, Hemophilia and Hepatitis C. (The standard drug combination therapy successfully cleared his hepatitis C a few years ago.)

You had some problems in the past with drugs, but now you’re living a clean, fit life. How did that happen?

I grew up a bookworm. I wasn’t drinking or doing drugs. I was raised pretty religiously. At the age of 19, I found I was HIV-positive from contaminated blood products. The doctor at the time told me I had fewer than two years to live. I fell into a dark abyss. It was very easy to hide my fears and frustrations by drinking. And the drinking led to other things. Before I knew it, I was doing all the drugs that were available at the time except for heroin.

Then I realized one day that I didn’t die inside that timeframe the doctor said I had. I started asking myself some pretty important questions, and one of the main ones was, “Is this the way I want to live the remainder of my life?” The obvious answer to that question was no. So I decided it was time to make a change. Once I finally realized I was absolutely not going to do drugs anymore, it was pretty easy for me to quit. I quit overnight. I picked myself up out of that terrible time and made something of myself.

How did you get into fitness and triathlons?

About eight years ago I saw a sign while riding the Metro [the Washington, DC, subway] that said, “Run this marathon in New Orleans for AIDS.” It was very fitting for me because I’m HIV-positive. I’d never done anything near a marathon before—the longest distance I’d ever run was just a couple of miles. I started training that day.

After I completed the marathon, I became a certified personal trainer. That’s when I got into lifting weights. I was also doing a lot of biking and a little bit of running. Last summer, I saw there was going to be a mini-sprint triathlon in my area. I just figured I’d give it a go. It felt like I was suited for the sport. 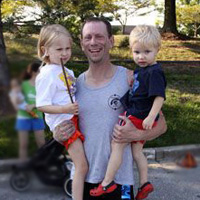 My favorite of the three is biking. For some reason, I can zone out and do a long bike ride without it getting to me. The running seems to be more taxing on me. If I run for an hour or an hour and a half, it gets really old. I like being fit, and I like looking good and looking healthy. Being HIV-positive, people ask me, “How are you feeling?” When I’m superstar fit, I feel a lot better and no one ever asks me, “Are you doing alright?” because they look at me and they automatically know, “Wow, he’s healthier than I am.”

What are your fitness goals?

In my lifetime, I would like to do 100 triathlons. There are different distances. The full triathlon is a 2 1/2-mile swim, a 112-mile bike ride and a marathon at the end, which is 26.2 miles.

Then, there’s a half-distance triathlon and the Olympic distance, which is a 0.93-mile swim, a 25-mile bike race and a 10-kilometer run, which is about 6.2 miles. There are shorter distances for folks just getting into the sport, like the sprint. A sprint is half of an Olympic.

I’ve competed in mini-sprints or super-sprints, which are a quarter of a mile in the swim, about six miles or so on the bike and between a mile and a half and three miles in the run. It’s very overwhelming to look at the distance of a full Ironman and say, ‘This is a triathlon.’ But if you look at a mini-sprint, it’s much easier.

I’m going to mix up the distances. In 2012, I’m going to do my first Olympic distance. I also have another more major goal, which is to complete the Kona Ironman, which is a full Ironman. I’m aiming for 2017 because that’s the year I turn 50. It’s supposed to be one of the toughest in the world. It’s in extreme conditions and pretty hilly in some areas. There are an awful lot of crosswinds and you’ve got 105- to 115-degree temperatures in the lava field run. It’s one of those things where you ask, “What’s the toughest thing I can do in a single day of competitive sport?” That’s what I came up with.

How does such intense exercise affect your hemophilia?

I’ve found in the past when I’m overly stressed, I have more bleeding problems. Staying fit and staying stress-free help a lot. Plus, there’s the mental side—I do things better; I react better. Where I might have stepped off the curb and twisted my ankle before, now that I’m fit and more athletic, I do a better job at managing things like that and don’t have injuries from things like that anymore.