In each issue of HemAware, we “Take 5” with people in the bleeding disorders community and spotlight their efforts with just five questions. Here, we talk to M. Jane Forbes, RN, who, with her husband, Ogden Michael Forbes, EdD, has written a book called Surviving the American Medical System in the 21st Century: Stories of American Citizens with Hemophilia, which chronicles the stories of nearly 400 people who have hemophilia.

What inspired you to write this book?

My first child, a boy, was diagnosed with hemophilia in 1994. I’m a registered nurse, but I knew nothing about hemophilia. Eventually, we had six children—four boys with severe hemophilia, two of them with high titer inhibitors, and one girl who is a carrier and one who isn’t—but we were having incredible insurance issues. No insurance company wanted us. We had an HMO, and we were continually dealing with different ways they tried to kick us off our insurance policy.

In 2001–2002, my husband started a nonprofit. We were given some funding to do research nationwide on families with hemophilia and other high-cost medical conditions and to interview them and see what their journeys were like. The book was published in 2005.

What did you discover about these families?

We compiled interviews of people’s journeys. Some families were having no problems at all, but there were also families with huge costs, and insur-ance carriers won’t carry them. There were families splitting up, families trying to make the poverty level so they would qualify for MediCal or Medicaid.

What is the most important healthcare reform issue for the hemophilia community? 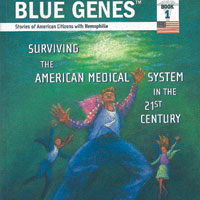 How did you get the chance to meet the president, and what did you discuss with him?

One of my boys qualified for the Make-A-Wish Foundation; his wish was to meet the president. My son, my husband and I gave President Obama a copy of our book and described our situation. He said that that was what the healthcare reform was for, to help people like us. Right now, if you call up one of the big insurance companies and ask for insurance for a person with hemophilia, you will come up with an automatic denial. There has to be another way to deal with this. These insurance companies are not giving a person with hemophilia the same opportunities that everyone else is given regarding healthcare.

What do you hope the president took away from your meeting?

I believe the hemophilia community represents what will happen, if healthcare isn’t reformed, to everybody with other chronic health conditions, such as diabetes. We’re the canaries in the coal mine. Everyone is one diagnosis away from being in this situation.