HemAware “Takes 5” with people in the bleeding disorders community and spotlights their efforts with just five questions. Here, we talk with Alex Dowsett, a professional cyclist with Team Sky in Britain. Dowsett, 22, of Essex, England, has severe hemophilia A. Last season he rode for the American Trek-Livestrong Under-23 team, founded by seven-time Tour de France winner Lance Armstrong. You can follow Alex Dowsett on Twitter.

Cycling as a sport is not followed as much in the US as in other countries. Explain how it is both an individual and a team sport.

It comes down to the element of “slipstreaming,” whereby if one rider sits behind another rider who is breaking the air, that second rider doesn’t have to break that same air. This cuts down on wind resistance, or drag, which will slow you down. Suddenly, if you have a group of team members who all break the air before you, life becomes very easy for you. That’s especially important if you’ve got a race that’s going to come down to a sprint finish. Then, you save your fastest guy and make sure he’s as fresh and has as much energy as possible coming into the final.

You get things called “breakaways,” where a small group of riders will escape from the peloton—the main group of riders. If someone from your team is in the breakaway, the prerogative is on the teams that don’t have riders in the breakaway to pull that breakaway back so those teams stand a chance of winning the race. Lance [Armstrong] used to build his Tour de France team up with riders who would be best suited to getting him into the yellow jersey, the winner’s jersey. They would take him as far up the mountain as they could in their slipstream and then drop him off at the top to finish the job.

It’s my first year on Team Sky. I’m now stepping up into the men’s elite. It’s going to be a big shock to the system for me. I’ll be required to do a lot of the work. As that breakaway goes, if we don’t have a rider in it, then I’ll be one of the ones pulling that breakaway back.

My specialty is the time trial. That’s the individual side of cycling; it’s just you against the clock. I’ll get my own opportunities there to hopefully win some races.

What have been some of your most successful races so far?

Last year I was the Europe Under-23 time trial champion, and I also got a silver medal in the time trial at the Commonwealth Games. In America, I’ve had quite a few podiums—first, second or third place. I got myself into the yellow jersey for a day or so at the Tour of Utah.

How did you get involved in cycling? 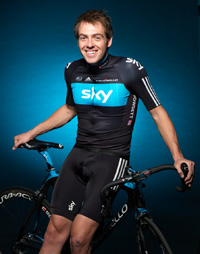 I didn’t partake in rugby like a lot of young boys. I tried to look after myself and avoid contact sports as much as I could. My parents were good in that they introduced me to a lot of low-risk sports. I did sailing. I did a lot of swimming.

My dad did mountain biking with some of his mates. One of his mates did road racing, and I said, “I fancy a go on a road bike.” So, I watched a race and had a go on a road bike when I was 13. I raced a week later, and I was hooked. I realized I was good when I was 14 and I did the Under-17 nationals and finished second against people a lot bigger and stronger than me. That was a big shock.

How does hemophilia affect your cycling?

I haven’t had any problems with it since I was 10. I make sure I keep on top of my prophylaxis. I broke my first bone this year—my shoulder blade—in a crash in Holland. I was back on the road within 10 days. It really showed me that hemophilia won’t hold me back. With my training, I have high-risk or low-risk days, which determines when I do prophylaxis. If I’m not training that day, or I’m only training on the static trainer, then maybe I’ll skip a day. During a race, I make sure my medication is in the following car, but otherwise, I don’t have to do anything different.

In cycling we get tested regularly, and that’s where hemophilia’s good. With something like asthma, you must declare you’re on an inhaler or it’s considered a performance-enhancing substance. Factor VIII doesn’t have any effect on performance whatsoever, so I don’t have to declare it. I do tell my new team each year, especially the people who are our carers. They know to keep my medication cold. And I let my teammates know that I take my medication through an intravenous needle and syringe, so if they walk in on me suddenly, they know what I’m doing.

What cycling goals do you have now, particularly with the 2012 Olympics in London in your home country?

I’m definitely looking to get into the time trial at the Olympics next year. I want to medal. It’s a long shot because I’m still young. In that event it’s generally the older, stronger riders that get the medals. But hopefully the extra motivation of it being on my home turf will drive me on.

This year, I just want to settle in with the team and make as few mistakes as I can—and hopefully get a win or two under my belt. At the end of the year, there’s the World Championships. Now that I’m not in the under-23 category anymore, I’d love to be selected for the men’s event and see what I can do.

What did you think of Alex's story? Please leave your comments below.

See Cycling News video of Dowsett talking about his hemophilia.

Do you know an interesting individual we should profile in a future issue of HemAware? E-mail Managing Editor Melanie Padgett Powers.
Comments