Perseus Patel is an 18-year-old pre-med student at UCLA. He has hemophilia A and lives in Hercules, California.

Talk about the camp you started in India.

Last year was the first year, so it was small, with about 20 kids. It was four days long, and we went swimming, took a field trip and did some hiking. We did a lot of physical therapy and self-infusion sessions. We also spent time talking about what it is like to have a bleeding disorder and tried to help the campers positively internalize their bleeding disorder.

Last year it was open to just boys because we had three male adult staffers, including myself. It would have been difficult to have girls at the camp. We are looking to expand and recruit female staff so we can have a girls’ section as well.

Why do a camp in India?

I was born and lived in India for 10 years. I know what those kids go through and what their lives are like. I wanted them to have the camp experience I had here. ­Children with hemophilia everywhere need to know how to self-infuse. It saves time, helps decrease joint ­damage and can prevent emergency situations.

Most kids in India don’t have their own factor, so I got factor donated to the camp. Over there, you don’t treat all your bleeds, and you definitely don’t do prophylaxis. You only treat the bleeds that are out-of-control painful, so most of the time you’re just supposed to ice and elevate it. Those kids definitely live a really rough life.

Who goes to the camp? 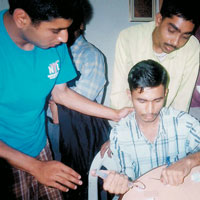 I worked with the Hemophilia Federation of India to promote the camp and identify the kids who were the worst off and had the greatest need. The average age was around 14. Some of the kids will be returning this year. I’d like to start developing some leadership skills among them. If I can teach 14- to 17-year-olds how to self-infuse, they can turn around and teach a 12- or a 13-year-old. So I hope that we’ll have a wider age group as we grow.

How is your camp different from the camps you’ve attended in the US?

There’s not much similarity in what we do and how much we push the kids. These kids aren’t getting factor year-round; we can’t push them the way we push our kids here. There aren’t the facilities. But I tried to mimic the camp atmosphere, and concentrate on the core feeling and the friendships that develop at camp.

What do you get out of running the camp?

I’m inspired by the guys I met over there. One of the campers, probably around age 20, would come to camp and spend the day with us. He would then hop on his motorcycle and go to work the night shift at a restaurant so that he could support his family. Sometimes I would hear him come back really early in the morning and go to bed for a few hours. He usually worked during the day, but he really wanted to come to camp, so he told his boss that he would work the late shift. With all the adversity these guys face daily, they just try to live their lives to the max.