Susan Scroggins didn’t know which was worse: that both her children had been diagnosed with type 1 von Willebrand disease (VWD), or the dearth of support and information for families living with VWD in her area. It was December 2010, and she had just spent the past several weeks watching her 12-year-old son and 13-year-old daughter bleed uncontrollably after having their tonsils removed. When Scroggins was not at work or caring for them, she fretfully combed the Internet for any nugget of information that could soothe her anxieties. She wondered if her son could still play sports and whether her daughter could still attend church camp. Overall, she wondered if her children could lead normal lives.

“I was looking for anything that would say, ‘This is the best physician to treat the disease, this is who you can call with a question or if you just need a shoulder to lean on, and here are some other people dealing with the same thing nearby,’” says Scroggins, 40, of Center Ridge, Arkansas. On New Year’s Eve 2010, she typed this first entry in her new blog, vWD in Arkansas:

Not much time, but wanted to feel like I was making some sort of progress in my attempt to make sense of this craziness I call life right now. The gist of it is that we’re a simple country family living a complex life right now. The recent diagnosis of von Willebrand Disease in R and D make things even more complicated.

The blog was intended to be Scroggins’ personal therapy and a way to share information she came across. She opened a Twitter account on New Year’s Day and posted her first entry. Two hours later, a young woman from Maryland who had VWD requested to follow her on Twitter. Scroggins was amazed at the quick response. Through their conversations, the woman gave Scroggins a host of information about support programs and treatment options to ask her hemophilia treatment center (HTC) about. 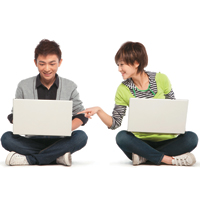 Individual blogs, discussion forums, Twitter, Facebook and YouTube are increasingly becoming the primary link connecting members of the bleeding disorders community. The upward trend in social media usage reflects what’s going on in the general population. A survey of more than 5,000 Americans found that nearly one-fourth are active on a social networking site and 7% are blogging, according to a November 2009 study in the Journal of Medical Internet Research. These online resources function like a virtual support group for people with bleeding disorders—only better. When Scroggins has a question, even if it’s in the middle of the night, all she has to do is log on.

A YouTube search on “hemophilia” pulls up nearly 1,200 videos, uploaded over the past four years. Most of them are personal stories; others are educational videos or homemade public service announcements soliciting political and financial support. The most-viewed videos have been played more than 100,000 times.

Discussion forums are generally hosted by a particular organization. Inhibitorsupport.org, hosted by the Haemophilia Society of the United Kingdom, is for people with hemophilia and inhibitors. Los-bleedos.net, hosted by the Danish Haemophilia Society, is for young people with bleeding disorders worldwide. Topics address the effect of bleeding disorders on anything from scuba diving to intimate relationships. Members can remain anonymous or, as with social networking sites, create profiles.

National Hemophilia Foundation (NHF) chapters are boosting their social media presence to educate and keep funders engaged. This year the Colorado Chapter launched a weekly blog, a Facebook cause page, and Twitter and YouTube accounts. “This will never replace one-on-one interaction, but it’s an entry point,” explains the chapter’s executive director, Emily Davis, MNM. “We have to let them know what’s going on in our organization.” To find out if your chapter is active on Twitter, look on its Web site or do a Web search for the chapter’s name and the term “Twitter.”

On Facebook, more than 4,600 people “like” NHF and receive regular updates on events and HemAware articles. NHF has more than 900 people and organizations following it on Twitter. Followers receive links notifying them of NHF events, HemAware articles and other online articles about the latest research and treatment, and about people living with bleeding disorders. NHF also retweets many of its followers’ blog posts, photos and comments about hemophilia and VWD. Since hemaware.org was launched in March 2010, NHF has started three blogs on the site, all written by people living with bleeding disorders. (See “HemAware Bloggers.”)

Scroggins began following the HemAware blogs and several others soon after she started her own. “They understand. They’ve been there,” Scroggins says. “If I hadn’t found these people online, I’d probably be bald from the stress.”

Within three months of creating her blog, Scroggins had nearly 70 Twitter followers. She posts a new blog entry about every five to 10 days chronicling her family’s journey. She has posted on the sleepless nights, the frequent hematology appointments, and the anxiety and helplessness she sometimes feels watching her kids go through the challenges of having a bleeding disorder. A recent entry contained a poem about a pair of painful shoes that no one can relate to unless you walk in them, a metaphor about life with a bleeding disorder. Scroggins found the poem in a post by Ryan Rotenberry, LPN, 42, a blogger she considers a buddy, though they’ve never spoken.

From Needing Help to Giving It

Before blogging for HemAware, Rotenberry, of Forestville, New York, began a blog called Hemo Hijinks, after having similiar feelings of isolation that motivated Scroggins to blog. Working as a nurse, he often had to call in sick because of bleeds from moderate hemophilia A. Eventually, Rotenberry’s bleeds became so frequent he had to take disability leave.

Knowing no one else in his community with a bleeding disorder, Rotenberry looked for support online. His first stop was mybloodbrothers.com, a social networking site that recently migrated to a Facebook page. There, he met a woman who pointed him to resources that could help with insurance co-payments, out-of-pocket medical expenses and legal issues related to disability. The two remain close friends. Rotenberry also met Matt Stinger. Though they were 15 years apart in age, they related to each other as nurses with hemophilia. Stinger has severe hemophilia A. “I was having bleeds at work, too, having to call off sick or stop working,” says Stinger, a nurse at a pediatric emergency department in Philadelphia. “We were able to support each other through all that.”

Rotenberry’s and Stinger’s friendship progressed to Facebook and Twitter and then to texting each other. “Matt was supportive during a time when my employer wasn’t and nonhemophilia friends had a hard time understanding,” Rotenberry says. In November 2010, they met face-to-face in New York City. “He’s like my little brother from another mother,” he says.

As Rotenberry continued to blog and tweet about his experiences, he noticed a shift. Parents of newly diagnosed children and older children with bleeding disorders, as well as adults, began coming to him online, desperate for guidance. “I realized that my place in this community is not what I thought it was,” Rotenberry says. “I came looking for support, but now I’m more of a mentor.” Since launching the Hemo Hijinks blog in October 2010, Rotenberry’s attracted 391 regular followers to his two Twitter accounts. Of the 500 friends he has on Facebook, he estimates that about one-fifth are dealing with bleeding disorders. In February 2011, Rotenberry was invited to launch InFuzed, a spinoff of the Hemo Hijinks blog, on the HemAware Web site.

Although Rotenberry shares his experiences living with a bleeding disorder, he agrees with NHF’s warning statement that people should not take social media information as medical advice. “I’m not your doctor, and I’m not there treating you at that moment,” Rotenberry says. “What works for one person may not work for everyone else.” Any medical information or treatment advice found online should first be discussed with your HTC staff or physician. 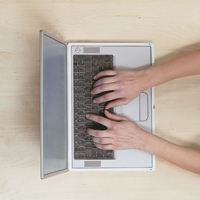 NHF also warns social media users to be cautious of the personal medical information they divulge online. Users should update their Facebook privacy settings so only their friends can view their page. They should consider anything that is posted to be public information, meaning any search of their name could reveal social media and blog postings. Insurers, employers, colleagues and others could potentially use this information to discriminate or exploit.

After answering an ostensibly innocent Facebook request, Rotenberry found that his personal information was being used by a salesperson to harass people for sales. “Don’t just assume that because they claim to be in the bleeding disorders community they should be your friend,” Rotenberry says. Further, be selective about what you share. (See “Learn More.”)

Connecting for a Cause

Social media can also be an extension of the connection people make at hemophilia summer camps, NHF’s Annual Meetings and chapter events. Anthony Romeo, 27, an actor in New York City with moderate hemophilia A, was planning to attend NHF’s Annual Meeting in November 2010 in New Orleans. Instead, he wound up at a local hospital after he sustained a head injury. “If you ever wanna feel unimportant, just go to the ER... seriously. Still here. Waiting... Grr. Argh,” he tweeted from the waiting room.

Instantly, responses came in from people at the conference, empathizing with him and updating him on what was happening. “As people with bleeding disorders, we are a small community, and we have to make our voices heard, but we haven’t had a venue to do that,” Romeo says. “Social media has enabled it.” He regularly tweets Rotenberry and Stinger.

Social networking is especially helpful for people who live in small towns or rural areas. Romeo grew up in rural Pennsylvania, 45 minutes from Scranton and an hour bus ride from his elementary school. Few of his classmates or neighbors understood his bleeding disorder or knew why he wore protective padding and a helmet. Today, families in rural communities can use social networking to connect with people who understand. They now have unprecedented access to treatment information that often took longer to trickle into smaller towns.

Social media has also allowed awareness of bleeding disorders to go global. Ryanne Radford, 28, of Calgary, Alberta, Canada, started her blog, Hemophilia Is for Girls, to raise awareness about the unique struggles of women with bleeding disorders. Radford has severe factor V deficiency, an extremely rare bleeding disorder with fewer than 200 known cases worldwide. A few months after the blog’s launch in February 2010, Radford began receiving messages from people around the world, including this one from a young man in India with severe hemophilia A:

…I have a family history of hemophilia and throughout my life it has caused me many problems. The medicine used to treat a bleeding episode is very expensive and hard to get. The Hemophilia Treatment Centre is far away and is hard for me to get to. I would love to improve my quality of life and would like to do so by opening my own business.

Radford receives similar messages from 15 Indian Facebook friends and Twitter followers. Their plight moved her to use her blog and Twitter postings to start a fundraising campaign for their medical expenses.

The shared feelings of empathy and responsibility are prompting more NHF chapters and individuals with bleeding disorders to form virtual bonds with people in other states, communities and even countries. In the digital age, physical distance is irrelevant. Understanding and helping are what count. Radford casually talks about her Indian blog readers and Twitter followers as if they had just spent time together. “I’ve never met my friends in India, but I think this cause has become close to my heart because I ‘talk’ to them every day.”