The National Hemophilia Foundation (NHF) is proud to announce that five local chapters are merging with it. The chapters will adopt the name, logo and brand of NHF, although they will retain their mission of providing services to their local constituents.

The impetus for the switch came out of the Access to Care Today, Achieve a Cure Tomorrow (ACT) initiative, launched by NHF in 2009, which aims to maintain or achieve access to care for people with bleeding disorders. This includes supporting state and federal advocacy efforts, and education for people with bleeding disorders, which local chapters provide. A key component of ACT is strengthening the capacity of local chapters to provide those services.

“By choosing to merge with NHF, chapters that might be struggling to maintain funding and infrastructure are given a chance to stabilize,” says Joe Kleiber, NHF’s vice president for chapter services. “It gives chapters an opportunity to grow and strengthens the NHF brand. The chapter services team will be working extensively with these chapters to build organizational strength where it does not currently exist.” 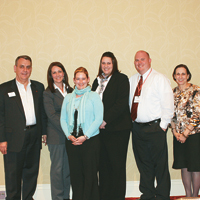 The five merged chapters—Colorado, Idaho, Nebraska, Nevada and Central Ohio—will give up their 501(c)(3) IRS nonprofit status and come under NHF’s 501(c)(3) status. Their current bylaws will be supplanted by NHF’s Merged Chapter Procedures and Guidelines, which were developed by a working group of board members of the merging chapters. By joining NHF, the chapters will have increased access to NHF staff for finance, development, and marketing and communications needs, including Web site and social media development.

“Our chapter chose to merge with NHF because we understood that NHF has the ability to support our area in a way that’s better than what we’ve been able to accomplish on our own,” says Kari May, executive director of the Idaho Chapter in Boise.

Nicole Rainey, executive director of the Nevada Chapter in Las Vegas, agrees. “Our new relationship will allow Nevadans to have better information on their bleeding disorder,” she says. “It will give us more tools to provide educational programs and seminars geared to our consumers and their specific needs.”

Rob Alexander, executive director of the Central Ohio Chapter in Columbus, is looking forward to NHF support in areas in which his chapter isn’t as experienced, such as marketing and grant writing. “The greatest benefit is that we go from having the resources that you typically find in a two-person shop to the resources you have in a 40-person company,” he says.

For Carl Clark, board president of the Nebraska Chapter in Lincoln, maintaining financial stability while retaining the chapter’s independence is crucial. “Funds raised by the local chapter will stay with the local chapter, and funds raised in cooperation with the national organization will be divided,” he says.