Every year, National Hemophilia Foundation (NHF) chapters can choose to recognize one dedicated volunteer with a Chapter Recognition Award, which is presented at the NHF Annual Meeting. The six recipients in 2010 were honored at the Annual Meeting Awards Luncheon in New Orleans on Saturday, November 13.

These chapter award recipients have spent many hours giving back to their local bleeding disorders community through chapter events, projects, administrative work and advocacy efforts.

Many NHF chapters could not survive without their dedicated volunteers. Combined, these six award recipients represent approximately 70 years of volunteering. 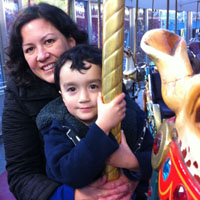 Bethanne Deuel with her son, Noah

How Deuel became involved in the chapter: About three years ago, she was classmates with Dutta Satadip, then president of HFNC (and now an NHF board member) while both attended the Haas School of Business at the University of California, Berkeley. After asking Satadip how she could help the chapter, he suggested she create a marketing strategy.

What chapter projects she helps with: Deuel worked with a chapter committee to develop a marketing strategy to broaden HFNC’s individual donor base, update its Web site, create a social media strategy and generate ideas for future marketing campaigns. From there, she began a rebranding project for the chapter. “We had a mission statement, but we had no tag lines,” she says. “We needed to be united on that front, especially as we sought new donors.” The chapter created a tag line, standard descriptions, a new logo and a style guide. For one year Deuel volunteered in the chapter office two days a week. She currently updates the chapter Facebook page.

What she likes best about her volunteer work: “There’s satisfaction in knowing that I’m doing something for a very good cause,” she says. “Seeing the kids benefit from all this is so heartwarming.”

What she would tell other families about getting involved with their local chapter: “The biggest reward is that you have support, community and understanding from those who’ve gone through it,” she says.

What the chapter executive director, Merlin Wedepohl, says about Deuel: “Bethanne’s marketing expertise and enthusiasm for HFNC to present our message in a powerful and professional manner have resulted in a new logo, tag line and dynamic look.” 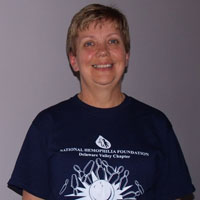 Patricia Felthaus at her chapter's Bowling for Fun event

Connection to bleeding disorders: Her youngest son, 18, has severe hemophilia A, as did her father.

How Felthaus became involved in the chapter: Her father died from bleeding complications when she was only 6, and her family didn’t talk much about hemophilia. Felthaus only learned she was a carrier after her third son was born. Her two older sons were unaffected by hemophilia, but her third child was diagnosed with severe hemophilia A after his circumcision wound would not stop bleeding. Soon after, Felthaus attended a chapter event and was later asked to join the chapter board. “Hemophilia was all new to me, and I wanted to be a sponge and get as much information as I could,” she says.

What chapter projects she helps with: Three years ago, Felthaus and another volunteer created the chapter’s Bowling for Fun event. Held on a Saturday every February, the event allows families to bowl together, enjoy a pizza lunch and sign up to win prizes. “The idea was that this would be an event the whole family could come to, and it would be affordable and fun,” she says. “This year we had to turn people away because we didn’t have enough lanes, so we’ve already booked the entire bowling alley for next year.”

What she likes best about her volunteer work: “It makes me feel so good to meet new families and let them know that, while hemophilia might seem overwhelming, our experience has shown us that you can successfully manage to get through each challenge. Our boys can live happy, healthy lives.”

What she would tell other families about getting involved with their local chapter: “Chapters have a lot of different events, including educational programs. It’s great to meet the wonderful bleeding disorders community and be able to connect with other families as a resource.”

What the chapter executive director, Ann Rogers, says about Felthaus: “Pat is a great example of philanthropy and volunteerism. She is a wonderful role model for others, especially other families affected by bleeding disorders. She has been an active volunteer for many, many years, both at the event and leadership levels, for the Delaware Valley Chapter. She has made consistent and substantial contributions while serving on the board of directors, and she holds our chapter families in her heart.” 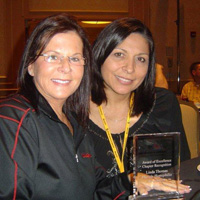 Linda Thomas, on the left, with another chapter volunteer, Marie Rubin

Connection to bleeding disorders: She has a son, 27, with severe hemophilia A, from a spontaneous mutation.

How Thomas became involved in the chapter: In 1984, she called NHF for help with an insurance problem soon after her son was born. She attended her first Annual Meeting when her son was 18 months old. “With no family history, I wanted to be educated about hemophilia so we could live a normal lifestyle,” she says. “I got very involved with my local chapter and have volunteered nonstop.”

What chapter projects she helps with: Thomas, who has only missed one NHF Annual Meeting in 25 years, served on her chapter’s board for 12 years, including as vice president and then as president for five years. She was very active in the chapter’s advocacy efforts, lobbying for guaranteed issue for small group insurance in Florida, which was implemented in 1990. Thomas also lobbied for the Ricky Ray Hemophilia Relief Fund Act of 1998. She was camp director for Dream Oaks Camp for four years.

What she likes best about her volunteer work: “I like that I could meet other families and help them to lead an independent lifestyle.” Thomas’s son is fit and athletic, and shes like showing new families that their children can lead an active lifestyle, too. “I enjoy letting other people see, that, yes, hemophilia is a chronic illness; however, it’s very manageable.”

What she would tell other families about getting involved with their local chapter: “They should be involved for education. In Florida, we have an annual meeting, and we have about 400 families come every year. They can learn from the guest speakers about nutrition, exercise, sports, but it’s also important to meet industry representatives. Families need to understand the different products so they can make educated decisions.”

What the chapter executive director, Debbi Adamkin, says about Thomas: “Linda has dedicated so many years to the chapter, lending her expertise, fighting for legislation, helping other families. We value her commitment and dedication to our chapter and the community.” 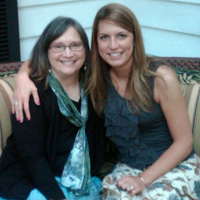 Connection to bleeding disorders: Fletcher was diagnosed with hypodysfibrinogenemia, a type of factor I deficiency. She has both bleeding and clotting problems.

How Fletcher became involved in the chapter: After years of bleeding problems, Fletcher was diagnosed three years ago and attended her first women’s retreat through the chapter. “I got heavily involved with the chapter immediately.”

What chapter projects she helps with: Fletcher is the chapter’s research and special programs coordinator. She has a PhD in social work and an advanced degree in gerontology, expertise that has helped her write several grant applications for the chapter, including those for research on aging and hemophilia. In fall 2010, she helped create Support, Outreach, Advocacy and Resources (SOAR), the chapter’s program for girls and women with bleeding disorders. SOAR gatherings have allowed women in the community to develop close friendships. “It’s been great for the women in the chapter,” Fletcher says. “We’re realizing more and more women need a place to talk.” The chapter teamed up with artist Anne-Marie Iselin to develop a line of limited-edition jewelry handcrafted from paper. Proceeds support the SOAR program. Fletcher also helps give presentations about women and bleeding disorders around the state.

What she likes best about her volunteer work: “The women—the people I’ve met have been tremendous,” she says. “I feel like we are really making a difference.”

What the chapter executive director, Susan Cowell, says about Fletcher: “We are thrilled with all of the assistance that Dr. Sue Fletcher has provided to HNC. She brings such passion to our SOAR program and has added her expertise in grant writing, evaluations, and research on aging and hemophilia. Our organization is so fortunate to have Sue as a part of our team. We can’t thank her enough for sharing her time and talent to help the community.” 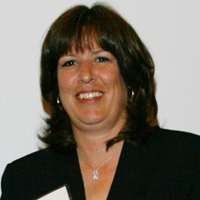 Connection to bleeding disorders: Glass, her father and all three of her children have type 2 von Willebrand disease.

How Glass became involved in the chapter: Although Glass and her father had experienced bleeding problems and bruising their entire lives, they went undiagnosed for many years. After Glass’ father married a physician’s assistant, his new wife recognized that his symptoms weren’t normal. That’s when he was tested for a bleeding disorder. Glass and her children were then tested and began attending chapter events.

What chapter projects she helps with: Glass has been involved with the chapter for the past 20 years. She was elected board secretary in 2003 and appointed president in 2005 to fill the unexpired term of the resigning president. She was then elected to two terms as president and served in that role until October 2010. Glass has now turned her attention to the Women’s Task Force. She continues to support the chapter’s Matteo Memorial Golf Outing fundraiser, as well as the Black and Blue Ball. She also helped organize a charity luncheon featuring actress Gwyneth Paltrow. Paltrow’s aunt, the late Randi Paltrow, was the chapter’s executive director at the time.

What she likes best about her volunteer work: “I have gained so much from the community. It was very important for me to give back. I’ve met so many wonderful people.”

What she would tell other families about getting involved with their local chapter: “They can benefit from the education they get from the community. It’s nice to just be able to socialize and find out you’re not alone, that others are going through the same things you’re going through.”

What the chapter executive director, Lynne Capretto, says about Glass: “Teresa is one of the top five volunteers with whom I have worked during my 40+ years in nonprofit management. She is smart, never loses her cool and has the ability to lead volunteers through a productive and positive decision-making process. As president, she led our board of directors through some very difficult issues and left the chapter much stronger than it was at the beginning of her term.”

What chapter projects Collins helps with: She has helped the chapter with administrative tasks and manned a chapter booth at a local health fair. She serves on the chapter’s walk planning committee.

What the chapter executive director, Rob Alexander, says about Collins: “Lisa is one of those go-to kind of people you can count on to help you when you most need it. I’m always dropping things off at her house for her to work on.”