History of Hemophilia Awareness in Alaska

Like many parents of children with hemophilia, Louise and Wayne Cobb did not know other families in their situation when their three sons (born in 1971, 1975 and 1976) were diagnosed with severe hemophilia. As their children grew older and hemophilia became linked in the public’s mind with AIDS, they faced the social stigma associated with the disease. Unlike many families, they had no local chapter or hemophilia treatment center (HTC) to turn to for support. Their regional HTC, Oregon Health Sciences (OHS), was at the University of Oregon in Portland. The Cobbs lived more than 2,000 miles away in Anchorage, Alaska.

“We knew there must be other families with hemophilia in Alaska,” Louise says. “But we weren’t in touch with them.” In 1976, OHS began providing services to Alaska by sending a doctor and nurse across the state once a year to see patients in their homes or primary care physicians’ offices. The Cobbs realized that if they wanted a support network for families with hemophilia, they had to build it themselves. In 1988, OHS mailed a letter the Cobbs had written to its Alaska patients to gauge their interest in creating a support system. That’s how the seeds of the chapter were planted.

One of the first issues the nascent chapter, not affiliated with NHF, addressed was a loss of HTC treatment in Alaska. An Alaskan patient with hemophilia filed a lawsuit in 1988 because of factor contaminated with HIV. “When you file a lawsuit like that, you go after everyone who is remotely associated—the pharmaceutical companies, the hospital, the doctors, the treatment center, everyone,” Louise says. After that, the OHS doctor and nurse could not travel outside the state to treat patients. No one from OHS came to Alaska for three years, Louise says.

While taking classes to obtain a college degree in social work, Louise conducted a research project on the need for hemophilia treatment in Alaska. In 1992, she presented her research to the Maternal and Child Health Bureau (MCHB) in Atlanta. MCHB agreed with the need for treatment in the state, but couldn’t formulate a plan to deliver services due to the many barriers revealed by Louise’s research.

The Cobbs and other families decided to incorporate as a nonprofit. In 1991, MCHB awarded grant money for the Alaska Hemophilia Association to set up a hemophilia treatment program.

But the MCHB funds were not accessible until 1992. NHF gave support and funding to help the chapter get started, and some pharmaceutical companies provided funds for the chapter’s first comprehensive clinic. The Cobbs enlisted adult and pediatric providers, both locally and from West Coast HTCs, and organized the families to fly in for treatment. After this first comprehensive clinic, held at the office of the Cobbs’ pediatrician, the three-day semiannual clinic alternated between two major hospitals in Anchorage. In 1993, the alternate hospital had a nurses’ strike two days before the scheduled clinic. So many patients had to be moved that the hospital no longer had room for the clinic. The Cobbs then moved the entire enterprise into the bed-and-breakfast they operated in their home in Anchorage. “We had 24 hours to turn it into a clinic,” Louise says. 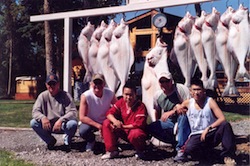 Alaskan campers in 2004 proudly display their catch of halibut.

To the Cobbs’ surprise, the new arrangement was well received. “We figured the families would like it, because the kids could play video games or shoot hoops while they waited,” she says. She didn’t expect a similar reaction from the providers, but they were enthusiastic as well. “So for the next 15 years, until about 2010, we turned our home into a clinic twice a year.”

The Cobbs took a similar approach in setting up their bleeding disorders camp. In 1991, they held their first family weekend event. After five years, it became an adventure camp for men and boys ages 12 to 30, offering fishing, whitewater rafting and other outdoor activities. As the demographics of their community changed, the Cobbs created a more typical summer camp, open to kids with bleeding disorders and their siblings, ages 6 to 16. When the camp opened last year, Wayne credited the camp’s success to what he calls “an all-star team” of volunteers from Hemophilia of Northern California’s Camp Hemotion.

The camp was held at Meier’s Lake in Wasilla, a camp and conference center. “We had education, campfires and swimming—in 42-degree water, but we swam,” Wayne says. The chapter is currently planning the 2013 camp, scheduled for five days in July.

Running a camp in Alaska has unique challenges. “The biggest problem is getting the kids into Anchorage,” says Wayne. Alaska is the largest state in the Union by land area, yet it has only one road that runs from Fairbanks in interior Alaska to the Kenai Peninsula just south of Anchorage. For many people, flying is the only way to travel long distances, and only the major cities are served by commercial airlines. That means some people travel up to 2,000 miles to get to the camp.

The Cobbs are thankful that Providence Hospital in Anchorage, with the support of OHS, has taken over the medical management of the HTC and treatment of Alaska’s families with bleeding disorders. The Alaska Hemophilia Association will continue to provide support and advocacy.

As for the Cobbs, they are happily passing the torch to the next generation. In 2012, the chapter joined NHF as its 51st affiliated chapter. Matthew Findley has assumed the role of president, and Louise will no longer serve as executive director. “We’re getting an infusion of enthusiasm from other people,” she says.

The Cobbs are pleased with what they’ve built for the Alaska bleeding disorders community. “As long as the level of treatment stays as good or even better, I think we’ve accomplished our goals,” Louise says.