In each issue of  HemAware, we take a look at how NHF chapters and associations are making a difference in their communities.This month we talked with Sue Cowell, executive director of Hemophilia of North Carolina, a chapter of the National Hemophilia Foundation.

Why did you decide to start a group for the Latino population?

We get a lot of our ideas from our hemophilia treatment centers (HTCs), the Harold R. Roberts Comprehensive Hemophilia Diagnostic and Treatment Center at the University of North Carolina at Chapel Hill and the HTC at Wake Forest University School of Medicine in Winston-Salem. The staff at the HTCs said that the Latino population in North Carolina was increasing and that it was a group we should target. So along with one of our members, Guillermo Sanchez, we decided to form a networking group, Unión Latina de Personas con Hemofilia.

What does the group do?

It meets once a month, usually in a restaurant. We invite an expert to speak on a topic of interest to the community. It’s completely in Spanish. All the educational materials that we provide are in Spanish, as well. We typically don’t work with any translators, because a lot of these topics—insurance, for example—can be difficult to understand at the best of times, and we don’t want anything to be misunderstood. So far, we’ve had programs on support and networking, the importance of HTCs, patient choice, and healthy living and exercise. Dr. Harold R. Roberts from the University of North Carolina at Chapel Hill presented a great program in Spanish to the group at our Hispanic Heritage Celebration. Our meeting next month will be on genetic testing and inheritance. The senior genetics counselor from the Hemostasis and Thrombosis Center at Duke University Medical Center will be our speaker.

Is creating a group for the Latino community different than any other group? 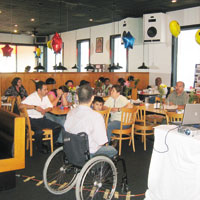 It’s been a learning process. For instance, the first meeting we had was in a steakhouse, and we had really low attendance. When we asked around, we found that a lot of people didn’t like the venue—it wasn’t a place they wanted to go to. So the next meeting, we had it in a local Mexican restaurant, we hired a mariachi band, we had entertainment for the kids—and the attendance doubled. It’s very important to listen to the community and see what they want. It’s important that they be family events, so we always have something for the kids to do while the parents are listening to the speaker. We’ve discovered that word of mouth is the most effective way to get interest in the groups, rather than more traditional marketing.

It’s paid off. We have some families that drive a long way to come to these events, so it seems like it’s working.

How is it paid for?

The program was not initially funded, but we just received a $3,000 grant from Baxter. We’re looking for long-term funding in hopes of supplying enough money so maybe we could provide a salary for our Hispanic liaison and, hopefully, take it regional or at least wider than the Charlotte area. Baxter has a Spanish-speaking educator, and she came down and spoke to the group as part of the company’s Facts First program.

If another chapter wanted to start a similar group, what advice would you give?

I would first recommend contacting the HTCs and finding out what they’re hearing as far as topics and needs, and work out the best way to reach out to the group. Second, I would talk to other chapters that have experience with similar groups. We contacted chapters when we were getting started, and I found that the tips they gave were very helpful about understanding the culture and what would attract a group to an event. We made some minor mistakes because there were some things that we didn’t understand or know about the community. It’s a very close-knit, family-oriented group, and you need to build confidence with this community so they are comfortable attending the events.