In each issue of HemAware, we take a look at how NHF chapters and associations are making a difference in their communities. In April 2010 the Central Ohio Chapter held a successful fundraiser starring ’80s rock icon Rick Springfield. We spoke to Rob Alexander, the chapter’s executive director.

Did your chapter have any affiliation with Rick Springfield before the concert?

Rick Springfield has no ties to hemophilia. We chose him only after researching how much revenue his concerts brought in when he performed in Ohio or in similar-sized venues in the Midwest. We went through the traditional means of contacting his agent and renting the venue. We got a small break for being a nonprofit, but we had to pay to have him and take the risk that the event would make enough money to cover our expenses. It was a significant upfront cost.

Isn’t that risky for your chapter?

Your profit margins can be great if you pick the right band, or they can miss the mark if you pick the wrong one. It really comes down to doing the research and making sure you get the best price you can.

Did you have any outside support?

We brought in around $35,000 from corporate sponsors. Most traditional concerts only make money through ticket sales, so that eliminated a lot of the financial risk for us. The hemophilia industry really latched onto this event, if for no other reason than it was unique and a whole lot of fun.

Did Springfield help promote the event or your cause?

Absolutely. He gave us a large number of meet-and-greet passes, donated a significant percentage of the merchandise sales to us and allowed us to run some creative promotions to his very active fan club. But the coolest thing he did was let us raffle off a guitar that he signed backstage at the show. He provided that guitar to us for what it cost him, which saved us a lot of money. Between the guitar raffle and the merchandise sales, we added an extra $2,300 to our bottom line.

How did you promote the event?

The venue where we held the event has a good relationship with all the promo managers of all the radio stations around here. We gave the stations a set number of tickets to give away to their listeners, and they talked about it a certain number of times on the air. The value of this airtime was more than $100,000. The venue staff really helped us out tremendously. They created and placed ads in newspapers in the Columbus area. They even created a television commercial, which we ran during General Hospital, which Rick Springfield used to be on. It was amazing to hear the buzz in Columbus during the week leading up to the show. 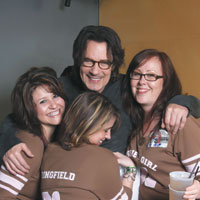 How was the concert itself?

It was a very cool thing to be backstage and to meet Rick Springfield, to see a line of people that curled around the block waiting for the doors to open, and to look out at a crowd of more than 1,000 people and realize it was for our chapter. The concert itself was a huge success. The women absolutely went nuts for Rick, especially when he went out into the crowd and came out for his encore shirtless.

Will you do this again next year?

Yes, but we don’t know who we’re going to pick or what type of event it’s going to be yet. But we’re going to look at ways to be smart about structuring the contract ahead of time so the artist we choose agrees up front to do four or five different things to help us to raise money. We didn’t do that this time. We’re not concert planners, and we’re learning as we go. And even though there was a lot of risk, this was much more than just a fundraiser. It also generated a huge amount of public awareness. Many of the radio stations mentioned this was a benefit for the Central Ohio Chapter of the National Hemophilia Foundation, and that did a lot to build name recognition in the Columbus area.