Shooting for a Cause in Louisiana

Lori Keels, executive director of the Louisiana Hemophilia Foundation (LHF), had just learned there was a threat of tornadoes across the region March 3, 2012, the date the chapter planned to hold its 13th Annual Shoot for the Cure fundraiser at Riverside Sporting Clays in Denham Springs, Louisiana. The shooting club informed her that LHF would have to reschedule. Although this left the chapter scrambling to accommodate the change, Keels acknowledged the necessity. “We don’t want people shooting rifles in the middle of a tornado,” she says.

The yearly sporting clays fund­raiser, rescheduled for May 5, draws 128 people who shoot clay targets fired into the air from a set location known as a stand. Unlike skeet shooting or trap shooting, where targets are released one at a time on a specific trajectory, sporting clays are released in a manner simulating the unpredictable flight of birds.

A clay-shooting enthusiast named Wayne Benbow, the grandfather of a boy with hemophilia, initially suggested the fundraising idea to LHF. Since its inception, the shoot has nearly doubled in size. Twenty-eight teams are registered this year, with 16 teams each participating in either a morning or afternoon session. But as the shoot has grown, so has the effort needed to make it run smoothly. Keels says organization and preparation are the keys to making it work.

“We prepare as much as we can ahead of time,” Keels explains. “The shoot starts at 8:30 a.m. We’re barely in the door at 7 a.m. before our guests start arriving, so we make sure that all of our volunteers know exactly what to do the minute they get there, whether it’s hanging banners, setting up registration tables, or getting the food out for the shooters.” The chapter provides breakfast for the morning shooters and lunch for both groups. “We have a big pot of jambalaya ready by 11:30,” she says. “And a grill going with hamburgers, sausages and hot dogs all day long.” 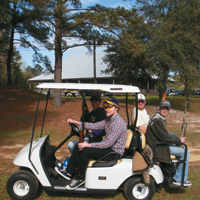 Participants travel in style using
golf carts during the event.

The chapter’s fundraising goal this year is to make a net profit of $22,000. There are considerable upfront expenses, and Keels points out that balancing amenities for participants with making a profit can be difficult. The club allows a maximum of 16 four-person teams on the course at one time, meaning the chapter can have no more than 128 participants. LHF provides golf carts to the shooters, too. And it moved the shoot from a public shooting course to Riverside, a private club with a wooded terrain, because it finds that a private environment is more attractive to participants.

But holding the shoot at the private club is more expensive. LHF reluctantly raised the cost for participants from $550 to $600 per team this year. It costs the chapter about $8,000 to hold the event, which is double last year’s amount, Keels says. Corporate sponsorships help offset the costs. Novo Nordisk, Baxter, Bayer and CSL Behring are sponsoring the event this year. “If we didn’t have those sponsorships, we couldn’t hold the event,” Keels says.

The fundraiser has also found success beyond the monetary kind. The majority of participants are not from the bleeding disorders community. “A good many of the people who come to shoot have actually joined our chapter as members, and they renew yearly,” says Keels. Without the shoot, she doubts many of the participants would have heard about LHF. “For our community members, we hold educational events that help them. But it’s really the people outside the community who make this event possible,” Keels says.

Read more about Shoot for the Cure.