HemAware “Takes 5” with people in the bleeding disorders community and spotlights their efforts with just five questions. Here, we talk with Ben Gruher, 11, son of Jim and Monica Gruher of Camas, Washington. Ben, who has severe hemophilia A, is a champion golfer with a handicap of “about a five,” he says.

When I was 3, my grandma gave me a set of plastic golf clubs as a gift. I loved hitting the ball with the clubs, just fiddling around and teaching myself. My parents saw how much I enjoyed playing, so they arranged for lessons and camp at the public golf course. The CSL Behring Junior National Championship Tournament was nearby, so I entered when I was 5 and had a lot of fun. I entered again when I was 7 and won the tournament.

What has been the highlight of your golfing career so far?

I really enjoy the World Championships in Pinehurst, North Carolina, run by US Kids Golf. The participants are the champions from each state and country, so it’s the best of the best. When I was 9, I placed 13th out of 150 top kids in my age group, which was amazing. The surroundings are very professional, and the players are high caliber. I enjoyed meeting kids from exotic areas around the world, like Zimbabwe and South Africa.

How does hemophilia affect your golf game?

Normally I infuse three times a week. During the summer, I plan the infusions around my golf 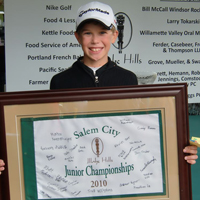 schedule and always infuse before a tournament. Early last summer (2010), I participated in a major tournament, the Oregon Junior Amateur. It was five days long, one day of stroke play and four days of elimination match play. After the second day, I went bike riding with my uncle and was hit by another biker, who was texting while riding. I fell off my bike and landed on my knees. My knee joints started to bleed, so we consulted with the local hemophilia treatment center (HTC). They advised I could play but I shouldn’t walk, even though one of the rules was you had to walk. We had a lot of conversations with the tournament director, who finally agreed I could use a cart.

The HTC was right in their advice for me to not walk 18 holes. I made the finals and was able to walk again on the last day. It came down to the last putt. I was beaten on the 18th hole.

You’ve achieved great success at a very young age. What plans do you have for the future?

I’m going to take golf as far as I can. I hope to earn a college scholarship at a big school and play professionally when I’m older. I admire pro golfer Phil Mickelson a lot. I like his attitude. He’s very professional and has a lot of respect for other players. He’s my role model.

What advice would you share with other kids who have bleeding disorders?

I would advise them to keep trying to find a sport or a hobby that is safe and that they enjoy. I found golf, which is a safe sport, and I love to play. I stuck with it from when I was very young and hope to take it as far as I can. The important thing is to find out what you’d really enjoy and discuss it with your parents.