Nick is a member of the National Youth Leadership Institute (NYLI), which provides training in leadership, problem solving and advocacy to its members, young people (ages 18–25) who are then challenged to apply their skills to enhance programs in their local chapters. In February 2008, Nick was a counselor at the first NYLI Teen Retreat.

On February 6, 2008, more than 20 NYLI members and National Hemophilia Foundation staff put a halt to their normal lives and boarded planes around the nation, heading for Camp For All in Burton, Texas. For me, Texas weather meant leaving behind the below-freezing temperatures of New Jersey and flying into a surreal 60-degree­ paradise. No complaints here.

We had been talking about this retreat since the very early years of NYLI, and we were finally going to pull it off. In just two days’ time, 50 teens (between the ages of 13 and 17) who are affected by bleeding disorders would fly in for the first-ever nationwide NYLI Teen Retreat. As counselors, we hoped to give these teens a chance to see how their peers are affected by bleeding disorders and to foster unity at a national level. We hoped to accomplish that through team building, challenges, discussions and, of course, fun.

The next day, we got down to real business. Pat Torrey, known affectionately by his campers and fellow staff as “Big Dog” (envision a cross between a puppy and a grizzly bear), ran us through the next three days of facilitation in a single-day sprint. When we counselors finally piled into the cabins late that night, we had a much better sense of what we had gotten into as well as the tools we needed to make the Teen Retreat spectacular. 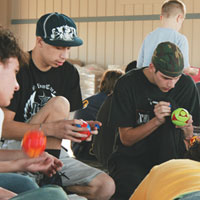 At some deathly early hour on Friday morning, the staff piled into the bus to go back to the airport to await the arrival of our campers. The rest of the day was spent on some seriously intense card games, magic tricks, guitar playing and buzz-ring practice and was finally topped off with a nice, long bus ride back to the camp.

The next two days were the most amazing learning experience of my life. We started off with high-energy activities, then worked our way to team-building challenges, built up to thought-provoking discussions and finished each night with a campfire party. Though each and every part of the Teen Retreat was special in its own way, it was the willingness to share during the discussions that truly touched me. Difficult questions such as “Would you conceive children if you were certain they would have your medical condition?” were answered with incredibly moving honesty by campers and staff alike. With each person who was willing to share, the group was entrusted with a rare window into that camper’s personal viewpoint. Because the group respected that trust, we were all able to grow.

I had come to the Teen Retreat worried about what I could teach my campers. As it turns out, I ended up doing most of the learning. The campers seemed to do just fine teaching each other. I taught my cabin the basics of buzz rings on the first day at the airport, and they ended up blowing me away with their tricks over the next two days. I facilitated a discussion about leadership, and their answers broadened what I had once thought was a pretty narrow definition.

At one point during the retreat, someone said, “Look at the faces all around you. These are the people you’re going to be working with for the rest of your lives. These are the future leaders of tomorrow.” Looking around at these bright young faces, I could see how true that was. Each and every person came to the Teen Retreat with a unique set of skills, but we all left united as leaders.