Contrary to popular belief, men do like to talk. It turns out that men in the bleeding disorders community have a lot to talk about. The life stories of 21 men with hemophilia, with additional material contributed by their healthcare providers, are chronicled in the book The Gift of Experience: Conversations About Hemophilia by Laura Gray and Christine Chamberlain (The Boston Hemophilia Center, 2007). The book developed from an oral history project the authors conducted at the Boston Hemophilia Center from 2004–2005.

Gray’s role as the social worker at the Boston HTC for the past 10 years provided her with the idea for the project. Seeing the men on a regular basis and serving as a resource for them, she couldn’t help but be drawn into their struggles and their stories. With a passion for seeing the stories live on, Gray and Chamberlain conducted the interviews, then carefully selected the material for the book.

“I believe that what they have to say is critical not only for kids and families growing up with hemophilia today, but also for those who study the disease and want to better understand its effect on people’s lives,” says Gray in the introduction.

Giving an oral history helps a person understand his or her life experiences over a long period, says Chamberlain, who is a principal partner of Camden Writers, a company in Maine that produces oral histories. Prior to the hemophilia project, she had conducted oral histories with breast and ovarian cancer patients.

“People want to talk. It’s very unifying,” says Chamberlain of oral histories in general. For many of the men quoted in the book, the project provided a novel opportunity: talking about their entire life with no holds barred. Having survived the HIV/AIDS and hepatitis C crises, most had learned to be selective about what they shared, with whom and when. “We tend to compartmentalize our lives,” says Chamberlain. “This provided a new way of looking at their whole life.”

“Hemophilia is a lonely disease,” says Gray. Most men do not have much day-to-day contact with others with similar diagnoses. “For these men in particular, growing up in the period they did with no treatment available to them for a good part of their lives, they learned to just tough it out and didn’t really talk about it to anybody.” Opening up for the project gave the men deeper understanding into how their disease had affected their decisions, their friends, their families, themselves.

One might assume that sharing a history of pain, suffering, loss and disappointment might be painful and not very productive. “While telling their stories elicited painful memories for the men, what we heard much more was how helpful it was,” says Gray. In fact, sharing memories over their life span often summoned buried thoughts and feelings that the men then shared with family members and friends for the first time. “One fellow told me that it’s the best book he’s read that really describes his experience,” says Gray.

Giving a Gift to the Community

Favored books tend to be the ones that change us in some way or reveal something new to us. For both authors, conducting the hemophilia oral history project became a labor of learning. “What I learned was that these men wanted to give something back,” says Gray. “A lot of them agreed to do this because it was proposed that not only would they gain something, but also they were really giving a gift of their experience to the community.”

Many themes emerged as the interviews were conducted. One was resilience. “What I was really in awe of was how it didn’t crush them,” Gray says. She felt the weight of not only the hemophilia diagnosis and all its complications, but the added burden for some of HIV and hepatitis C. And of all the losses they suffered—the deaths of brothers, cousins, friends, fathers.

Yet, pity was rarely expressed. “There was not a ‘poor me’ feeling to any of this,” Gray says. “There was less bitterness than I would have expected,” adds Chamberlain. The men coped by making necessary accommodations, she says. “Most of us live a life of acquiring things,” says Chamberlain. “These men have learned how to live gracefully.”

Gray says she was amazed by the number of men who expressed gratitude, despite all the hardships they had endured. Through them, she says, she learned “how love and humor and support and determination can really help you manage to plow through these kinds of things. The men’s attitude was, ‘This wasn’t easy, but hey, it was our life.’”

Chamberlain remarked on the faith theme that pervaded the stories she heard. “Many had a lot of spiritual faith. That was an important component for them,” she says.

Another common theme was pain. “Most of them had incredible pain throughout their lives and incredible tolerance for pain,” Gray says. She found it curious that many men learned to cope so well with pain that they resisted seeking treatment even when it was readily available. One benefit of the study was that several men were persuaded to receive comprehensive care at the center. By explaining what was now available to them, a number re-engaged at the center. “They don’t need to tough it out anymore,” Gray says.

“The social aspect of hemophilia was very powerful,” says Gray. Men shared with her anecdotes about being kicked out of school, the fear of revealing their diagnoses to the insurance company and being hospitalized for months at a time without seeing their parents.

While some felt rejected or ostracized, others felt included. Although many men were warned by parents and providers not to play sports, some did. Others sat on the sidelines, still feeling like they had a place on the team or in the game.

Not only did the authors interview patients, but they also turned on the tape recorder for providers to share their thoughts and experiences. The interviews provide a powerful look into the psyche of providers who were facing the uncertainty of HIV/AIDS and, later, hepatitis C, without the information they needed. 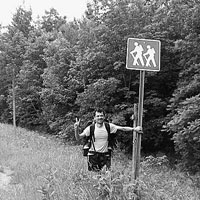 Roy Arruda hiking the Appalachian Trail. (He has since passed away.)

“Physicians who were used to ­giving facts based on fact didn’t have that. These interviews speak to how the doctors were grappling with this along with their patients,” says Gray. The interviews reveal the different treatment approaches individual physicians took with their patients during a difficult time. Whether to encourage patients to continue using factor, a life-saving treatment, was not straightforward. “It was a real dilemma,” Gray says.

“What the interviews do is give a human face to people—the patients and caregivers—trying to sort through all these questions, fears and concerns that had no clinical answers,” says Gray.

The interviews also reveal a common theme expressed by many providers in the healthcare community: how honored they felt to treat the patients under their care. Treating a patient with hemophilia meant interacting with the family as well. “These people became part of each other’s lives in a very deep way,” Gray says.

Through the interviews, the book offers an historical timeline of the medical history of hemophilia during the 20th century. The convenience of readily available clotting factors, for example, meant a new lease on life for most of the men. No longer required to sit still for hours waiting for plasma to slowly drip into their veins, this discovery alone contributed to a quality of life—and freedom—most had never experienced.

Theodore Frost, the oldest participant in the project, was born in 1915. He spoke of his experiences growing up in Haverhill, Massachusetts. When he was 5, he was dragged from the back of a truck, which caused skull fractures that kept him in the hospital for nearly three years. Several years later, Frost’s younger brother, also a “bleeder,” hit his head on a sidewalk curb and died. Their mother had a breakdown over the loss. 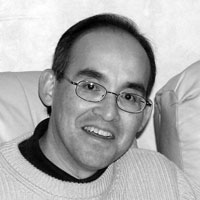 Frost remembered the advent of factor VIII as a turning point in his life. He was in the hospital with kidney stones and had been hemorrhaging for two weeks. The factor product was flown from California to Boston and transported to the hospital by the Haverhill Police Department. It saved his life. Frost marveled at how much more easily his healthcare needs were met after that. He died at the age of 91 in 2006.

Several men recalled how cold the plasma and cryoprecipitate treatments felt when they received them as children. Others commented on the social stigma associated with hemophilia, HIV and hepatitis C, and the impetus that gave them to become activists. Most convey a sense of wonder at all they’ve been through and the people who have helped them over the years.

“This group of men is getting older. These stories are going to be gone,” says Gray. The stories they relate are from a time period not that long ago. “We are talking about recent history and how different it is now.”

The Gift of Experience is about men with hemophilia, but shares themes that are universal to all of us: coping with adversity, giving and receiving help, and making the most out of life. “So many of the quotes are meaningful for people with hemophilia and for those dealing with other aspects of loss,” says Chamberlain. “For anyone needing encouragement, the reflections in the book will be very helpful and positive.”

“The sense of community—of not being isolated, of not being the only one—is very powerful,” says Gray.