Hosted by the National Hemophilia Federation (NHF), the upcoming World Federation of Hemophilia (WFH) 2016 World Congress is expected to be the largest meeting of the global inherited bleeding disorders community. The congress will be held in Orlando, Florida, from July 24 to July 28—making this the first time in more than 20 years that it’s been held in the US.

An outstanding level of cooperation between the medical and multidisciplinary Program Committees in developing the WFH 2016 Congress Program ensures that this year’s congress represents the entire community. The program caters to a wide range of interests and expertise, from patients to clinicians.

The congress will take place at the Gaylord Palms Resort and Convention Center in Orlando and begins on Sunday, July 24, with professional development sessions and workshops, followed by the Opening Ceremony. In addition to the customary nursing, psychosocial, orthopedic and physiotherapy sessions, the WFH committees have developed new presentations this year. Topics include genetic counseling, current issues in the diagnosis and management of von Willebrand disease, clinical research and data collection.

The congress will feature daily plenaries from Monday to Thursday.

Michael Lutomski, former NASA International Space Station (ISS) Risk Manager, is the keynote speaker on Wednesday, July 27. In his position at NASA, Lutomski was responsible for defining and implementing the qualitative and quantitative risk management processes for the organizations and international participants of the ISS program. He retired from NASA in 2013 and joined Space Exploration Technologies, or SpaceX, where he works as the director of System Safety and Risk.

For the first time, the general plenary will be followed by two concurrent medical and multidisciplinary sessions. (See below for sessions.)

Patrick James Lynch, creator, executive producer and star of the award-winning hemophilia comedy web series, “Stop the Bleeding!” will be sharing his personal presentation called Empowerment Through Self-Care. “WFH’s 2016 World Congress will be the largest gathering of our community, I was absolutely honored when asked to be a speaker,” says Lynch. Lynch’s presentation stems from the death of his brother from a hemophilia-related bleed. “Redirecting the energy from the deep sadness I felt toward creating something productive and useful in my brother’s name lead me not only toward finding peace and purpose, but also toward caring more about myself.”

The final plenary on Thursday, July 28, will explore “What is a bleed” as defined by a patient and “What is the response to treatment” as defined by healthcare professionals.

Outside of sessions, there will be many ways to unwind and mingle. These include the Opening Ceremony, a lunch conference with a veteran astronaut at the Kennedy Space Center and a networking reception at Disney’s Epcot theme park. The full program of events is now available on the WFH 2016 World Congress website: www.wfh.org/congress/en/program-details. 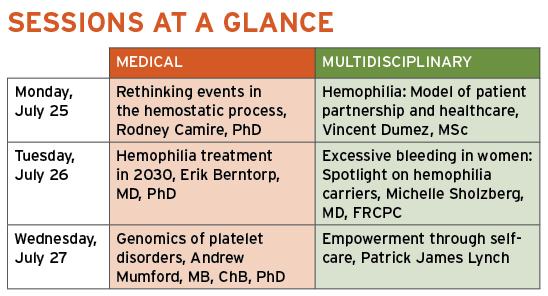