Kim McLaughlin knew that her daughter, Megan, 12, could get hurt like any other child at school, perhaps in gym class or during an after-school activity. But what concerned her was the possibility that school staff would not take an injury seriously. This happened four years earlier at a different school when Megan cut her hand on the playground. The bleeding continued for eight hours, and no one from the school called to tell Kim. Such nonchalant reactions were a dangerous risk, because Megan has type 1 von Willebrand disease (VWD).

Immediately after the injury, Kim, 37, a health insurance customer service representative from Schererville, Indiana, knew she needed something that explained her daughter’s condition, how it can be managed during the school day, what steps to take in case of injury, and how Megan and school staff can prevent injuries. She needed a Section 504 plan.

The Right to an Education

A Section 504 plan lays out the terms for staff to deal with students who need special accommodations to fully participate in school. It stems from a provision in Section 504 of the Rehabilitation Act of 1973, which requires that individuals with disabilities receive protection from exclusion or discrimination within any program or activity funded with federal tax dollars, such as a public school or a private school that receives some federal funding. Disability is defined as  any condition that causes a physical impairment, which includes bleeding disorders.

For children with bleeding disorders, that means public school districts are required to provide “free and appropriate public education,” regardless of the disorder’s nature or severity, according to the US Department of Education. The guidelines and requirements within the student’s 504 plan are legally binding for one school year and must be reviewed annually. As long as the plan has not expired, its enforcement is guaranteed by state education departments and ultimately by the US Department of Education’s Office for Civil Rights.

Kim worked with a patient advocate at the Indiana Hemophilia & Thrombosis Center in Indianapolis to draft a three-page 504 plan for Megan. The plan serves as a protection against school staff who might dismiss real preventive measures for Megan’s condition as “just another kid trying to skirt school rules.” When Megan, a rising seventh grader, has to go to the bathroom nearly every hour during her menstrual cycle, Kim can use the 504 plan to remind school staff that her daughter’s not intentionally skipping class or arriving late. Kim included elevator access in her daughter’s plan because Megan has a congenital disorder, unrelated to her VWD, that makes it difficult to see beyond six inches without glasses. The eye condition has led to falls on the school stairwells. The plan also prevents gym teachers from pressuring Megan to participate in contact sports, an activity that her 504 plan prohibits.

“I am not shy about what I want them to do for Megan,” Kim says. “It might be excessive to them, but this is my child’s life. She has to have the same good care at school that she receives at home.”

Before drafting a 504 plan, the first step is to decide whether the child actually needs one, says Doreen Rousseau-Purdy, a high school psychologist at Mexico Academy and Central School District in Mexico, New York. “The purpose is to give access to education,” she says.

Rousseau-Purdy reviews and drafts dozens of 504 plans for students in her school district each year. She has also written them for her two sons, both of whom have severe hemophilia A. The 504 plan provides the evidence you need to show that bleeds interfere with your child’s education. “If there is any difficulty, it’s better to be prepared,” she says.

For students with milder bleeding disorders who do not have many restrictions, a health plan or individual education plan (IEP) might be a better choice. Though not as stringent or as legally binding as a 504 plan, these plans outline what to do in case of emergency and provide the school staff with all of the appropriate emergency phone numbers. Parents should consider the severity of their child’s condition and the accommodations needed before deciding if a legal document like a 504 plan is the best way to ensure their child’s participation in school. Rousseau-Purdy adds that the most important thing is that school staff members know what to do in an emergency. “They don’t want to see your child hurt, and they are not doctors,” she says. “Not knowing what to do in an emergency is the worst situation for anybody.”

In addition to consulting with a member of your child’s hemophilia treatment center (HTC) team, the school nurse is often a good person to start asking about an IEP or 504 plan. The nurse may be able to ensure that the school staff knows what’s necessary—and not necessary—to prevent and address health-related issues. She can also educate the school staff on bleeding disorders by clarifying concerns and debunking myths. Currently, about 75% of schools in the US have a part-time or full-time school nurse, according to the National Association of School Nurses (NASN). However, recent cuts in government spending could jeopardize them. 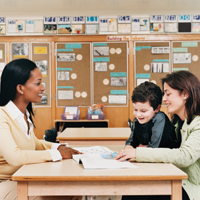 The school nurse can serve as a bridge between the school, the child’s physician or HTC staff, and the family. However, ­contact with the school nurse should begin before the first day of school. “If the school nurse can translate what the parent is saying about the child’s needs and what that means for the child’s education, then she can make sure that barriers are removed,” says Linda Davis-Alldritt, MA, RN, president of NASN. This may include explaining to teachers how certain medications can affect the child’s performance in class or how to ensure that missed school days are made up. The school nurse also keeps tabs on additional resources available in the school district, from transportation for treatment and clinical referrals to financial assistance. Each of these provisions protects the child’s health without interruptions in academic progress.

Joanna Whitaker, 26, a stay-at-home mom from Pang­burn, Arkansas, didn’t know what a 504 plan was until the school nurse called her requesting a meeting to discuss her son, Weslee, 9, who has moderate hemophilia B. The school nurse had invited the principal, nursing assistant and Weslee’s main teacher to the meeting, where they hashed out everything from what to do about a bleed to which activities he should avoid, and even Weslee’s preferred brand of ice packs. The nurse then gave Joanna her cell phone number, and the two keep in touch throughout the school year. “They told me they would keep an eye out for him, and I know they will because they’ve heard from me what to do,” Whitaker says. The meeting has taken the guesswork out of how the school staff should respond to Weslee’s needs.

Putting the Plan in Place

When Rousseau-Purdy is reviewing 504 plans or drafting them for her sons, the first thing she includes is a description of the bleeding disorder. She also recommends describing target areas where bleeds recur. When Rousseau-Purdy’s older son, now in college, was younger, his target joint was his left ankle. “So I told them, ‘if you notice him limping, give me a call,’ ” she says.
The plan should also outline which accommodations should be made to prevent or address bleeds, such as a private space for infusions, time off from school with in-home tutoring or having certain medications on hand. How to manage shunts and peripherally inserted central catheters should also be addressed early in the plan.

Another important subject to include in a 504 plan is the child’s physical activities. For example, Weslee’s 504 plan states that he can participate in recess, but not in tackle football. Rousseau-Purdy sought legal action against her oldest son’s high school after he was barred not only from extracurricular sports, but also from regular gym class. Specific sports were not mentioned in the 504 plan, but he had played baseball, flag football and basketball since elementary school with written permission from his physician. “I told them that you can’t prevent my child from participating because you think he might get hurt,” she recalls. At the school’s request,  Rousseau-Purdy filed court documents absolving them of any liability for injuries as a result of her son’s participation. “It’s a good example of a school that was so fearful, it didn’t matter how much info or how many doctors’ notes I had.”

The 504 plan helps prevent turning that type of fear into discrimination and exclusion. It also gives parents peace of mind that their children will receive the proper care while in school. This is why the next step is so important—the school meeting. Ideally, each of the child’s main teachers should be present at this meeting, along with his or her gym teachers, team coaches, school nurse and principal. The meeting provides a vital opportunity to review the draft of the 504 plan, make any necessary revisions and ensure that everyone understands your child’s health condition and instructions. The plan should be reviewed, and revised if necessary with an annual meeting to prevent it from expiring.

In Kim’s case, the patient advocate from the HTC drafted the plan and led the meeting. For Joanna, it was the school nurse. But eventually, the final say on the plan and the leader of the meeting should be the child, recommends Rousseau-Purdy. Once her sons entered middle school, she brought them to the annual meeting. When one teacher recommended that her younger son have a locker on each floor so he wouldn’t have to carry books up and down the stairs, he immediately objected. “I wanted him to make it his meeting, and not let us make arrangements that he was not OK with because of our fears,” Rousseau-Purdy says.

Living with a bleeding disorder nearly guarantees that similar conversations will happen with college professors, future employers, romantic partners and other people who might have concerns. The kids have to lead this process. “They need to know their strengths and weaknesses, and give their opinion about what they need and are comfortable with,” says Rousseau-Purdy. “I told my sons, ‘Get used to this process.’ ”