Avoiding trips to the emergency room with your toddler is an unspoken goal for every parent, but especially for parents of children with hemophilia and bleeding disorders. But how do you protect your child from the potential for injury that comes with the territory when your child is learning to walk?

As the parent of a child with a bleeding disorder, one must consider the value of preventing injuries versus allowing exploration. Additionally, parents have to weigh the pros and cons of making young children wear protective clothing or a helmet, which may look awkward but provides a measure of protection.

Ann Pleshette Murphy, parenting contributor for ABC TV’s Good Morning America and the author of numerous books on children’s health and development, says it is indeed a “very tricky line” for parents to toe when children’s natural tendencies are to get into trouble when they’re newly mobile. “On balance, it’s much healthier for them psychologically to be able to interact with their environment the way all toddlers need for their growth. They’re hard-wired to get into things they shouldn’t and run before they’re completely balanced,” says Murphy. “So they are going to fall down and potentially get bruised.”

Murphy believes that anything parents can do to protect a child with a bleeding disorder from typical bumps and lumps is important. But at the same time, parents will not want to hamper the child’s growth by being so protective that the child ends up fearful, frustrated or angry. “Protective gear enables the child to explore his environment and play and have fun,” Murphy says. “That outweighs what may be perceived as stigmatizing the child with a helmet or making him look funny with padded clothing. I would so much rather risk that my child be stared at occasionally than to have to spend a minute in the ER.”

The severity of a child’s hemophilia should factor into a parent’s decision about whether protective equipment is necessary.

Most toddlers who get hurt and require a trip to the ER have fallen off a bed or have run into a coffee table, says James Huang, MD, director of pediatric hematology and of the pediatric hemophilia treatment center at the University of California at San Francisco Children’s Hospital. “The head is the part that we’re most concerned about,” says Huang. “The head is bigger and heavier and that’s generally where kids hit when they fall. That’s not to say that toddlers cannot have joint bleeds, as well, so we’re obviously concerned, too, about elbows, ankles, knees and legs in little kids.” He warns that parents should watch their child’s gait for signs of discomfort if they suspect a joint bleed. And they should watch for symptoms of a head bleed, such as repeated vomiting, irritability, drowsiness, headache and confusion.

Huang believes that parents cannot protect their child 100% of the time, but he points out some common-sense methods that can be used to minimize the chance of potentially dangerous accidents and head-on collisions. He recommends parental vigilance in arranging household furniture and padding sharp table edges, getting all floors carpeted or taping down rugs on hardwood or tile floors.

Helmets are encouraged for toddlers as they venture out into the world on two feet. Huang says he recommends them to parents all the time. “Kids generally like the helmets even if they cannot wear them all of their waking hours.”

Parents of children with hemophilia and other bleeding disorders can be very creative in the face of necessity­. Leah Brundage, the mother of a child with a rare bleeding disorder, says she feared her son, Mitchell, would hurt his head and suffer a brain bleed. She was given an “institutional helmet” around the time he began to crawl, but it was so imposing, it made her cry. “It was so big,” she remembers, “it was just too huge to put on his head, so I made him one out of thick cotton batting.” 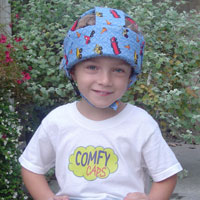 Brundage then perfected her ­creation with high-performance ­medical-grade foam and started ­marketing it. Endorsed by the Hemophilia Treatment Center of Western New York, the helmets are now sold online. “The whole purpose of Comfy Caps is to take the stigma out of a helmet,” says Brundage. They sell for about $75 and come in various fabrics.

Jennifer Mermilliod, board member of the Hemophilia Foundation of Southern California, says she started childproofing the family’s home when her son, Nathan, who has severe hemophilia B, was a newborn. The crib was the source of most of Nathan’s injuries, so she padded it with two-inch-thick foam her seamstress had sewed together for the inside.

The Mermilliods lined their hardwood floors with one-inch-thick blue interlocking foam play mats from Toys “R” Us that retail for about $20 each. “They’re great shock absorbers and easy to keep clean,” she says.

Jennifer then sewed pads to the inside of her son’s sleepers, attached tripled fabric pads into every pair of pants and added gardening kneepads to the outside of the pants.

Another parent turned bruise protection into a business that helps kids throughout and beyond the bleeding disorders community. Kathryn Ames of Denver was concerned about the bruises on son Nicholas’s knees when he crawled.

Ames launched Bruzwear, a line of padded-knee trousers that retail for about $44 and give parents a source of protective clothing for their children, rather than having to jerry-rig something themselves. “I realized all kids could benefit from padded knees, not just kids with hemophilia,” Ames says.

Huang says the process of protecting your child from harm becomes easier with experience. “I would ­prefer that parents are overly protective at the beginning and learn to see what is normal rather than be too cavalier.”

The following are some basic tips for parents of newborns and toddlers with hemophilia, von Willebrand disease or another bleeding disorder.