No cell phones, iPods, computers or TV for a week. Why would any kid in this digital age be willing to give up 21st century comforts for a cabin in the woods? One reason—the magic of camp. Summer camp entices children with bleeding disorders with the promise of trying new outdoor activities, the camaraderie of hanging out with other kids without having to explain their health condition and the attention of a caring community of counselors and staff.

Dropping Jay off at camp as a six-year-old was not easy, Luckey says. “He had a little bit of homesickness,” she admits. And her husband was somewhat nervous about it. But Luckey was adamant. She has an adult brother with hemophilia and knew how much camp had meant to him years ago.

“Jay loved it from the first year,” Luckey says, laughing. From archery to tie-dyeing t-shirts to learning corny camp songs, he is an eager participant. Last year Jay swam across the lake, accompanied by other campers and counselors.

Camp provides more than outdoor recreation for Jay. “He has become more independent by going to camp,” Luckey says. “He has learned more about his bleeding disorder. They encourage each other to take control of their lives and not let hemophilia control their life.”

This summer Luckey’s six-year-old twin daughters, Anya and Isabella, will go to camp. They have a platelet disorder and could be carriers. “Camp provides a good opportunity for them to learn about hemophilia,” she says, and make educated decisions later in life.

The majority of summer camps have a common goal—to provide children with bleeding disorders with a typical camp experience, where everybody is treated the same and where possibilities, not limitations, are stressed. But they differ in how they accomplish that goal. Some stress health education and advocacy, while others’ philosophy is “let kids be kids,” and do not broach the topics of infusion, self-sufficiency or weightier issues, such as preparing for a career and obtaining health insurance.

At Camp CoHoLo, which stands for Courage, Hope and Love, in eastern Nebraska, approximately 150 children with bleeding disorders or cancer congregate by age group: six- to 11-year-olds and 12- to 17-year-olds. During their four days at camp, they swim, create art projects, learn team building at the ropes course and gather at nightly campfires. But they do not have educational talks about their conditions or learn about self-treatment.

The camp’s mission is to provide a typical camping experience for kids who might otherwise not have a chance to go to camp. No treatment discussion or teaching. “It’s all about them being normal kids who get to have a normal, regular camping experience,” says Cindy Reilly, camp director. “They have the opportunity to live life to the fullest while they’re out there.”

At the Hole in the Wall Gang Camp in Ashford, Connecticut, children with a variety of disorders—bleeding disorders, cancer, HIV/AIDS and sickle cell anemia—and their siblings are encouraged to leave their worries and stress at the front gate. “We do not emphasize their health conditions,” says Matthew Cook, MSW, camp director. “We say, ‘Go and have fun at camp.’”

The camp was the inspiration of actor Paul Newman. When it opened in 1988 it was the first not-for-profit camp to offer a stand-alone facility for children with chronic, life-threatening health conditions. Now it is part of the worldwide Association of Hole in the Wall Camps and serves about 1,000 campers each summer.

The Hole in the Wall Gang Camp is fully equipped to handle the children’s various medical conditions. The infirmary is called the OK Corral, in keeping with the rustic Old West theme of the rest of the camp complex. It has five nurses and three physicians, and room for a helicopter to land in an emergency. 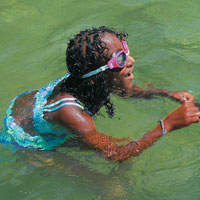 With the medical concerns taken care of, the camp feels it can focus on other things like building community, says Cook. “We normalize the experience of being a kid with a bleeding disorder.” With 40 peers who also have bleeding disorders, campers often make connections for the first time with other children they can talk to on the same level. “The kids can finally say, ‘It’s okay for me to be me entirely. Here I’m a part of something really big.’”

Other camps are founded on a different philosophy. They use the one-week window of time to push health education, self-sufficiency and advocacy, along with offering social activities. Most of these camps are run by NHF chapters, hemophilia treatment centers (HTCs) or other hemophilia associations. “Education is a very important component of bleeding disorders camp,” says Val Bias, co-director of Camp Hemotion in Coarsegold, California, near Yosemite National Park. The camp is sponsored by the Hemophilia Foundation of Northern California, an NHF chapter. “Knowledge about their bleeding disorders—which one they have, whether it’s mild, moderate or severe—is important information for them to have in terms of managing their lives. They need to understand it before they get to be teenagers and are looking at insurance issues.”

About five years ago, Michael Rosenthal, former executive director of the Hemophilia Association of Arizona (an NHF chapter), helped organize the North American Conference of Hemophilia Organizations (NACCHO). The conference, funded by a grant from Wyeth, was created to provide best practices and resources for camp personnel in a forum that encourages information and idea sharing.

One outcome of the conference was a set of health and safety guidelines, “Health Center Standards for Camps Serving Persons with Bleeding Disorders,” written by a committee of camp directors and healthcare professionals. It incorporates NHF’s 1993 publication, “Hemophilia Camp Program Standards” and the American Camp Association’s health center guidelines, and offers new “program enhancements” for camps that have the resources to meet higher standards. The guidelines were approved by NHF’s Medical and Scientific Advisory Council (MASAC) in April 2006. The basic health and safety standards are divided into four sections: site/facility; policies and documentation; program and education; and staffing.

The need for guidelines, according to Rosenthal, was to create common standards for camps across the country. “Summer camps are a big deal,” he says. “They are the single most important program that chapters run. You’re taking 100 children with a medical condition away from their parents for a week and you’re responsible for them 24 hours a day. There is a science to it.”

In the Program and Education section, the guidelines state that there should be at least 30 minutes of health education on such topics as the child’s diagnosis and treatment of bleeds. Further, they state that “self-infusion should be offered to all eligible campers” who have permission from a parent or guardian.

Camps celebrate campers’ successful self-infusion as a road marker on their journey to independence and self-care. “We reward the child with the Big Stick Award at mealtime in front of all the other campers,” says Bias. “It’s almost like a graduation ceremony.”

“I remember thinking, ‘This is going to be the year I’m going to do it,’” says Adam Wilmers, a senior at the University of Michigan in Ann Arbor and a counselor at Camp Bold Eagle.

“It was a very supportive environment for that,” says Wilmers. “My nurse from my HTC taught me. At eight, I got my Butterfly Award for successful infusion at the evening campfire. Now we have a ceremony at night with torches and a song. It’s like Hollywood.”

What to Look For in a Camp

When choosing a summer camp, Rosenthal encourages parents to look for the following:

Although campers come home with a whole new set of physical skills, they also gain personal skills. “Camp is about building citizenship, character and leadership,” says Bias. Children learn how to share, cooperate in a group and differentiate between right and wrong.

Being able to articulate what their bleeding disorder is constitutes a developmental milestone for the children. “Being able to say that is a huge character builder in terms of their ability to function in society,” Bias says. “Once you’re sure who you are, you can go on to lead others.”

Campers, counselors, directors and parents alike mention that camp has a way of changing children. As they make a new set of friends, campers gain self-esteem and learn how to lead.

“The leadership skills have translated to my college career,” says Wilmers. He is a resident adviser in his dorm and is student teaching at a middle school.

But it’s the people who made the lasting impression. “When you’re having a bad day and you’re on the fourth poke and you’re late for school and everybody is stressed out, you think about summer camp and you remember that there are other people in your situation,” says Wilmers. “A piece of it stays with you no matter what you’re doing. It’s a community.”