Raising a Child with Hemophilia: A Practical Guide for Parents

In 1987, when Laureen Kelley’s first child was born, she was in for a shock. Hours after delivering her son, a doctor came into her hospital room and told her that the baby bled so much when he was circumcised that doctors had to stitch the wound. Kelley’s family had no history of hemophilia, but her son was diagnosed with the bleeding disorder not long after this incident.

Recently married, having just finished graduate school and starting a new career as an economist, Kelley had no idea what effect a bleeding disorder would have on her family’s life. She felt overwhelmed. 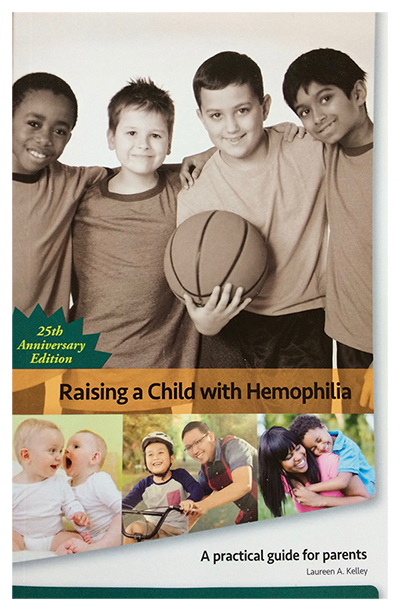 At a parents’ support group meeting, a nurse suggested that Kelley write down her feelings as a way to manage them. She did just that. She also started recording all the lessons she was learning about parenting a child with a bleeding disorder. From talking with other parents, Kelley soon realized moms and dads were full of practical advice and wisdom, yet there was no central place for them to share their hard-won knowledge. An idea was born: “I was hungry for information and wanted to sink my teeth into a book, like a Dr. Spock book on child raising, only for hemophilia,” Kelley wrote.

So she got to work. In those pre-internet days, she took out an ad in a homecare magazine asking parents to share their stories, eventually receiving 125 submissions. She crafted these into a book, which she worked on at night following a full workday and after putting her son to bed.

In 1991, Raising a Child with Hemophilia: A Practical Guide for Parents was published. The first edition was printed and distributed for free by Armour Pharmaceutical. The first of its kind, the book quickly became the parenting “bible” for a generation of families.

Through subsequent editions, Kelley expanded and updated the book to reflect new developments in the bleeding disorders community. In easily understood language, Raising a Child with Hemophilia covers such topics as medical treatment, genetic transmission, child development, consumer issues, school and sports. The fifth edition, published at the end of 2016, includes stories and advice culled from interviews with more than 180 families.

Just as it was when it was first published, Raising a Child with Hemophilia is offered free to families, now thanks to a grant from biotherapeutics company CSL Behring. Upon the 25th anniversary edition’s publication, CSL Behring’s CEO and managing director, Paul Perreault, wrote: “In this fifth edition, Raising a Child with Hemophilia has never been more relevant, especially in today’s complex healthcare environment. Through her writing, Laurie has initiated a new genre: Parents of children with hemophilia now have a voice, they are empowered and they are actively engaged on important topics with caregivers, policy-makers and other stakeholders. Her book continues to serve as a unique, stellar reference for hemophilia patients and their families.”

No doubt Raising a Child with Hemophilia will be an invaluable and treasured resource for generations of families to come.

To order Raising a Child with Hemophilia, go to kelleycom.com/books.html