Six-pack abs and ripped biceps may look sexy, but in the real world, they are not very realistic. Further, they are not a true measure of fitness for regular folks who don’t have hours a day to spend in the gym. Instead, being fit means you can lift groceries or your grandkids without throwing out your back. It means you can climb a flight of stairs without gasping for breath. It means you have the stamina to meet the physical demands of daily life. Real fitness, in other words, is functional fitness.

“Functional fitness means anything that helps with what we call ADL—activities of daily living,” says Cindy Bailey, PT, DPT, OCS, SCS, director of the physical therapy program at the Hemophilia Treatment Center at Orthopaedic Hospital of Los Angeles. This is particularly important for people with bleeding disorders, because even routine physical stresses can cause bleeds and other complications, especially in joints and muscles weakened by lack of exercise.

The goal of functional fitness is to develop greater strength, balance, coordination and endurance through exercises that mimic everyday activities. At the gym, most weight machines work individual muscles, such as biceps, triceps and quads. These exercises, say advocates of functional fitness, have little real-world application.

“Instead of just working on your triceps, you work on reality,” Bailey says. By that, she means exercises that train different muscle groups to work together safely and efficiently. For example, if your job requires you to stock shelves throughout the day, all that lifting can strain your body.

“In a case like this, we would design an exercise that imitates stocking shelves, starting with five-pound weights that you lift and place at waist, chest, shoulder and head level,” Bailey says. This exercise not only reduces strain, but also makes the job easier.

Other examples of functional fitness are squatting and lifting. Most people do them several times a day when they do the laundry, carry shopping bags or clean up after their kids. The exercise involves bending at the knees until in a near-sitting position while holding a small dumbbell and then standing up straight. Practicing the proper form will help you avoid injuries during your daily routine.

Functional fitness developed as an aid to rehabilitation for patients recovering from an injury or surgery. During the past several years, though, it has become more popular. In fact, the American College of Sports Medicine (ACSM) ranked functional fitness among the top 10 in three of its past four annual fitness trend surveys. (In 2009, it was number 11.)

The first thing Bailey focuses on with new patients is developing their core muscles, which include abdominals, lower back, hips and pelvis. The goal is to build not only strength, but balance and stability as well.

Bailey and physical therapist Stacie Akins, PT, are both strong supporters of swimming. “If you have access to a pool, use it,” says Akins, of the Indiana Hemophilia & Thrombosis Center in Indianapolis. “It’s a whole-body workout without stress.” Akins also recommends one of the most basic examples of functional fitness: walking. Most people walk every day, and it’s a great way to build cardio fitness and burn calories, she says. But Akins also recognizes that not everyone can walk comfortably. 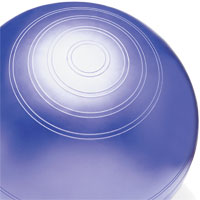 “For someone with severe arthropathy, walking from the car to the store can feel like walking a mile,” she says. She stresses that any exercise regimen has to be individually tailored to a person’s needs and abilities. “Before starting patients on any new exercise, I want to see where their baseline is, what they can and cannot do, what joints are giving them problems. Then I start them on a low-key program.”

Whatever that program involves—a pool, an elliptical trainer, a good pair of walking shoes—the secret is to keep at it. “Physical activity protects your joints,” Akins says. “Get up and move.”

That’s a lesson that Patrick Tomlinson, 22, has learned well. An advocate of functional fitness, he gets most of his exercise on a bicycle. (See “Road Trip,” HemAware September/October 2008, p. 80.) Tomlinson prefers to ride outdoors, but when the weather in his hometown of Marysville, Michigan, is not cooperating, he rides a stationary bike at home. Tomlinson, who has moderate hemophilia A, also spends time at the gym.

“I don’t go to the gym to get gigantic,” Tomlinson says. “I go there to do something useful, like lifting free weights that engage more muscles than the weight machines do. Being in shape means I don’t tire easily, that I have more stamina, that I can make it to the top of the stairs more easily than other people.”

In other words, it means he is fit for the demands of everyday life.