About 13 years ago, Mark Spalding competed in his first triathlon, a race that combines running, biking and swimming. Since then, he has participated in about 40 more. But he’s had to tailor his training and competing to accommodate his severe hemophilia B by not overworking his joints or risking a bleed.

“I have to be really careful about the intensity at which I train,” says Spalding, a psychotherapist who lives in Syracuse, Utah. “I need time to rebuild what I’ve worn down.”

During an Olympic-length triathlon, athletes swim nearly a mile, bike for 25 miles and then run 6.2 miles. Spalding, 38, has competed in Ironman and Half Ironman races, triathlon events that are, respectively, four times and two times the length of an Olympic triathlon. “If you’re smart and cautious about your training, it can be done as a bleeder,” says Spalding.

However, a shorter race, such as the “super sprint,” may be for you. It’s about a quarter the distance of the standard triathlon. “Look for the shortest distance you can find to get introduced to the sport,” advises Vaughn Ripley, 45, a vice president at Emergent, an IT reseller and consulting firm in northern Virginia. Ripley, who lives in Brunswick, Maryland, has mild to moderate hemophilia A. He has raced in two sprint triathlons, which are about half the distance of the Olympic event. Triathlon training, which for him includes yoga and weight training, has had a positive impact. “I’ve found that my exercise and stretching routine has actually limited the number of bleeds I have,” Ripley says.

Heidi Lane, PT, DPT, PCS, of the Intermountain Hemophilia and Thrombosis Center in Salt Lake City, Utah, doesn’t encourage triathlon training for her patients because of the risk of overuse injuries during training and races. “Triathlons are typically run on cement, which is harder on the joints,” says Lane. “Your body will need to be able to tolerate that.” 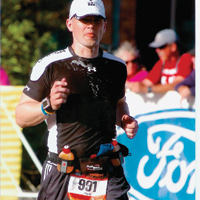 Although biking is easier on your joints, crashes or collisions can occur. Despite taking precautions, Spalding fell off his bike last year and had thumb surgery. Even swimming, considered a safe sport for people with bleeding disorders, has risks. “The concern with swimming is overuse and incorrect technique,” Lane says. Both elements of the triathlon can put undue strain on your joints. Lane strongly advises hiring a coach. “It’s worth the investment to meet with experts who can help with technique,” she says. But first, visit your physical therapist (PT).

Your PT and a coach can help design a proper workout routine based on your current fitness level and time to prepare for the event, Lane says. A coach can explain which equipment you’ll need for each leg of the race. Your training regimen, which builds stamina while minimizing overuse injury risk, will be unique. But Lane offers a few universal tips. First, go slowly. Increase the distance for each component by no more than 10% weekly. Regularly discuss your progress with your PT, being honest about how much you are training and how you feel. And get plenty of rest.

Spalding agrees: “I go hard for one to one-and-a-half weeks, then take it easy,” he says. Ripley’s rest routine includes elevating his knees after a run and icing them.

Finally, it is crucial that you talk to your physician about treating before you begin to train. Establishing an infusion routine—and a game plan in case of injury—should be top priority. “You need to have a treatment plan during training and on race days,” Lane says.

Proper nutrition and hydration should also be discussed with your physician, says Lane. Water is ­essential. The amount you should drink depends on the intensity of your workout, your own body’s needs and other factors. Also, find out what fluids replace electrolytes lost through sweating. Consult a health professional about the amount that’s right for you and how you can best replace the fluids, electrolytes and other bodily essentials that you lose through sweat, says Lane.

That is vitally important if you have von Willebrand disease and are taking desmopressin (Stimate® or DDAVP), because drinking too much water may cause you to lose sodium. This condition, called hyponatremia, can be very dangerous. Again, Lane says, you must talk to your doctor to determine how best to stay hydrated.

Ripley and Spalding find satisfaction in training for and competing in triathlons. “At the end of a race, I feel like I’ve accomplished something incredible,” Ripley says. “I know that I pushed myself harder than I thought I could, and I was rewarded by the finish line.”