Susan Willats, 55, grew up seeing her older brother struggle with severe hemophilia A. “It was before home treatment,” says the Santa Cruz, California, resident, who is a hemophilia carrier. “I spent hours in the hospital every time he needed treatment. Between healthcare costs, the impact on family activities and the time spent obtaining treatment, hemophilia had a huge effect on my family,” she says. While planning to have her own child when she was in her 30s, Willats remembered these experiences and took steps to prepare.

A pregnant woman who is a hemophilia carrier has special concerns. For example, her child could be born with hemophilia, so she should know how to manage it. She could give birth to a daughter who is a carrier. Female carriers may also face bleeding complications, especially after delivery. For these and other reasons, some women may choose to avoid pregnancy or adopt. Still others may terminate a pregnancy if the fetus has hemophilia. For women who do carry the child to term, they must plan for their own safety and their baby’s.

Women who are—or could possibly be—carriers should have two tests, ideally before conceiving, says Marion Koerper, MD, medical advisor for the National Hemophilia Foundation. She is former director of the University of California, San Francisco’s Hemophilia Treatment Center (HTC). “She needs to be tested to determine that she is a carrier, and DNA testing to find the exact mutation,” Koerper explains. “If she is found to be a carrier, her factor level should be tested before she gets pregnant to find out if she actually has mild hemophilia.”

Testing prior to pregnancy helps establish a baseline measurement of the woman’s factor level. Unlike factor IX levels, which remain stable during pregnancy, factor VIII levels can increase, making it difficult to diagnose carrier status at that time. If DNA testing isn’t done before pregnancy, it should be done at an HTC as soon as possible after a woman becomes pregnant, Koerper says. HTC staff are better equipped to interpret test results and help women prepare.

Women with factor levels above 50% don’t usually need special care, says Koerper. However, levels below 50% necessitate that women be monitored for bleeding complications, with the provision for a plan to receive factor replacement during delivery if needed. 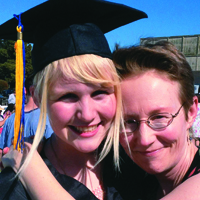 Susan Willats with her daughter
at her high school graduation.

Genetic testing is not just for pregnant mothers. A woman should consider testing her fetus for hemophilia, because that type of delivery requires additional care. “Currently, the earliest possible approach would be to obtain a placental biopsy by chorionic villus sampling (CVS) at 10 to 13 weeks’ gestation,” says Anthony R. Gregg, MD, FACOG, FACMG, a geneticist and chief in the Department of Obstetrics and Gynecology at the University of Florida College of Medicine in Gainesville.

CVS involves extracting fetal cells that can be analyzed for gender and, if a male, for hemophilia if a carrier’s mutation is known. Amniocentesis, the extraction of cells in amniotic fluid, is an option after 15 weeks of pregnancy. Both tests carry a low risk of miscarriage. Women should consult with an obstetrician who is experienced with women with bleeding disorders. Those with low factor levels may need factor replacement after the procedures.
Willats first had CVS in the early 1990s. When she was 11 weeks pregnant, she learned she was carrying a boy. She and her husband had to wait another seven weeks for lab results. The waiting was difficult. “I knew that if the fetus had hemophilia, I was going to terminate,” Willats recalls. The testing did show hemophilia. “Choosing to terminate a pregnancy is so very personal. It’s very complicated,” she explains. In 1994, Willats gave birth to a daughter who is not a carrier.

Another option is preimplantation genetic diagnosis (PGD). This method incorporates in vitro fertilization and DNA testing outside of the womb, giving doctors the information they need to  implant embryos without hemophilia. “It is a very interesting concept,” says Koerper. However, PGD is expensive, with costs potentially starting at $10,000 to $15,000. Further, PGD may not be covered by insurance and is not widely available. 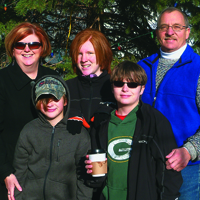 Regardless of conception method, couples should meet with a genetic counselor to discuss reproductive options. That’s what Barb Dittrich did. The aunt of two boys with hemophilia, she knew it was a possibility for her child. She was also aware that her husband Steve could have been a carrier for cystic fibrosis (CF). “We really wanted to be parents,” says the director of Snappin’ Ministries, an organization for families with special needs children, in Oconomowoc, Wisconsin. “We would rather have risked having a child with hemophilia than have no child at all.” But a child with CF and hemophilia would have had severe complications. When Steve was found not to be a CF carrier, the couple pursued parenthood.

The Dittrich’s first child, a daughter, is a carrier. Their second, a son, has severe hemophilia A, which they learned shortly after his birth. Though he spent time in the neonatal intensive care unit at first, today he is a happy 13-year-old. “There have been hard times and good times,” Dittrich says, now the mother of three (her third child, a daughter, is a carrier). “But I can’t imagine life without him.”

Planning for a Safe Delivery

“Any pregnant woman can have bleeding,” says Koerper. Placental abruptions are one cause of bleeding during pregnancy. “It occurs when the placenta separates from the uterus.” If this type of bleeding occurs in women with low factor levels, they can risk miscarriage. It’s important for them to contact HTC staff immediately if symptoms of this condition develop.

Women with low factor levels can also experience excessive bleeding during vaginal delivery or after a Cesarean section, and may need factor replacement. Ideally, such at-risk women should give birth in a hospital that has the appropriate laboratory, pharmacy and blood bank support.

Fetal scalp electrodes, forceps and vacuum-assisted vaginal deliveries should not be used in women expecting boys, says Gregg. That’s because babies with hemophilia are at increased risk for head bleeding, which can affect the scalp or the brain, according to the Centers for Disease Control and Prevention (CDC). Like Gregg, some obstetricians may avoid assisted vaginal deliveries for a baby of any gender when a mother is a confirmed carrier.

Finally, no matter a baby’s genetic status, new parents now have access to excellent healthcare. “There are health professionals in hematology, maternal-fetal medicine and genetics who are generally available and can guide women through a safe pregnancy and delivery,” says Gregg.