The National Hemophilia Foundation’s (NHF’s) Annual Meeting in November 2010 was our first NHF meeting. We were all excited to go to the meeting and to visit New Orleans. There were several reasons we decided to make this our first meeting. First, two of the four of us have von Willebrand disease (VWD)—wife/mother Julie and son Chad, age 11. There were several VWD sessions we hoped would have good information.

Second, we knew NHF would have news and updates on all the changes in healthcare recently. Third, we have attended the Arizona Hemophilia Association’s annual meeting for years, and we wanted to share our experiences with our local chapter. And, finally, let’s face it: Part of any conference is the destination. None of us had been to New Orleans, and this was a great opportunity to see the city.

Our family friends who have been going to NHF Annual Meetings for years gave us three pieces of information: First, expect to wake up early, stay up late and be utterly exhausted by the time the conference was over. Second, bring a spare bag, because you will leave with so much stuff, you’ll need the extra space. And third, expect to have a great time. All three bits of advice were exactly as our friends said. So, for future conferences, we know now to pack extra bags and to try to get some more sleep the night before we leave.

Before we left for the meeting, our friends in the bleeding disorders community came over for pizza. While we chowed down, we formed a plan, deciding who should attend which sessions, who should be responsible for the kids and what we should do with our free time. By pre-planning and splitting up, we knew we could attend more sessions and get more information. We wouldn’t be wasting any time (“What do you think we should do now?” “I don’t know; what do you think we should do?”). Pre-planning worked well for us, and I feel we got as much out of the meeting as possible. Yet, we still had time to enjoy ourselves. 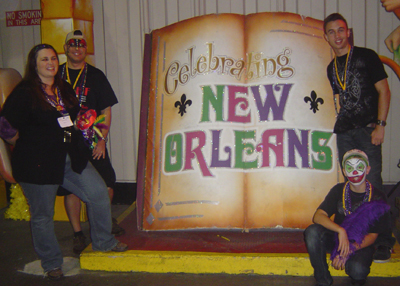 We arrived at the Annual Meeting a day early. This gave us a chance to experience New Orleans. We had a great time walking around, seeing the sites and eating the food. And the people of New Orleans were very friendly. So, “good job” goes to NHF for picking a good city for the meeting.

On Thursday, we parents attended different sessions before the Opening Session began. This worked well, and we spent most of the rest of the meeting in separate sessions. Thursday night was great. We spent all evening in the Exhibit Hall, which was large, noisy and full of things to do. Each vendor had an elaborate booth, some with games, raffles and food. There was a ton of information handed out by everyone. We picked up so much paperwork, information and goodies from vendors that we had to make a trip to our hotel room to unload. The vendors were extremely friendly and eager to talk.

Friday we had breakfast sponsored by one of the vendors, and then we checked the kids into the kids’ program. They went to the aquarium and a movie, while the adults attended sessions. We learned so much and met so many people that it was a little overwhelming at times, but in a good way.

There were many good speakers, making the various topics interesting. We feel we got the most out of the blood updates sessions, specifically about concerns over plasma. We also learned a lot from the dental sessions.

After the sessions, vendors sponsored various events. We attended a great family-friendly party sponsored by CSL Behring. We met even more people we hope to stay in contact with.

Saturday came too early. Again, another good breakfast, kids off to their program, then splitting tour time between various sessions, with a lot more good information. The majority of the sessions ended around 3 p.m., when the Awards Luncheon began. Some people attended one or two more sessions after the awards. Because we had an early flight the next day, we took the time to pack what we could before the Final Night Event began. The party, sponsored by Baxter, was another family-friendly event with plenty of food and fun for everyone.

Just like Saturday, Sunday came way too early. We packed, said our goodbyes and headed home. Overall the Annual Meeting was a great experience. It was a mix of good information, great people and good times for kids and adults. As parents, it’s wonderful to know your kids had a good time and that you didn’t need to worry about them.

Thanks, NHF, for a great meeting. Thanks to all the vendors for the information and the events. Thanks to the Louisiana Hemophilia Foundation for being great a host. And thanks to the Arizona Hemophilia Association for having so many people from our chapter there—it’s always nice to see familiar faces.