For women with bleeding disorders (including carriers), pregnancy can be a time of heightened worry and confusion. In this issue of HemAware, we conducted e-mail interviews of two experts in the field and members of the National Hemophilia Foundation’s Medical and Scientific Advisory Council: Andra James, MD, co-director of Duke University’s Comprehensive Thrombosis and Hemostasis Center, and Amy Shapiro, MD, director of the Indiana Hemophilia and Thrombosis Center. We discussed some of the issues that most concern pregnant women with bleeding disorders.

[Steps for Living: Family Planning: The Next Generation]

All women with a known diagnosis should have contact with their hemophilia treatment center (HTC) during pregnancy to ensure coordinated prenatal and postpartum care.

Are there any blood products or medications taken during pregnancy that might pose a risk to the baby’s health?

Dr. Andra James: von Willebrand factor concentrates are derived from purified human plasma and carry the risk of virus transmission. While a small risk of virus transmission exists, no transmission of human immunodeficiency virus (HIV), hepatitis B or hepatitis C has occurred with any von Willebrand factor concentrates currently marketed in the United States. Parvovirus B19, however, is very difficult to eradicate despite the purification process. Parvovirus B19 can cause a mild disease (fever, rash, aches and pains) in adults, but can cause severe, life-threatening anemia in unborn babies. There is a risk that this virus could be transmitted with purified factor products and potentially harm an unborn baby. There are, however, no reports of this actually happening.

Blood products such as fresh ­frozen plasma and cryoprecipitate are tested for known viruses, but are not purified, and may allow unknown, but potentially harmful viruses to be transmitted.

DDAVP, a synthetic version of the hormone vasopressin, if required prior to a procedure, is generally thought to be safe for mother and fetus. Tranexamic acid (Cyklokapron) crosses the placenta, but has been used to treat bleeding during pregnancy in a limited number of cases without adverse fetal effects. There are limited data about aminocaproic acid (Amicar) in pregnancy, but it was not found to cause birth defects in rabbits. In one case of its use during pregnancy, there were no adverse fetal effects.

Dr. Amy Shapiro: Since the data are so limited, Amicar should only be used in circumstances in which it is thought essential, and any issues should be reported to widen our knowledge base.

Women with von Willebrand disease (VWD) have a tenfold greater risk of antipartum bleeding (bleeding during pregnancy). What can be done to decrease this risk?

Dr. Shapiro: We usually ask patients to maintain careful observation and provide us with early notification of bleeding. In cases where there have been previous problems, or in specific types of VWD, some form of treatment may be considered.

Dr. Shapiro: The inheritance of bleeding disorders depends on the specific disorder with which the woman is affected. Based upon the specific diagnosis and the mode of inheritance, the risk to the fetus can be predicted. These issues are best addressed by a knowledgeable genetic counselor (associated with some HTCs or hospitals).

Are there any concerns about using epidural anesthesia?

Dr. James: An epidural anesthetic provides pain relief during labor. To administer this medication, a catheter (thin tube) is placed into the epidural space, which is just outside of the dura, or wrapping, around the spinal cord; repeated or continuous doses of a local anesthetic or narcotic pain reliever are then delivered through this catheter. In contrast, a spinal anesthetic provides anesthesia for cesarean delivery. Its administration involves a single injection of a local anesthetic into the spinal fluid, which is located beneath the dura and surrounds the spinal cord. Because bleeding in the epidural space or spinal fluid could compress the spine and cause paralysis, anesthesiologists usually refrain from giving a patient with a bleeding disorder an epidural or spinal anesthetic unless her factor levels are continuously higher than 50 IU/dL. If a woman needs pain relief while in labor and does not have levels that are continuously higher than 50 IU/dL, narcotic pain relievers can be used instead of an epidural. If she requires a cesarean delivery, a general anesthetic can be used instead of a spinal.

Is there a risk for head bleeds in newborns? Is that risk increased if the baby has certain factor deficiencies? What can be done to decrease this risk? 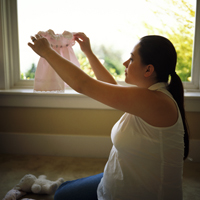 Dr. Shapiro: There is a risk with hemophilia A and B that is increased in infants who are born to women who are unaware of their carrier status, or when delivery requires use of instrumentation (like forceps) or vacuum extraction. There are specific disorders in which intracranial hemorrhage (head bleeds) risk is increased, but these disorders are ones in which the mother is not affected, such as factor XIII deficiency.

Women with VWD are five times more likely to have postpartum hemorrhage (excessive bleeding in the mother after delivery). How would a woman recognize her postpartum bleeding as abnormal? What can she  do to try to decrease the risks?

Dr. James: “Abnormal” bleeding is soaking through a pad in an hour and continuing for more than an hour. During pregnancy, a woman’s von Willebrand factor levels increase. Women with mild type 1 may achieve levels above 50 IU/dL, the lower limit of the normal range outside of pregnancy, and may be able to be safely managed by their obstetrician/gynecologist at their local hospital. Women with type 3 VWD, type 2 VWD, type 1 VWD with factor levels less than 50 IU/dL or a history of severe bleeding should be referred for prenatal care and delivery to a center where, in addition to access to specialists in high-risk obstetrics, there also is an HTC or a hematologist with expertise in VWD. Laboratory, pharmacy and blood bank support is essential. The most important thing women can do to try to decrease the risks of postpartum hemorrhage is to make sure they have the right doctors and the right hospital.

Most postpartum hemorrhage is caused by failure of the uterus to contract or tighten after delivery.

If a woman is being seen by a knowledgeable physician or hematologist, every effort will be made to assure that factor levels are sufficient to prevent bleeding from tears and incisions, and to prevent delayed postpartum hemorrhage.

If hemorrhage occurs, how should it be treated? Are there differences for the different types of VWD?

Dr. James: Factor levels should have been corrected before delivery, so the treatment of postpartum hemorrhage should be the same as for any woman with postpartum hemorrhage. The first response is stimulating the uterus to contract. The next response is the administration of additional medications to cause the uterus to contract. In some cases, emergency surgery may be necessary to scrape the uterus (curettage), physically compress the uterus or ligate (tie off) blood vessels. Hysterectomy is a last resort and is only necessary after one in 1,000 deliveries. In the case of massive hemorrhage, treatment with blood products may be necessary.

Ideally, planning for pregnancy begins before conception. Women contemplating a pregnancy should be aware that they may be at an increased risk of bleeding compli­cations. They should be aware of their own health status before getting ­pregnant. Prior to conception or during pregnancy, women may want to speak with a genetic counselor regarding the inheritance of VWD and with a pediatric hematologist regarding the evaluation of the infant after delivery. Because of the possible need for transfusion during delivery, women who have not already been vaccinated should be immunized against hepatitis A and hepatitis B.