Having von Willebrand disease (VWD) doesn’t hold Ray Pierce back. The 20-year-old junior at Catholic University of America in Washington, DC, swims freestyle sprint and breaststroke for his college swim team. Throughout his life, he has done gymnastics, played baseball (as third baseman and outfielder), run track and played basketball, and he continues with his favorite sport, karate.

VWD is a hereditary condition, caused by a defect or deficiency of the von Willebrand factor blood clotting protein. VWD occurs equally frequently in males and females. It is associated with recurrent nosebleeds and heavy periods in women, as well as gastro­intestinal traumatic and postoperative bleeding, according to Margaret Ragni, MD, MPH, director of the Hemophilia Center of Western Pennsylvania.

Pierce was diagnosed with type I VWD at three years old. Although symptoms are typically mild, he bleeds often. He enjoys being active, but having VWD makes Pierce think before he leaps into a new sport. Taking necessary precautions and listening to his body are the name of the game for him. To avoid injury, Pierce focuses on the sports he likes most and makes sure to train specifically for them by using protective gear and doing stretching and strengthening exercises.

Which Sports for You?

People with all types of bleeding disorders—even the most severe types of hemophilia—should get some form of exercise, experts agree.

For people with VWD, the health benefits of being in shape outweigh, in most cases, the risks of playing sports, says Ruth Ann Kirschman, WHNP, BSN, women’s health nurse practitioner at the Mountain States Regional Hemophilia and Thrombosis Center, University of Colorado, Aurora. “Muscles that are not in good shape cannot hold the joints in proper alignment and protect them.”

As active as Pierce has always been, he has not played organized football or hockey.

For people with VWD, these are among the sports that are considered particularly dangerous, says Sherry Herman-Hilker, PT, MS, University of Michigan Hemophilia and Coagulation Disorders Program, Ann Arbor.

“We don’t encourage high-contact sports because of the risk of abdominal or intracranial [within the cranium] bleeding,” Kirschman says. “But we do encourage weight control, and muscle training and fitness as a protection against bleeding. We love swimming. It’s an excellent sport [because it] works the opposing muscles adequately, so you get the best balance of muscle toning through swimming without the trauma to the joints that can cause joint bleeding in those with bleeding disorders.”

“The safe sports are those where the benefit of participating clearly outweighs the risks under all circumstances. In the dangerous sports, the risks outweigh the benefits in most circumstances,” Herman-Hilker says. 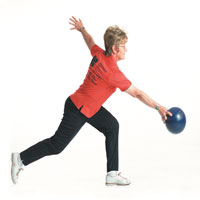 Other high-risk or dangerous sports include rugby, trampoline jumping and power lifting. Sports that are generally considered safer include archery, golf, hiking, tennis, rowing and bowling, according to the Playing It Safe: Bleeding Disorders, Sports and Exercise booklet published in 2005 by the National Hemophilia Foundation (NHF) and distributed by HANDI, NHF’s information resource center.

“Some sports, such as soccer, should be approached with caution, especially when the child begins to head the ball. Most would agree that competitive soccer in the teenage years is a contact sport,” Abshire says. “Other sports such as basketball or baseball, where contact with another person or object [ball or stick] may occur, are probably okay for type I VWD, due to the low likelihood of injury. In general, however, it is probably best to have children with VWD become involved with a sport where injury is unlikely, so that they can develop an ­interest and an expertise early in their school-age years.”

Before beginning a sport, people with VWD should talk with their hematologists and hemophilia treatment center (HTC) physical therapists, according to Angela Forsyth, PT, DPT, a physical therapist at the University of Pennsylvania Hemophilia and Thrombosis Program in Philadelphia.

There are three levels of VWD, from type I on the mild end of the spectrum to the more severe type III. Patients with a mild condition often have a broader range of sports options, but even they have to take into consideration their individual health concerns. When determining which sports might be best for individual patients, HTC physical therapists often ask VWD patients about their bleeding histories and what causes their bleeds. 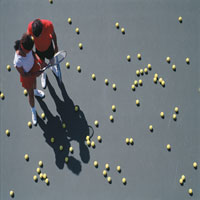 “If I have a patient with type III VWD who has recurrent left knee bleeds, then I am not going to recommend that he [aggravate the problem with] running or basketball,” Herman-Hilker says. “If he, on the other hand, has an elbow problem, then the exercise choices would be different.”

Once people get the OK from their hematologist or HTC and parents to participate in a sport, they should concentrate on preparing for it.

“Make sure you know appropriate stretching and warm-up activities before your first practice,” Herman-Hilker says. “I would also make sure that you are communicating with coaches, exercise instructors and others so that these folks understand your condition, the risks, and how to assist you if you should have a problem.”

For people who have more severe types of VWD, prophylaxis might be necessary to achieve necessary factor levels prior to higher-impact or higher-exertion sports. Girls and women with heavy menstrual flows sometimes find sports participation difficult. If this is a problem, Ragni recommends talking with your healthcare provider about additional treatments and options.

Pierce remembers trying to play through injuries when he was younger so that he wouldn’t have to miss practices and games. “But that’s the worst thing you can do. Luckily for me, none of that set me back. I definitely realized when I would get injured that it was in my best interest to take care of myself,” Pierce says.

Today, Pierce uses DDAVP (desmopressin acetate), a synthetic hormone in the form of a nasal spray, as a pretreatment before intense competitions or after injury. What people with VWD want to avoid is bleeding into the joint. Not only is it painful, but it can also be problematic.

“The long-term consequence is that the blood in the joint is very destructive to the joint itself,” says Herman-Hilker. “You can end up with long-term and permanent joint damage.”

Prompt treatment of injuries is important. Herman-Hilker recommends that people with VWD who have sports injuries use the RICE protocol (rest, ice, compression and elevation) and immediately contact their hematologist or HTC to determine if medical treatment is necessary.

Play for the Fun, Health of It

Excelling in sports makes people feel good about themselves and their bodies. Participating in sports builds self-assurance and self-reliance. It improves balance, muscle tone, sleep quality and posture, according to Ragni.

“It also contributes to healthy living  and reduces obesity, which can contribute to  poor health  outcomes,” she says.

Exercise and sports have special benefits for people with VWD.

According to Ragni, some women who engage in sports frequently might gain an additional benefit from the exercise—a reduction in heavy bleeding during their menstrual cycles.

Be Safe But Confident

Megan Procario, 21, a senior at the University of Pittsburgh who has type II VWD, says it’s easy to be fearful of sports participation.

“Once we found out that I had a bleeding disorder, my parents and I were kind of afraid to let me do sports,” Procario says.

She played some sports, including softball, during middle school and high school, but says she hesitated to give it her all. Now that she has greater understanding of the disorder, Procario thinks she would be in better shape today if she had participated more when she was younger.