As a child in Mumbai, India, Perseus Patel spent the first 10 years of his life in excruciating pain. Eventually he was confined to bed, with doctors predicting he might never walk again. When his family immigrated to northern California in 2001, he found a world of difference. But access to comprehensive treatment for his severe hemophilia A wasn’t the only improvement: He was thrilled to discover the American tradition of bleeding disorders camp.

“In India, I never even imagined a camp for people with hemophilia,” says Patel, now a second-year pre-med student at the University of California, Los Angeles. “Camp was the highlight of my summer.”

Now Patel is taking that experience back to his homeland. With logistical help from the Hemophilia Federation India, he established a camp in Pune, India, for kids with bleeding disorders. “I want to give back to them for what they gave to me for 10 years,” he says. The four-day overnight camp, which opened in 2008, combines physical therapy and education on self-infusion with hiking, swimming and other forms of fun. The camp can accommodate 30 campers this year, up from 20 in 2009.

The Indian version isn’t an exact replica of the American camp. “We don’t have s’mores and a campfire night,” Patel laughs. And unlike the American camps, where Patel says kids “run around from sunrise to sunset,” the Indian camp has a slower pace. “We can’t do that with these kids,” he says, noting that they lack access to adequate factor, just as he did as a child. “They don’t have the joint strength or flexibility,” Patel says. “A lot of them walk with limps.” But despite the differences, the goal is the same: fostering independence and a sense of community.

This camp in India is part of a larger effort to bring camp experiences to kids in other countries. The Global Health Society, a nonprofit organization that uses programs, education and advocacy to empower people with bleeding disorders, co-created camps for children in Mexico and Romania. The Hole in the Wall Camps serve children with serious illnesses, including bleeding disorders, in Ireland, France, the United Kingdom, Italy and Hungary. The World Federation of Hemophilia USA (WFH USA) is also joining the effort with a new program that takes American campers on a virtual journey around the world.

“It’s an exciting time for us to see that change happening in these countries,” says Christensen, who is also executive director of the Arizona Hemophilia Association in Phoenix. “If every single country could do a camp similar to what we do here in the States, the learning that would occur for these kids would be phenomenal.” 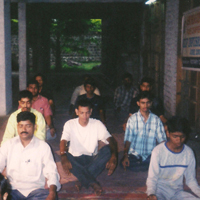 Campers during a yoga session at a bleeding disorders camp in Pune, India

The Global Health Society makes a five-year commitment to get camps up and running, then will move on to new locations. The society also provides technical assistance to organizers of other international camps.

The society’s three founders—all of whom have bleeding disorders—are products of summer camps in the US, says co-founder Bobby Wiseman. That experience taught them how important camp can be for children with bleeding disorders. It also persuaded them to put camps at the center of the society’s mission, says Wiseman, who started attending camp at age 5.

“Camp is one of the fundamental places where one can learn independence,” says Wiseman, who has hemophilia B. It also fosters a sense of community. “If you’re used to being the only one in a five- to 10-mile radius who has a bleeding disorder, then the only time you see someone else with a bleeding disorder is during a visit to the hemophilia treatment center,” he explains. Being at camp with other kids who have the same condition helps normalize the experience. “If you happen to be on crutches one day, it’s not an issue.”

Wiseman, who made two visits to the camp in Iasi, Romania, felt right at home. “Regardless of language or culture, there’s a bonding effect,” he says. The activities felt familiar, too: arts and crafts, pool time and medical education. The camp is now run by organizers in Romania, while the society works on expanding its camp in Villahermosa, Mexico.

The Global Health Society adapts its camps to accommodate local conditions and needs. “In the US, if someone tells you they’re going to summer camp, you automatically think there’s a pool or a lake,” says Wiseman. “These countries don’t have campsites like we’re used to, where you’re in cabins secluded from the main city.” Instead, the society’s camps take place at hotels with pools.

Parents’ attitudes are also different at international camps, says Wiseman. When the society launched the Romanian camp, for example, parents were extremely nervous. “They’re very protective because of the lack of access to product and care,” he explains. “To send your child away for seven days to a place where you know one or two of the people, there’s a fear factor.” Phone calls to anxious parents offer reassurance before camp starts, Wiseman says.

Since many campers lack access to daily comprehensive care, Vlaskamp focused on teaching basic physical therapy, such as strengthening exercises, wrapping joints with Ace bandages and using ice and elevation. (The camp provided enough factor to allow kids to be as active as they wanted to be, adds Vlaskamp.)

For Vlaskamp, who has type I von Willebrand disease, the most moving part of the experience was the transformation of one boy with an inhibitor. He used a wheelchair because his family was afraid to let him walk or try new things. “This little boy came to camp with the saddest face,” Vlaskamp recalls. “By the end of the week, he was nowhere near his wheelchair. He had the biggest smile plastered on his face.”

The Hole in the Wall Camps include kids with all kinds of serious medical conditions, including hemophilia, cancer, HIV and sickle cell anemia. At these camps, the emphasis is on fun rather than education. 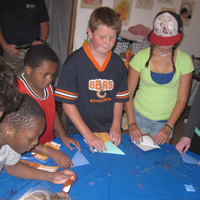 Kids at a US bleeding disorders camp “visit” and learn about a new country as part of the WFH USA Journey Around the World program.

Created in 1988 by actor Paul Newman, the first camp began in Connecticut, but the concept soon expanded to several states and countries. The newest international camp, the Jordan River Village in Ra’anana, Israel, will open early next year. “Mr. Newman wanted to see the model spread,” says James H. Canton, chief executive officer and executive director of the Hole in the Wall Gang Camp in Ashford, Conn. “The lessons that we have learned that have been successful at one camp have been translated to the other camps.”

One key approach used in all the camps is to let children make as many decisions as possible. “Many of our children haven’t had a chance to really express their autonomy,” Canton explains. “We make sure that whatever activities we offer, we’ve already taken into account the needs of their illness so that anything is possible.”

Communication at international camps can pose a challenge. “We serve children from 20 European countries,” says Terry Dignan, program director of the Barretstown camp in County Kildare, Ireland. “At a session in the summer, we could have up to eight languages.” The camp offers an interpreter program plus chaperones who travel with the children from their home countries.

Camps also accommodate other types of diversity, such as religious differences. Making sure the new Israeli camp accommodates the religious needs of its Jewish and Muslim campers will be a special focus, says Alicia Wettenstein, director of communications and camp services at the Association of Hole in the Wall Camps in New Haven, Conn. “The camp will make sure to have the right food and separate or join boys and girls when appropriate,” she explains.

Fundraising can also be more difficult for international camps. “Philanthropy is one of America’s greatest contributions,” Canton says. “That may be very new to other countries.” In response, many of the international camps have opened fundraising operations in the US to help support their programs.

A Journey Around the World

Other campers are now going international, virtually speaking. A new WFH USA project, Journey Around the World, introduces campers in the US and other countries to the reality of children with bleeding disorders in other parts of the world. WFH USA piloted the program at 30 camps primarily in the US, as well as one camp in Romania and one in Canada, in summer 2009. The program was funded by an educational grant from Pfizer. 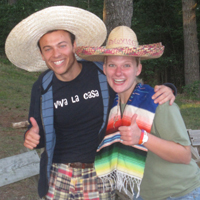 Campers received a boarding pass and passport, then traveled to stations representing Botswana, Peru, Mexico, France, Russia, Japan, Nepal and Egypt. At each country their passports were stamped and they participated in activities before moving on to the next country.

Each station was decorated to evoke the country represented. Children learned a little bit about the culture and participated in an activity typical of that country. In Japan, for instance, they did origami; in Peru, they played marbles, a popular game there.

The campers also learned what life is like in each country for children with bleeding disorders. “They saw what it’s like when there’s no treatment available,” says Mike Rosenthal, national director of WFH USA. He notes that globally, 75% of people with hemophilia go undiagnosed and untreated. “But it’s not all bad; there are countries like France and Japan where treatment is very good. They got a full picture.”

Once children return from their journey around the world, WFH USA hopes they’ll stay involved and spread the word. “All through these kids’ academic careers, they’re going to be asked to do projects and write essays and reports,” says Rosenthal. “Why not do it on hemophilia around the world? That way they will be creating awareness about bleeding disorders with their teachers, classmates and the parents looking over their shoulders.”