Around the world, hemophilia organizations strive to improve care in whatever way they can, whether by trying to increase diagnosis rates in their country or raising awareness about the disorder. In some countries, people with bleeding disorders do not have access to the level of care and services that exists in North America. Globally, 75 percent of people with severe hemophilia lack access to appropriate treatment. However, a lot can be done to make a difference.

The World Federation of Hemophilia’s (WFH’s) Twinning Program is an active example of the organization’s vision of Treatment for All. By linking emerging and established hemophilia organizations and treatment centers, the program has improved treatment and care for people with hemophilia around the world. Many US hemophilia treatment centers (HTCs) have been involved over the years, partnering with centers in other countries to share their expertise and make a difference on a global scale. (See “International Exchange,” HemAware September/October 2008, p. 58.) 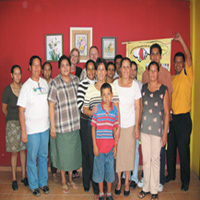 Hemophilia of Georgia worked with an organization in Honduras to help improve care for people with hemophilia.

Patient organizations can also team up, with similarly positive results. These partnerships emphasize activities that can make a patient organization successful. Examples range from helping a newly forming national member organization with fundraising, training board members and setting up summer camps to encouraging regular elections within the organization, working on its constitution or lobbying government officials. For example, through the Twinning Program in 2009, the Quebec chapter of the Canadian Hemophilia Society helped the Tunisian Hemophilia Association develop a Web site and newsletter, and create groups for mothers and children.

“Many chapters think that twinning entails a lot of time and effort, but big differences, such as sharing advocacy skills to increase factor availability, can easily be done,” says Antonio Almeida, WFH programs director.

Hemophilia of Georgia has participated in the Twinning Program twice, first with Chile, then with Honduras. “It sounded like something that would bring a new dimension to our work,” says Trish Dominic, chapter CEO. “We would be helping a country whose patients may not be as fortunate as those in the US. By the same token, we would learn about another culture, people and system of healthcare.”

To get involved, start by talking to your chapter members, contacting the WFH and thinking about which region of the world interests you the most. “It has been wonderful to make friends with the Chileans and Hondurans,” Dominic says. “To help them succeed and to celebrate their success with them, that is what it’s all about.”