More than 4,300 people from 106 countries gathered for the XXIX International Congress of the World Federation of Hemophilia (WFH) in July 2010. Among the crowd were Danielle Schwager, 23, and Mallory O’Connor, 24, winners of the 2010 and 2009 Susan Skinner Memorial Fund Scholarship, respectively.

[Steps for Living: Traveling When You Have a Bleeding Disorder]

Schwager is an active member of the Northern Ohio Hemophilia Foundation (NOHF) and a graduate student in higher education administration and student personnel at Kent State University in Ohio. She was diagnosed as a symptomatic carrier of hemophilia B at age 11. “My pediatrician said there was no way I could have hemophilia because I’m a girl, that I was just a carrier,” she says. “But when I bled for 10 days after having four teeth pulled, we went to a hematologist. That’s when I was diagnosed.”

Lynne Capretto, executive director of NOHF, told Schwager about the scholarship in April 2010. “She knew how involved I’ve been with women and bleeding disorders and thought I might meet other young women with bleeding disorders there,” Schwager says. “The best part was getting to see that many people gathered for one reason. As winners, we had lunch with Mark Skinner and his dad and heard about Susan ­Skinner. I felt so honored to receive a scholarship in the name of such a wonderful woman who did so much.” 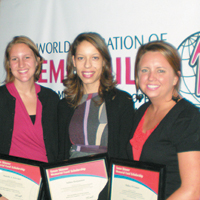 Schwager later joined 25 young adults from 15 countries for an impromptu dinner and networking. “I appreciate the fact that I now have friends from other countries with whom I still keep in touch,” she says. “It was great talking with people associated with the WFH and meeting with other women who are carriers or have bleeding disorders,” Schwager says.

O’Connor, a graduate student in public health policy at George Washington University in Washington, DC, had a similar experience. A carrier of hemophilia A, she has been involved with the bleeding disorders community for years. Her father was on the National Hemophilia Foundation (NHF) board while she was growing up. “I decided to apply because I wanted to be involved on a broader level,” she says. “At the Congress, one woman talked about how for every man with hemophilia, there are two to five women who are carriers. There are a great many more carriers worldwide, but they get involved in smaller numbers.”

O’Connor hopes to change that. “Carriers are often not as directly affected as those who have bleeds. They may have no idea that they even are carriers until they have kids.” For her, the Congress was eye-opening. “It was so great to meet the president and board members of the World Federation, to see them encourage women who are carriers to participate and get involved. I learned that there are many people out there doing something. It’s inspiring.”

Schwager agrees. “On opening day, Skinner talked about his three priorities for next year, and one was women and bleeding disorders. I realized we might be making some headway,” she says. Schwager is motivated now to do even more advocacy for women with bleeding disorders. “The conference gave me the inspiration and drive to work with the community on a local and national level.”