Although your family, friends and neighbors may know you have a bleeding disorder, they may know very little about the disease. Here are a few facts that are not well known outside the bleeding disorders community:

* Bleeding disorders can affect both men and women.

* Von Willebrand disease is the most common bleeding disorder.

* Most people in the world who have bleeding disorders do not have access to adequate diagnosis and treatment.

How You Can Get Involved

Many hemophilia organizations and their chapters around the world use World Hemophilia Day as an opportunity to communicate their messages and goals to their own community and beyond. Activities range from organizing a local open house at a hemophilia treatment center to setting up an information booth at a busy shopping mall. 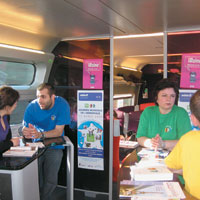 The French Hemophilia Association used World Hemophilia Day in 2009 to educate the general public about hemophilia. Mobile multimedia information booths were set up in passenger cars on trains running across France, offering a unique opportunity to learn the facts. Groups of healthcare professionals and individuals with bleeding disorders rode the trains throughout the day, talking to passengers.

WFH has developed video podcasts that organizations can use to raise awareness. For World Hemophilia Day 2009, WFH produced the video podcast “Together, We Care,” with funding from Baxter, which emphasized the importance and benefits of comprehensive care for people with bleeding disorders. The video is available in 11 languages. On April 14, 2010, WFH launched the second video podcast, “The Many Faces of Bleeding Disorders.”

The Legacy of World Hemophilia Day

WFH chose April 17 as World Hemophilia Day to honor its founder, Frank Schnabel, on his birthday. The handful of small gatherings that began in 1989 has grown into a global event celebrated by 113 WFH member countries.