Access to treatment is one of the biggest challenges facing the majority of people with hemophilia throughout the world. Approximately 75% of those living with hemophilia have inadequate care or lack access to treatment. The World Federation of Hemophilia’s (WFH’s) vision is that one day, treatment for all people with bleeding disorders will be available. This World Hemophilia Day, April 17, 2011, “Be Inspired, Get Involved in Treatment for All” by sharing your story and spreading the word.

How You Can Get Involved

We encourage you to read inspiring profiles of people in the bleeding disorders community, from an American documentary filmmaker to a former Olympic athlete in Mongolia. Then, share your story. 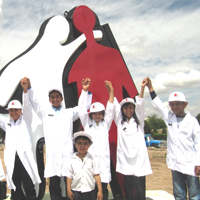 Throughout April, everyone in the bleeding disorders community, including patients, doctors, parents and friends, is encouraged to share their stories and inspire others at www.wfh.org/whd. Every person who posts a story April 1–30 will have their name entered into a drawing to win a digital camera.

Many hemophilia organizations and their chapters around the world use World Hemophilia Day as an opportunity to communicate their messages and goals to their own communities and beyond. Last year, the Romanian Hemophilia Association dyed the fountains red in the capital, Bucharest, to symbolize the suffering of hemophilia patients. The event was part of a successful campaign that resulted in the health ministry approving a 70% increase in the hemophilia budget. Many other organizations around the world organized fundraising activities, awareness days and social media campaigns. How will you celebrate World Hemophilia Day?

The Legacy of World Hemophilia Day