The State of Healthcare Reform

With the loss of the Democrats’ filibuster-proof majority in Congress and the public’s clamoring for Washington to make jobs priority No. 1, healthcare reform has been waylaid the past few months. However, the National Hemophilia Foundation (NHF) remains committed to fighting for healthcare and insurance reform, including eliminating lifetime caps and annual limits, eliminating pre-existing condition exclusions, prohibiting insurance ratings based on health status and allowing dependents to stay on their parents’ health insurance plans longer.

“NHF has primarily focused on the private insurance reforms, because those are the key issues for our community,” says NHF Washington representative Johanna Gray. “We’ve taken the lead on lifetime insurance caps, which have been a huge issue.”

NHF has advocated for healthcare reforms through:

In 2009, the House and Senate passed separate healthcare reform bills, bringing the US closer to healthcare reform that it had been in decades. In early 2010, the two chambers were scheduled to iron out the differences in conference committee between the bills—HR 3962 and HR 3590. However, the Senate unexpectedly lost a Democratic seat in January when Republican Scott Brown was elected to the late Sen. Ted Kennedy’s seat in Massachusetts. This means Democrats no longer have the 60 votes needed to prevent a Republican filibuster.

In mid-March, House and Senate Democrats are working on a compromise that would allow a bill to come to a vote in the House. If the bill passes, the Senate version becomes law. Then, the Senate would vote on separate legislation on agreed-upon amendments to the bill. Continue to stay informed through NHF’s Advocacy and Legislative Updates.

Differences between the Senate and House bills

NHF has made it clear to Congress which provisions of the two healthcare reform bills it supports. Most of the provisions NHF supports are in the House bill. A major concern is that the Senate bill grandfathers existing private insurance plans, meaning existing plans would not have to follow any of the new insurance reforms, including elimination of lifetime and annual caps and pre-existing condition clauses. Here is a synopsis of some of the provisions included in the two versions:

“The states will be required to implement a lot of the healthcare reform provisions, so it’s going to be very important for each state chapter to monitor that in their state,” says Michelle Rice, NHF regional director. “That’s where they need to get to know their insurance commissioner, their Medicaid officials, their state legislature. They need to be staying in close contact with those people and with other health groups in their state to make sure as things roll out that the people in that state are protected.”

Rice also reminds people that even if healthcare reform passes, reform won’t happen overnight. “A lot of these provisions are on time delay. Once a bill passes, there’s still a lot of work to be done. The community must remain diligent in monitoring the implementation process in order to identify potential problems as they arise.”

It will continue to be important for members of the bleeding disorders community to stay involved. While NHF works diligently on Capitol Hill and at the state level, it’s the young man scared about becoming too old to stay on his parents’ health insurance and the dad explaining how his son capped out on his insurance plan when he was still in elementary school that make a difference to lawmakers. It’s critically important that those with bleeding disorders and their family members continue to share their stories with their representatives and senators.

“People in the hemophilia community make wonderful advocates, telling their story, telling their family members’ stories, relating them in ways that members of Congress can relate to and make them want to help,” Gray says. “Part of the reason that NHF has been successful historically is that our community members are engaged and are really effective in their advocacy.” 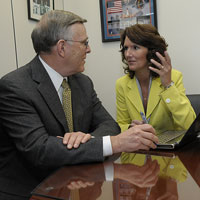 Brenda Neubauer is a good example of an effective advocate. Long active in advocacy efforts from her home in North Dakota, Neubauer became even more energized after one of her sons, who has severe hemophilia B, reached his $2 million insurance cap when he was 12 years old. Jacob, now 15, had been under his father’s self-insured plan. But because Neubauer’s law firm has a different type of insurance plan, she was able to secure new insurance with a $2 million cap.

“Basically, by a fluke, we were able to get him another $2 million [with the same company] because one was a self-insured plan and one was a small-group employer plan. Otherwise he would not have been eligible for any more coverage,” Neubauer said. “That really was a wake-up call that I needed to get more involved.”

Through participation in NHF’s Washington Days, Neubauer called on her senator for help. She began to call and meet regularly with Sen. Byron Dorgan (D-ND) and his staff to discuss how to help people who hit their insurance cap. In 2008 and 2009, Dorgan introduced bills that would increase lifetime caps, which helped raise the profile of a then-controversial issue.

Now, with Congress in a deadlock over healthcare reform, Neubauer says she feels unsettled but knows she can’t give up. She’s been encouraging others in the bleeding disorders community to continue to stress the need for healthcare reform with their state representatives and senators. “Our community needs to mobilize and advocate as a whole. Everyone has a stake in the final outcome of insurance reform and needs to get involved.”

Neubauer says her son’s strength keeps her fighting for healthcare reform. “He doesn’t let hemophilia slow him down or get him down. If I don’t do this, the rest of his life he’s going to be struggling to try to provide for his healthcare. It’s my obligation as his mother to keep fighting for him.”