Genetic counselors often work with parents of an affected newborn or with a pregnant woman who needs assurance that she can deal with the potential of having a baby with a bleeding disorder. They also meet with affected adult men who get tested to help their daughters or pregnant sisters understand their carrier status.

Regardless of the scenario, genetic counseling and testing provide answers, help family members and empower the next generation.

Genetic testing can uncover the exact mutation that causes an individual’s bleeding disorder. In addition to predicting whether other family members are carriers or have a bleeding disorder, this information is also used for research.

But these outcomes can only happen if individuals with bleeding disorders are educated about the benefits of genetic counseling. Then they can make an informed decision about undergoing genetic testing. That’s where genetic counselors come in.

Most clinical tests involve a blood draw or a urine sample at the lab. Genetic testing is different. “We work with patients, sometimes the whole family, to educate them about inheriting genetic diseases and what testing can or cannot do for them,” explains Meadow Heiman, MS, licensed certified genetic counselor (LCGC). She is also clinical research coordinator at the Indiana Hemophilia & Thrombosis Center (HTC) in Indianapolis.

Genetic counselors help the family and the patient’s doctors make sense of the results. Typically, the first step is to have a hematologist pinpoint exactly which bleeding disorder the test should target—hemophilia, von Willebrand disease or another rare bleeding disorder, such as FV deficiency.

Then a blood sample is taken from the affected person to determine his or her genetic mutation and where it is located. Genetic testing locates the mutation in nearly 98% to 99% of people with hemophilia A or B, according to the National Human Genome Research Institute, one of the National Institutes of Health. The institute was founded in 1990 to map the human genome.

When the results come back, usually after two to three weeks, genetic counselors have another conversation with the patient and the family to interpret and explain the results. This is particularly important if the affected person is a newborn. This discussion could include instructions on getting the right medical care and considerations for family members.

“It helps to have the genetic testing done before getting pregnant,” Varga says. That way, a woman knows her risk of passing on a bleeding disorder to her baby.

Knowing that a mom-to-be is a carrier can prompt physicians to take extra steps during delivery. These include having factor on hand during the birth to prevent hemorrhaging, a common risk for women and affected newborns.

For women who are planning to get pregnant through in vitro fertilization (IVF), prior genetic testing can open the possibility of pre-implantation genetic diagnosis (PGD), says Michelle Alabek, MS, certified genetic counselor (CGC) at the Hemophilia Center of Western Pennsylvania in Pittsburgh.

Alabek counseled a couple in which the woman was a known carrier for hemophilia and was also undergoing IVF for unrelated reasons. “We discussed the option of doing genetic testing of the embryos before implantation,” Alabek says. The HTC involved one of the clinic nurses to help the woman understand what a child with hemophilia can do in this day and age, thanks to prophylaxis. “That was a valuable conversation,” Alabek says. “She realized that she had a lot of misconceptions.”

About a third of patients who see Varga for genetic testing do so because they previously had a son who was born with hemophilia, but without a known history of bleeding disorders. Two years ago, Varga counseled a couple whose newborn son was diagnosed with severe hemophilia at birth. The family decided to have the baby tested for his specific genetic mutation.

Knowing the mutation of the affected person, commonly called the family’s index patient, makes it easier and faster to identify the mutation in other family members. This is particularly helpful in identifying women who are carriers. Testing revealed that the boy’s mother was a carrier. “She had no idea until then.” Further testing of the woman’s four younger sisters showed that no one else was a carrier.

Cost is one of the main barriers to genetic testing. Genetic testing for bleeding disorders is often not covered by insurance. It can cost anywhere from a couple hundred dollars to more than $1,000. If the index patient’s mutation has been identified, doctors know what they are looking for and which test will find it. “If not, we may have to keep testing in different ways to find a mutation,” Alabek says. This adds to the costs.

Genetic counseling can turn into a family intervention. Alabek sometimes suggests approaches to help patients when they decide to share their information with family members. “I’ve also seen new mothers have a lot of guilt after they find out they are a carrier,” Varga says. “Moms think, ‘My baby got it from me.’ ” Other couples struggle with deciding whether to continue with the pregnancy.

“This is where our job can overlap with social work,” Heiman explains. Genetic counselors help patients cope with the test results and share them with other relatives. “We don’t leave our patients to struggle with these issues alone.”

Heiman has worked as a genetic counselor in HTCs and in general hospitals. “There are definite advantages to an HTC,” she says. Genetic counselors who see all types of medical conditions may not be as aware of how varied families’ experiences are with bleeding disorders, Heiman explains. “They may not be aware that some people can have mild hemophilia, while others can be severe and can have long-term disability,” she says.

Discussing genetic testing with family members also touches on one of the most sensitive concerns about having the test in the first place—privacy.

Varga occasionally gets questions from her patients about how their genetic information could be used—or misused. “It’s often carriers who are concerned they’ll be dropped from insurance if anyone finds out,” she says.

In 2008, the US Congress passed the Genetic Information Nondiscrimination Act (GINA). Title One of the law prohibits health insurance companies from using genetic information to raise premiums, refuse coverage or determine eligibility, according to the US Library of Congress. Health insurance plans also cannot require people to have genetic testing. Title Two forbids employers from using genetic information to make job assignments or to hire, fire, promote or pay employees.

“The law made it easier to get genetic testing without the fear of losing your insurance or your job,” says George Annas, JD, MPH, chair of Health Law, Bioethics and Human Rights at Boston University. The key word is fear. In reality, there have been no documented cases of discrimination based on genetic testing.

The best way to protect yourself from genetic discrimination is simple: Go to a doctor you trust. And avoid private companies that tell people to send blood and saliva samples in the mail, or urge you to provide private information over the Internet. This is especially important since GINA only precludes information from being shared with employers and health insurers.

Each One for Everyone

Genetic information has already shown promise for predicting and treating other conditions, such as cancer. The hope is that it will do the same for the bleeding disorders community.

There’s also an opportunity for individuals and families to be better informed and better prepared for what it means to live with a bleeding disorder. Having a relationship with a genetic counselor can ensure that people with bleeding disorders have a realistic view of their condition. It also provides you with updates on clinical advances, especially as treatments become more tailored to each person’s condition.

But that can only happen if clinical researchers have genetic information from patients. “There’s a very special group depending on us to move forward,” says Neil Frick, vice president for research and medical information at NHF. “That group is the next generation.” 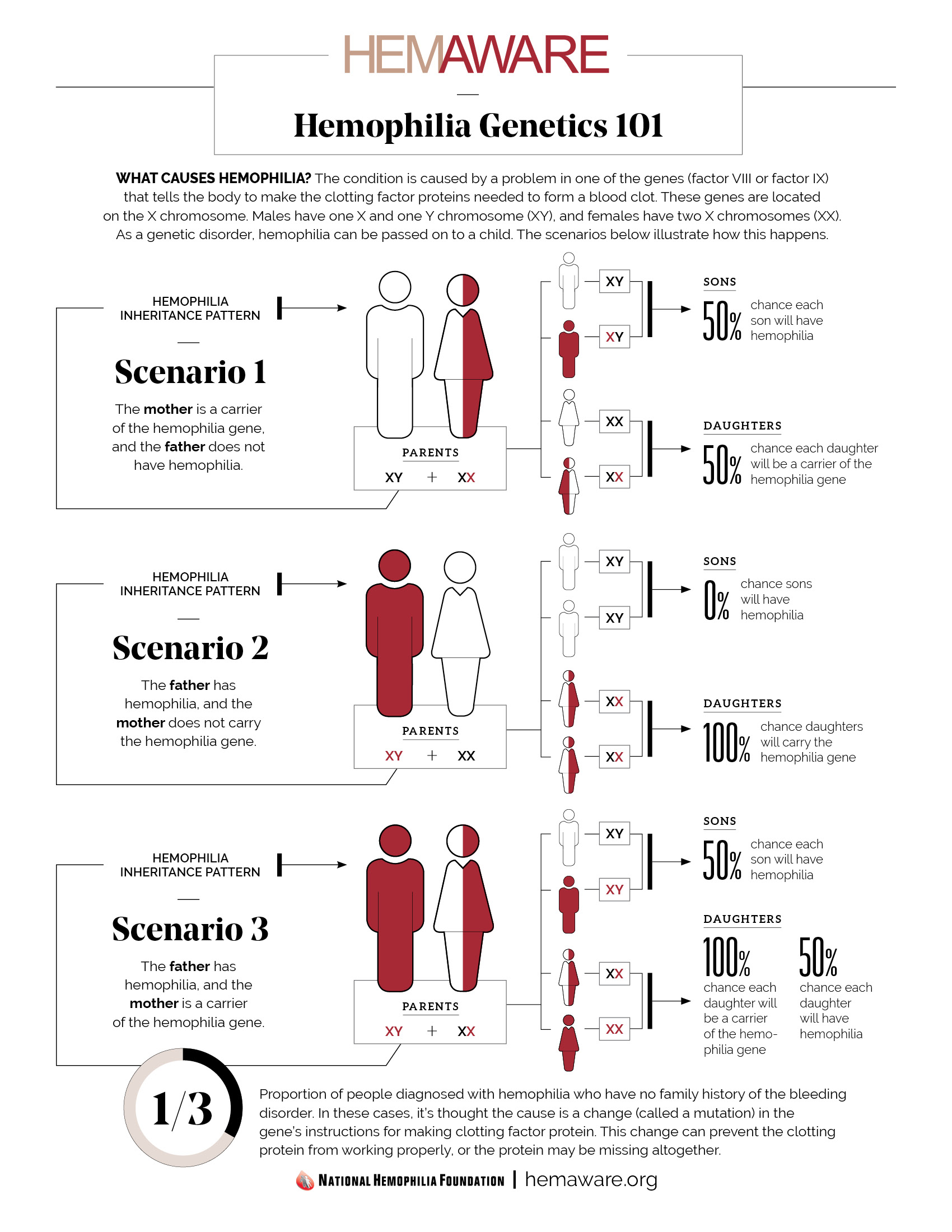