Medical IDs Could Save Your Life

For Robyn Salk, Saturday night is a time to dress up—perhaps a sequined blouse paired with slick, knee-high boots wrapped around a pair of skinny jeans. The penchant for fashion didn’t change when Salk, 38, from Boca Raton, Florida, decided to purchase a medical identification bracelet.

Salk was diagnosed with mild hemophilia B in 2003. She says no one had told her she should be wearing medical identification for emergencies until two years ago at a Florida Hemophilia Association symposium in Deerfield Beach. The bracelet she ordered had black and silver beads—perfect for any outfit, she thought.

But during an emergency room visit, her husband, Jonathan, tapped a nearby emergency medical technician (EMT) on the shoulder. Raising Salk’s wrist, he asked, “Would you know this was a medical ID bracelet?” “Probably not,” the EMT said, waving his colleague over. Both agreed they would have ignored the fancy bracelet as just a fashion accessory.

[Steps for Living: When To Go To the Emergency Room]

“That was an eye opener,” Salk says. “I realized my husband was right. I need to not worry about being fashionable, but about being alive.” Days later, her new bracelet—a silver chain with her medical information engraved on a heart-shaped tag—arrived in the mail.

“It changes the response to treatment in a lot of ways,” explains Jocelyn Bessette Gorlin, RN, CPNP, a nurse practitioner at Children’s Hospitals and Clinics of Minnesota in Minneapolis. “Ideally, the person with the bleeding disorder might get the first response, and the hospital would know to give factor to stop the bleeding before doing a CT scan. This is especially important if the person needs surgery and particularly important with head injuries.”

Despite the importance, Gorlin discovered troubling results during a survey of nearly 100 nurses she completed in 2009 on the use of medical IDs. She found that no official guidelines existed and that parents of children with bleeding disorders rarely used medical IDs for their infants. Many of the nurses and EMTs surveyed had already encountered situations in which a person who had been shot was taken in for surgery without factor or someone died after being infused with the wrong factor.

Gorlin and NHF’s Nursing Working Group developed a set of clinical guidelines that the NHF Board adopted in November 2010 as MASAC document #201, “Recommendation on Use of Emergency Medical Identification Devices for Children.” The guidelines recommend that medical IDs be worn on the person’s body, displaying an easily visible and familiar medical symbol, such as the caduceus, which has two serpents intertwined around a winged staff, or the staff of Asclepius, which has one serpent wrapped around a staff. The Nursing Working Group recommends medical IDs display the person’s diagnosis, factor deficiency and emergency contact.

The risk of choking is one of the main reasons parents often do not use medical IDs for their infants. The guidelines encourage parents to avoid medical IDs with beads, charms or other detachable parts that a child could easily swallow. Gorlin also says that not only can the more fashionable medical IDs be overlooked, but they also tend to break or come off during regular activity. For children younger than 1, the guidelines recommend placing the emergency ID on the child’s ankle.

Most of MedicAlert’s bracelet and necklace styles feature a stainless steel, gold or silver chain and information plate with lettering in myriad colors. Other styles include colorful beaded bracelets, sports bands and watches. “We’ve come a long way, but what has remained consistent is the emblem and the quality of the information engraved,” Srinivasan says. The metal plate on all of MedicAlert’s products has the staff of Asclepius flanked by the words “Medic” and “Alert” on the front.

MedicAlert requires all customers to register as members, so that clinical staff can review their medical information before it’s engraved on the metal plate. In an emergency, the first responder can call a live emergency response service, 24/7, for more specific information on the member. The member’s family contacts are also notified of the incident.

The metal plate with one of the two medical symbols is also a mainstay on the designs offered by American Medical ID.® The Texas-based company’s offerings include mostly metal bracelets, necklace pendants, sports bands and dog tags. Some of the dog tags even double as USB drives. These portable devices can be connected to most computers to save and transfer important medical information.

Toni Bissell, president and founder of the medical jewelry company N-Style ID,™ says she often does what Salk’s husband did—she takes new designs to her local emergency medical personnel to ask their opinion. A creative design, however, is still important. “If people don’t like them, especially children, they will not wear them,” Bissell says. “When children and teens have a medical condition, they may already feel like an outcast. They want to wear something that everyone else might want. That actually makes them feel proud. I’ve had parents say, ‘I bought this for my child, and now the other one wants one.’”

The Right Medical ID Style for You 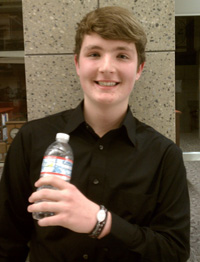 Joe Mileson, 15, a high school sophomore from Spokane, Washington, opted for a cotton sports band to identify his diagnosis, severe hemophilia A. His band is decorated with music notes, a nod to his love of singing. He once tried a necklace, but says it felt weird and he would take it off to go swimming. His next style, a watch, pinched his arm.

Mileson knows other teenagers with chronic conditions who have gone as far as having their diagnoses tattooed on their bodies. People with bleeding disorders who are considering a tattoo should discuss the issue with their hemophilia treatment center first. Beyond any health concerns, tattoos may not be that effective. “The tattoo would have to be very large to put the necessary information, and that information might change,” says Gorlin. “And the tattoo might fade over time.”

Mileson agrees tattooing is not necessary, especially with so many styles of medical IDs available. “There’s a style for everyone,” he says. He eventually settled on the sports band because it is versatile enough to be worn during choir practice and lifeguard training drills without coming off.

While some teens and adults choose the medical IDs based on style, parents with small children may be more concerned about making sure it survives their child’s curiosity. Tiffany Intal’s daughter Annika, 2, was diagnosed at birth with severe factor VII deficiency. “I saw the medical ID jewelry as a form of insurance,” says Intal, a medical assistant in Daly City, California, and hemaware.org’s Diary of a HemoMom blogger. “You buy insurance for your house, for your car and for all the other ‘what ifs.’ If I’m unconscious during an emergency, or if someone can’t speak on her behalf, then she’ll have the medical ID jewelry.”

A necklace or bracelet was out of the question, because Annika probably would have tried to chew them off. So, at the NHF Annual Meeting in 2009, Intal purchased a blue beaded anklet for Annika. At first, it sent Annika into a fit when Intal tried to put it on. But in the past year, the little girl has become accustomed to wearing it, although she still fiddles with it and manages to kick it off during tantrums.

Intal says most clinicians notice the anklet, but the most common reaction from strangers, is, “That’s so pretty.” Intal uses such comments as an opportunity to educate and to clarify myths about bleeding disorders, such as the belief that little girls cannot have them. “People usually seem very receptive to the information.”

Now, Intal’s two older boys, almost ages 8 and 6, who do not have a bleeding disorder, want medical IDs, too.