The Pros and Cons of Infusion Devices

Kristie Cimino, 33, remembers the first year of her son Saverio’s life as a blur of bleeds, bruising and relentless needle pricks. Saverio needed frequent infusions of clotting factor to prevent bleeds caused by his severe hemophilia B. But when nurses struggled to stick veins hidden deep in his chubby legs and arms, Kristie and her husband decided it was time for a central venous access device (CVAD) to ease the infusions.

The biggest advantage of CVADs is that they help take the guesswork out of locating hard-to-find veins. They also enable more frequent infusions and more independence from medical staff, alleviating some trips to the hospital.

For Kristie, Saverio’s port made all the difference. The frequent infusions kept him from developing a potentially debilitating target joint. Gone were the emergency room visits and missed veins. “It gave him a chance to just be a boy, to be himself,” she says.

But ports have disadvantages, too—most of all, a high risk of developing an infection, a blood clot or even thrombosis. Being vigilant about sterilizing the port site helps cut the risk, so nurses thoroughly train parents on how to cleanse and flush the port. Still, up to 30% of children with ports develop at least one bloodstream infection, according to research published by pediatrician Janna Journeycake, MD, in the journal Haemophilia in January 2008. Journeycake is also assistant professor of pediatrics, division of hematology-oncology, at the University of Texas Southwestern Medical Center in Dallas. Worse still, the infection rate climbs as high as 50% in those who develop an inhibitor, an antibody produced by the immune system in response to the factor product. These children need to infuse daily to fight the inhibitor, thus raising the odds of infection, Journeycake says.

To decide if a CVAD is right for your child, it helps to look at the pros and cons, weighing the costs and benefits.

Here’s a rundown of the most commonly used devices:

A port, typically a Port-A-Cath, is a small device that is surgically implanted under the skin, usually in the upper chest above the heart. To infuse, a person places a special needle into a container, or reservoir, connected to a catheter inserted into a blood vessel near the heart. This popular CVAD can be used for several years and requires no dressings or external lines. Infections can occur, however, so the infusion site must be kept completely sterile.

Doctors insert this type of catheter into a vein near the heart, usually through the chest, for short-term use. Factor product is injected into a cap on the end of the tube, typically located on the arm or chest. Dressings over the cap are necessary to prevent the external site from becoming infected. They must be changed often to keep the infusion area sterile.

These catheters, which include the brand name Hickman and Broviac® catheters, are surgically implanted under the skin and inserted into a vein in the neck or chest. Infusions are done through the external end of the catheter. The catheter can stay implanted for a year or more.

A PICC is inserted into a vein in the arm and connected to a large blood vessel in the chest. Infusions are done through the external end of the catheter. The devices are cost-effective and easy to install, but can only be used for several weeks or months.

The most immediate risk from ports is excessive bleeding when they are implanted surgically. But the more common complications are blood infection and clotting.

Since a port is foreign material implanted in the body and accessed frequently from the outside, it can easily get infected. When this happens, bacteria grow rapidly in the bloodstream, causing dangerous contamination and fever.

“If a port infection is not managed properly it can lead to sepsis, or even death,” says  Journeycake. “Children need to be closely monitored if they have a fever, especially if it’s not explained by another childhood illness. They need a blood culture. If it comes up positive, they should be placed on IV antibiotics immediately to treat the infection.”

At highest risk for infection are children younger than two years old and those whose ports are accessed more often, says Leslie Raffini, MD, assistant professor of hematology at The Children’s Hospital of Philadelphia. Poor oral health can also trigger infections by sending bacteria from infected gums or decaying teeth into the bloodstream. Failure to adequately sterilize the port site before and after infusion can also cause infection.

A hematoma, or bruise, can occur on the surface (or septum) of the port device. It is caused by leakage of blood from the port to underneath the skin when the needle is removed from the port. If this occurs, the port should not be used, since the accumulated blood is an excellent growth media for bacteria, and may lead to an infection. A hematoma is more likely with frequent, such as daily, access, or in individuals with inhibitors. However, this can easily be prevented by applying direct pressure over the puncture site once the needle is removed. Pressure should be applied for 10 minutes.

Clotting is another common problem with access devices. Up to half of patients with ports develop blood clots in the vein accessed by the port’s main line, according to studies Journeycake has done at her clinic. Some patients develop clots in the device itself. Flushing the port with a blood-thinning medication can help prevent clots and possible infection. Physicians may also need to use blood thinners to treat clots. In some cases, the only way to break up the clot is to remove the port.

Other problems can develop when a port’s line, or catheter, separates from its reservoir. As a result, factor can leak into tissue surrounding the port. The port’s line can also get twisted, in which case the entire device must be reinstalled. As children grow, ports can also get displaced and cut off circulation in affected tissue. This happened to Kristie’s son Saverio on the brink of his third birthday. A venogram showed the port was pushing on nearby veins, so doctors removed it. After that, the Ciminos learned how to infuse Saverio’s arms.

When it’s time to decide if your child should have a CVAD, consider the following questions, suggest Rueleen Lavergne, RN, a quality assurance nurse at Hemophilia of Georgia in Atlanta, and Jennifer Maahs, MSN, PNP, a nurse practitioner at the Indiana Hemophilia and Thrombosis Center in Indianapolis:

• Is the hemophilia severe? Is there an inhibitor?

Children with mild or moderate hemophilia generally do not require the multiple infusions that warrant a CVAD, the nurses say. Most CVAD candidates have severe hemophilia. Those with severe hemophilia B are less likely to need a port because they infuse less often than those with hemophilia A—twice a week versus three times a week or every other day, typically. However, a person who develops an inhibitor will likely need a CVAD regardless of severity because of the need for immune tolerance therapy. Even some adults with inhibitors opt for CVADs.

• How close is the hospital?

Healthcare access is part of the decision-making equation, say the nurses. If, for example, a child needs to infuse only twice weekly and the hospital is five miles away, nurses can easily travel to your home to help you infuse. However, if you’re hundreds of miles from a healthcare facility or HTC and your child needs daily infusions, a CVAD might be a better option.

Consult your doctor when considering a CVAD because this is a big decision, the experts advise. If you choose a port for your child, try to have it removed as soon as possible. None of these devices last forever. “A CVAD should be removed in four years, preferably sooner, because the longer it’s in, the more it poses significant health risks,” says W. Keith Hoots, MD, head of pediatric hematology at the University of Texas Medical School in Houston.

Kristie now says IV infusion is even easier than port infusion. “It’s less stressful because there’s less emphasis on sterility,” she says. “And Saverio helps out with it, too. He picks his own vein. His favorite part is pulling the butterfly needle out of his arm when it’s all over.” 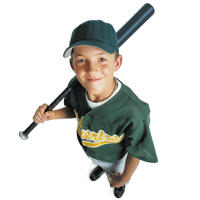 When a port is installed, you might wonder if you need to limit your child’s activities. It can be unnerving seeing a small protrusion under the skin.“My boys were both rail-thin, and I worried they’d hit their ports on something,” says Hemophilia of Indiana Executive Director Michelle Rice, whose sons both have severe hemophilia B. She needn’t have. Her boys safely played baseball and flag football, swam, golfed and bowled until they had their ports removed at ages six and seven.

The only sports off-limits with ports are the same rough-and-tumble ones to be avoided by all people with hemophilia, advises Rueleen Lavergne, RN, a quality assurance nurse at Hemophilia of Georgia in Atlanta. However, your child’s teachers and school nurse should be notified about the port—in case something happens.

“We advise the school, school nurse, PE and homeroom teachers that if the child gets hit by a ball over the port, to apply ice and alert the parent,” says Lavergne. School staff should also watch for fever, which could signify a port infection, she notes.

Fortunately, most children have their ports removed by the time they’re old enough to attend school all day. Until then, parents and caregivers should keep a close eye on them. 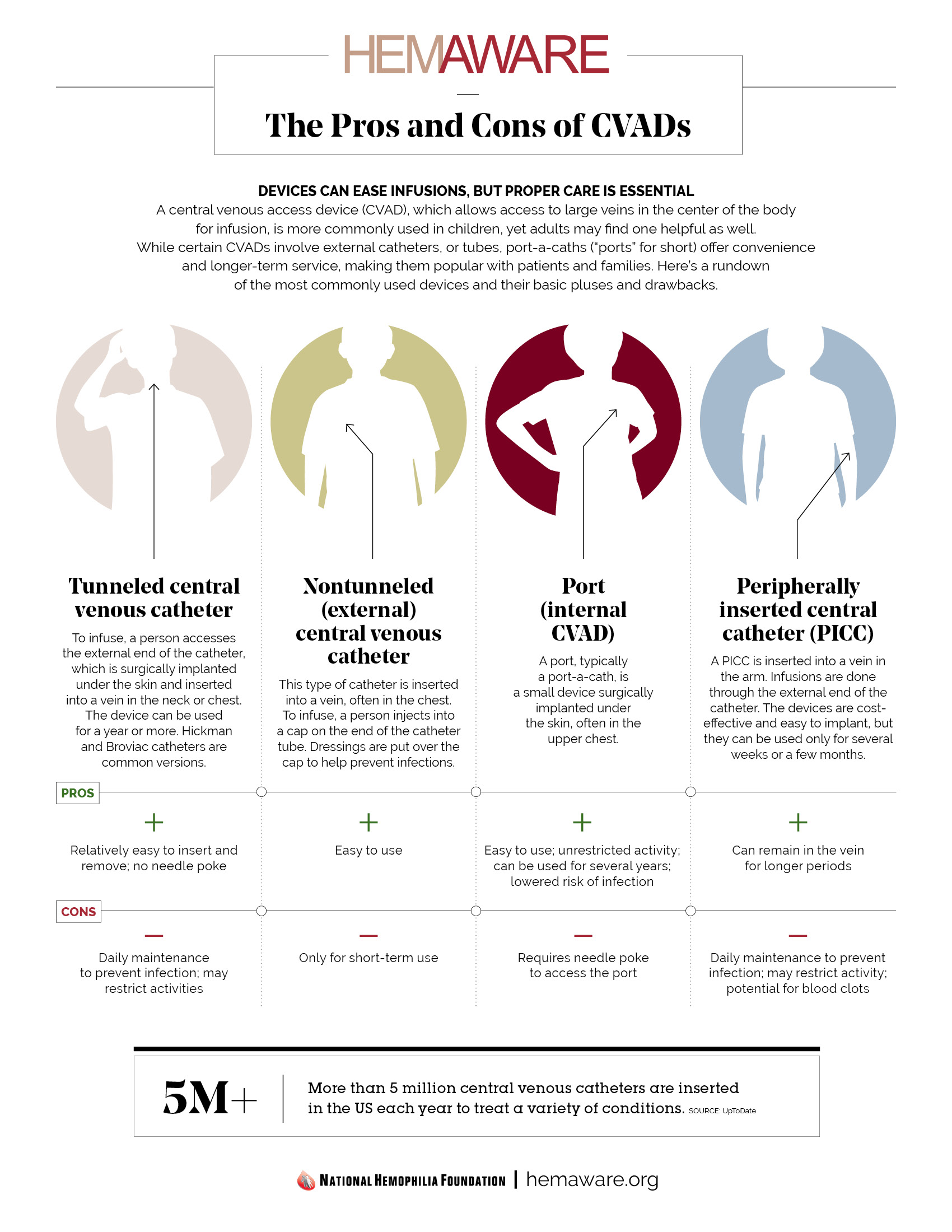