✓ Inhibitors, antibodies to infused factor product, only occur in people with severe hemophilia.

✓ I’m middle-aged, past the cutoff for inhibitors.

If you mentally checked off these statements, check again. Results of the US Centers for Disease Control and Prevention’s (CDC’s) Haemophilia Inhibitor Research Study (HIRS) are turning a lot of thinking about inhibitors on its head.

Many previously held beliefs about inhibitors were disproved by the in-depth study, published in Haemophilia in 2014. Further, the study prompted the National Hemophilia Foundation’s (NHF’s) Medical and Scientific Advisory Council (MASAC) to issue a recommendation in October 2015, urging all people with hemophilia to be screened every year or more often, if needed. “We felt compelled to issue a call to action related to standardized testing and surveillance for inhibitors,” says Steven W. Pipe, MD, MASAC chair. He is pediatric medical director of the Hemophilia and Coagulation Disorders Program and director of the Special Coagulation Laboratory at the University of Michigan in Ann Arbor. “We need to maintain a high level of surveillance across the hemophilia treatment center (HTC) network across all ages, because inhibitors can happen to anybody.”

This call to action is not intended to cause alarm. Rather, it’s a rallying cry to bring the community together in force to identify, treat and hopefully eradicate inhibitors. Find out how NHF, the CDC and your HTC are combining forces to mount an integrated inhibitor intervention.

Antibodies are proteins that attack foreign substances, and they are typically beneficial. They protect your body from harmful agents that can cause disease. But with hemophilia, your body may have never produced enough factor VIII (FVIII) or factor FIX (FIX) to register as safe on your immune system’s radar. For some people, it’s only a matter of time until infused factor product is tagged as a foreign agent. Then inhibitors travel in the blood to the infusion site. There, they bind to the factor product, preventing it from doing its job in forming a clot.

The less clotting factor your body produces, the greater the risk you may have in developing an inhibitor. Generally, 20%–30% of people with severe hemophilia A, 3%–13% of those with mild hemophilia A and 2%–5% of those with hemophilia B develop inhibitors, says the CDC. Your risk is higher if your sibling has an inhibitor. Further, some studies show your risk may double if you’re African American or Hispanic.

Inhibitors are measured in Bethesda units (BUs) in an inhibitor titer, a blood sample. A low-titer inhibitor is <5 BUs; a high-titer one is >5 BUs. Inhibitors are further classified as high- or low-responding, depending on how quickly and strongly your immune system reacts.

To rid the body of persistent inhibitors, the current most successful therapy option is immune tolerance induction (ITI). Similar in concept to allergy desensitization, ITI introduces your body to increasing amounts of factor product. The goal is that eventually your immune system recognizes clotting factor as safe and accepts it.

The HIRS study is unique in size and scope. It collected data from a group of 1,163 patients from 17 HTCs across the country. Unlike previous studies, not only were patients with severe hemophilia included, but also those with mild and moderate forms. The subjects ranged in age from 2 months to 84 years. More than half were 2–19 years old. The majority were white, with 7.4% black and 6.4% Hispanic. Some were followed for up to six years.

Detailed infusion logs on each patient were supplied by the HTCs. Blood was drawn on participants at key points: when they enrolled, yearly, before they changed products and if an inhibitor was suspected. Specimens were sent to the CDC’s Clinical Coagulation Laboratory in Atlanta, where they were tested for inhibitors. They were also genotyped to determine specific mutations, or genetic abnormalities, including those that cause inhibitors. 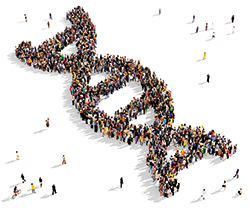 The Who
“The biggest surprise for treaters was our finding that all patients were at risk for an inhibitor,” says J. Michael Soucie, PhD, lead study author. He is associate director for science in the CDC’s Division of Blood Disorders. Another surprise was the discovery of inhibitors in 23 people—61% of whom weren’t aware of it, nor were their HTCs. “This really astounded some people, because it was believed that if you have an inhibitor, you’re going to know it,” Soucie adds.

More than one-third of the 23 inhibitors were in people with mild or moderate hemophilia, not usually considered at risk. “It’s extremely important to identify mutations in those patients, because the development of an inhibitor can transform a mild patient into a severe patient,” says Connie H. Miller, PhD, study co-author. She is a consultant to the CDC’s Division of Blood Disorders and former director of the Clinical Coagulation Laboratory.

The When
The general rule of thumb has been that inhibitors are produced early on or at least during the first 50 exposure days to factor product, says NHF. But that’s not what HIRS found. In fact, nearly one-fourth of the inhibitors were detected in people with more than 150 exposure days, some of whom were over 40 years old. This second inhibitor peak has been documented in other studies. The cause may be attributed to age-related changes in the immune system. “People tend to develop antibodies to things later in life that they didn’t earlier,” says Miller. “We need to make sure we don’t omit that segment of the population.”

The What, Where and Why
Of the HIRS subjects with elevated inhibitor titers, one-third had a low-level titer, <1 BU. Recall that any value below 5 BUs is considered low. “We’re doing a lot of research on low-level titers to determine if they’re clinically significant,” says Miller. One of three scenarios play out with a low-level titer, she says: It may increase, becoming a high-titer inhibitor; it may be transient and disappear; or it may stay at a low level.

Besides inhibitor testing, the CDC also screened the HIRS blood samples for mutations. Once again, the findings were eye-opening: 342 mutations in people with hemophilia A, 89 in those with hemophilia B. More than one-third had never been reported in the world.

The link between mutations and inhibitors is genetic. “The mutation present is probably the single most important factor in whether a person develops an inhibitor,” Miller says. That’s because mutations to the FVIII or FIX gene can make it unrecognizable to your immune system.

Nearly 80% of the 23 people newly diagnosed with inhibitors had high-risk mutations for developing an inhibitor. “We can pinpoint particular mutations that are high-risk in mild and moderate patients,” says Miller. One such mutation is ARG-593. “The majority of our patients with mild ­disease who had an inhibitor had that specific mutation,” she adds.

Community Counts You In

Although HIRS is wrapping up, the CDC carries on its surveillance of inhibitors and other complications of bleeding disorders through the Community Counts program. The initiative picks up where the Universal Data Collection (UDC) program left off when it ended in 2011. One of Community Counts’ components is the Registry for Bleeding Disorders Surveillance. It collects blood samples yearly from people with hemophilia and other bleeding disorders, testing them for such blood-borne diseases, such as HIV and hepatitis C, and screening them for inhibitors.

As of March 1, 2016, Community Counts had enrolled 6,582 people in the registry. “We do between 100–200 inhibitor­ tests a week,” Miller says. “So we are surveying the entire country.” One of the benefits to patients enrolled through their HTC is early intervention. “Annual screening provides the opportunity to pick up an inhibitor early,” says Soucie. “Your chances of being tolerized (your immune system accepting factor product) are much greater with a lower titer inhibitor.”

Through Community Counts, the CDC is striving to answer such questions as: How many people in the US are living with an inhibitor? We don’t know the magnitude of the problem, Miller says. When they’re diagnosed, how are they treated? “Treatment seems to vary from HTC to HTC as to how patients are managed,” says Miller. Do some products trigger inhibitors more frequently than others? “We want to monitor what’s going on, particularly as new products are introduced,” she adds. HIRS did not look at product-related inhibitors, but Community Counts does. “We will have more data on products as we go forward,” Miller says. (See sidebar, “SIPPET Says.”)

Inhibitor insights will increase as the data grow and more studies are completed. “With a large number of people participating, we’ll have the capability of picking up any changes in inhibitor frequency on a national basis,” says Miller. Such trends could then be conveyed to patients and their hematologists, leading to improved outcomes.

Using the CDC’s coagulation lab for HIRS highlighted a need for improved quality control nationwide in labs analyzing blood samples for inhibitors. “There has not been one consistent method, so sites varied in how they did their inhibitor assays,” Miller says. “There are some specialized nuances that can lead to some differences in the sensitivity in being able to pick up inhibitors,” says Pipe.

During the study, the CDC fine-tuned its inhibitor screening protocol. It experimented with different materials and made necessary modifications so the test is reproducible, says Miller. The CDC is working with the North American Specialized Coagulation Laboratory Association to publish results in 2016. “We will be advocating for getting the test standardized across HTCs so that people will do it the same way,” Miller says.

There’s another bright spotlight illuminating inhibitor research. By joining Community Counts, you’re helping increase understanding of inhibitors and decrease their impact, says Soucie. “No other country in the world is offering this centralized testing on a regular basis and monitoring the whole population,” he says.

The future approach for dealing with inhibitors will be multifaceted, says Pipe. “It’s going to come through education, better products, better treatment strategies and better surveillance,” he says. “Together, these will make the ultimate difference.”