For many people with bleeding disorders, pain is a part of daily life. There is the familiar discomfort and stiffness of a bleed, and there are the sharp throbs of arthritic joints. And then there are the ordinary aches and pains that affect everybody.

Frank Beaudoin knows them all. The 36-year-old stay-at-home dad in Dracut, Massachusetts has severe hemophilia A and chronic arthritis in most of the major joints of his body: right ankle, left knee, both hips, right elbow and left shoulder. “I feel pain daily,” he says. “It’s not pleasant.”

More than an uncomfortable annoyance, pain can affect every aspect of daily life—the ability to work a full day, attend school or engage in routine activities. Pain can limit physical abilities and dramatically affect relationships. Even after being together for five years, Beaudoin says, “My fiancée still has a hard time understanding that one day I’ll be fine, the next I’ll be laid up and can’t even walk.”

Every person with a bleeding disorder deals with pain at one time or another, often less than effectively. “It’s at the point where I’ve learned to live with the pain,” says Gina Salemme, 34, of Newfield, New York, who has moderate hemophilia A and type 2 von Willebrand disease.

Although synovitis, an inflammation of the joint-lining membrane, in both ankles often makes walking uncomfortable, Salemme endures it to care for her children and work as a corrections officer. “I’m a single mother of three, and I refuse to take pain meds because I have to be able to function,” she says. “I’ve been dealing with pain so long that if I can walk, I’ll ignore it.”

In order to get a good picture of how people with bleeding disorders manage pain, investigators at the Henry Ford Health System in Detroit and Munson Medical Center in Traverse City, Michigan, conducted a collaborative pilot study among several hemophilia treatment centers (HTCs) located in Indiana, Michigan and Ohio.

The study revealed that people with bleeding disorders use a variety of remedies to deal with pain, some of which are inadequate.

With support from Novo Nordisk, Wyeth and Hemophilia Health Services, the pilot project has evolved into a National Pain Study. The goal of the research, according to investigators, is to improve pain management for people with bleeding disorders. 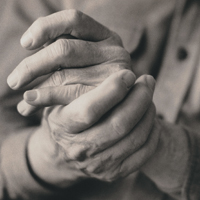 People with hemophilia and other bleeding disorders typically experience pain from two sources:

Pain may be acute or chronic. Short-term acute pain can last for hours or days and is a signal that something is wrong. Although acute pain may be severe, it can often be controlled through treatment.

In contrast, chronic pain is defined as long-term discomfort, lasting months or longer, that usually results from damage to the body, such as arthritic joints. It is managed differently than acute pain.

Cindy Bailey, the director of physical therapy at Los Angeles Orthopaedic Hospital, says that people with bleeding disorders should remain alert when it comes to new or different pain. New pain could signal a bleed or an acute pain that needs treatment before it becomes chronic.

When you feel pain, the first order of business is to identify the cause and eliminate it, says Bailey.

“It seems so simple, but most people with pain don’t think about what caused it,” she says. “They will usually immobilize [a painful limb] or do something to relieve the discomfort at that moment, but not think about what caused it. It could be a certain activity, or something as simple as walking a little more at the mall. The number one thing is to identify what the probable cause is and stop doing that.”

An infusion of factor may be appropriate for acute pain if a bleed into muscle or a joint is suspected. However, research from the pain management pilot study suggests that a high percentage of people with hemophilia treat chronic pain with factor, which may be inappropriate. Pain that persists after an infusion of clotting factor is likely due to some other cause.

Bailey says treatment of acute pain for people with bleeding disorders is the same as for any musculo­skeletal injury that involves bones, joints and muscles. It can be easily remembered by the acronym RICE: Rest, Ice, Compression and Elevation.

The first step in treating acute pain is to immediately stop using the injured body part and rest it for 24 to 48 hours. In case of a suspected bleed, healthcare providers usually recommend splinting the affected joint, which limits movement and further bleeding, allowing the injury to heal.

Applications of ice can further reduce pain and swelling. They help constrict blood vessels and limit bleeding. Compression, or wrapping the affected area with an elastic bandage, also helps reduce swelling and limits bleeding. Finally, it’s best to keep a painful extremity elevated as much as possible to reduce swelling.

Although the RICE method is a mainstay for treating injuries, data from the National Pain Study pilot project show that it is underused by people with bleeding disorders.

Even when people with bleeding disorders apply the RICE method, they often need pharmaceuticals to also help with pain relief. According to the pain study, the most commonly used drugs by respondents are acetaminophen and nonsteroidal anti-inflammatory drugs (NSAIDs).

Many people with bleeding disorders take a type of NSAID known as a COX-2 (cyclooxygenase-2) inhibitor, which is believed to have a limited impact on blood clotting. COX-2 inhibitors include celecoxib (Celebrex), rofecoxib (Vioxx), and valdecoxib (Bextra). In 2005, The Food and Drug Administration (FDA) withdrew Vioxx and Bextra from the market because of an increased risk of heart attack and stroke among people who took the drugs. Pfizer’s Celebrex is the only COX-2 inhibitor that remains on the market.

In June 2005, the National Hemophilia Foundation’s Medical and Scientific Advisory Council (MASAC) issued a recommendation (Document #162) that advised caution for the use of all COX-2 inhibitors, including Celebrex, in people with bleeding disorders, especially children. The recommendation says, “If a COX-2 inhibitor is prescribed, it should be used at the lowest effective dose for the least necessary duration.”1

Other drugs commonly prescribed for short-term pain relief include opioids, such as oxycodone (Percocet), morphine, methadone and codeine. OxyContin is a commonly prescribed, sustained-release formulation of oxycodone. The most common side effects of opioids include drowsiness, nausea and constipation. Less commonly, people experience itching and breathing problems. Opioids and other pain relievers can also lead to abuse, dependency and addiction (see “(Un) Comfortably Numb,” HemAware March/April 2004, p. 36).

Although reliable statistics are not available, experts suggest that chronic pain is common among people with bleeding disorders. It often has a significant emotional component, resulting in stress, depression, anxiety and anger. People with hemophilia who suffer from chronic pain should discuss their options with the staff at an HTC. 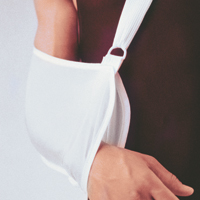 Many people with chronic pain tend to limit their activities to avoid discomfort, which can be counterproductive in the long run.

Bailey recommends that people with bleeding ­disorders who have chronic pain engage in low-intensity­ activities. “Start with stretching programs and easy walking, and progress into some activity or sport,” she advises. “If people have hemophilic arthropathy and a lot of joint pain, they can start with something easy like pitching horseshoes or lawn bowling.”

Physical therapy can help people maintain flexibility and strength, which will eventually reduce the discomfort, although it may be painful in the short term. “It’s difficult to get over that hump and get going, because they’ll be in a little more pain for a while,” says Bailey. “It’s hard to convince people that getting better doesn’t mean they’re going to feel better right away.”

If pain persists for three months or more, Bailey says, the person should be referred to a pain management center, which uses a comprehensive approach to chronic pain that addresses a person’s physical, emotional and cognitive needs. Treatment at a pain center can include physician services, physical therapy, counseling and occupational therapy.

Because depression and anxiety are often linked to chronic pain, a low dose of antidepressants is often prescribed. These drugs increase brain chemicals that signal relaxation and well-being, helping control pain that isn’t relieved by other means.

Antidepressants include selective serotonin reuptake inhibitors (SSRIs) such as fluoxetine (Prozac), paroxetine (Paxil) and sertraline (Zoloft); tricyclics such as amitriptyline (Elavil) and imipramine (Tofranil); and selective serotonin and norepinephrine reuptake inhibitors (SNRIs) such as venlafaxine (Effexor) and duloxetine (Cymbalta). SSRIs have been linked to an increased risk of bleeding.2 Treatment for depression or any medical condition should always be discussed with the staff at a hemophilia treatment center.

Antidepressants don’t work right away, but become effective after a steady dose of medicine is built up in the body over time. Side effects include blurred vision, constipation, difficult urination, dry mouth, fatigue, nausea and headache. Additionally, in 2004 the FDA stepped up warnings that antidepressants increase the risk of suicidal thoughts and behaviors in children and adolescents.3

“If you have chronic pain,” she says, “get moving and get a good night’s rest.” 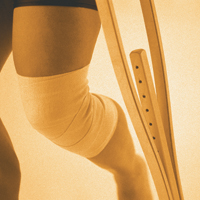 People with bleeding disorders who are experiencing acute, short-term pain should consider the R.I.C.E. method of treatment, says Cindy Bailey, a physical therapist at Orthopaedic Hospital in Los Angeles.

Rest – Stop using the injured body part. Continued activity may result in further injury, more discomfort, and perhaps bleeding into tissues or a joint space. Rest the injured area for 24 to 48 hours. Resume activity gradually to prevent hurting or re-injuring the area. A sling may be needed to rest the upper extremity, while a cane or crutches can help avoid bearing weight on an affected lower extremity.

Ice – Applications of ice reduce pain and help to constrict blood vessels and limit bleeding. Apply ice to the affected area for 20 minutes at a time for 48 to 72 hours. Don’t place ice directly on the skin; put the ice in a plastic bag and wrap it in a towel or cloth.

Compression – Wrapping the affected area with an elastic bandage will help reduce swelling and limit bleeding. The bandage should be snug, but should not cut off circulation.

Elevation – Keep a painful extremity elevated as much as possible. This helps reduce swelling.