To play or not to play? For kids with bleeding disorders, that is the question—at camp, at school, at home, anywhere. Most sports and other physical activities have some level of risk. The severity and type of bleeding disorder vary, so what may be unsafe for one person might be a perfect match for another. (However, contact sports, such as football and hockey, are not recommended for people with bleeding disorders.) There’s no one-size-fits-all answer. However, there is a new workbook that will help you make an informed decision.

My Game Plan is a five-page booklet with questions that help kids—and adults—evaluate their physical abilities and any limitations placed on them by their hemophilia or other bleeding disorder. For example, it asks you to list your problem joints and to note any pain you may have. Then, you are asked to describe the benefits and risks of the activity you want to play.

“Rather than telling you what sports are safe and what aren’t, it’s a tool that will help guide a discussion,” says physical therapist Sherry Herman-Hilker, PT, of the University of Michigan’s Pediatric Hemophilia and Coagulation Disorders Program in Ann Arbor. “It’s a discussion in which kids are involved, rather than one that simply leaves the decision up to a nurse or physical therapist.” 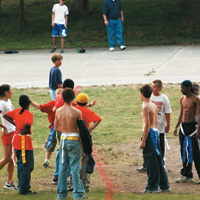 My Game Plan, which Herman-Hilker helped develop, was inspired by an experience at the Hemophilia Foundation of Michigan’s Camp Bold Eagle in Holton. In 2007, campers played a game of Capture the Flag, a Bold Eagle favorite. But something alarming happened. Nineteen of the nearly 60 campers experienced bleeds or other injuries during the three-hour game.

The camp’s head nurse, Jim Munn, RN, MS, nurse coordinator at the University of Michigan’s Pediatric Hemophilia and Coagulation Disorders Program, says the reaction among staff was quite emotional. “We always expect a few injuries,” Munn says. “That’s what happens when kids play. But 19? We had to ask ourselves, ‘Did we do this to the kids? What could we have done better?’”

To play Capture the Flag, players are split into two teams. Each team has a “flag,” usually something colorful and easy to carry. The ideal playing field is large—at Camp Bold Eagle, the game is played over the entire 50-acre site. The field is divided into two territories. Flags are placed deep inside each team’s territory, and players have two primary missions: to steal the other team’s flag and to defend their own. Capture the Flag is not a full-contact sport, but at Bold Eagle, it involves a lot of running and dodging over different types of terrain. Players can fall or collide with one another. 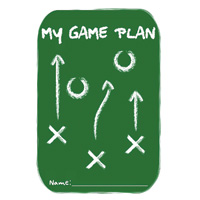 Courtesy of University of Michigan Hemophilia and Coagulation Disorders program

After seeing one injured camper after another, Herman-Hilker, the camp’s physical therapist, wanted to ban the game. But many counselors had attended the camp as children and treasured their memories of playing Capture the Flag. Their passion for keeping the game matched ­Herman-Hilker’s own desire to get rid of it. Listening to them, she says, was a game-changer. “The debate shifted from ‘How do we get rid of it?’ to ‘How do we keep it, but make it safer?’”

That debate led to the workbook, which was distributed at Camp Bold Eagle the next summer. After completing it, each camper met with a health center staffer to decide the best and safest way to play. Those for whom running puts them at risk were assigned positions that were more stationary, but still integral to the game. “That year we did not have any injuries,” says Herman-Hilker.

The workbook can be used to evaluate any physical activity. “It gets kids to take a serious look at an activity and to critically analyze it,” says ­Herman-Hilker. “Then they talk about it with their parents and their healthcare provider.”

Herman-Hilker recalls one 8-year-old boy who wanted to play football. After filling out the workbook, he realized it was not the right sport for him. “He came to that decision on his own,” she says.

Munn says the workbook can be used by adults with bleeding disorders as well. “I’d give it to a 30-year-old who was thinking of joining a soccer league, because the same questions about safety apply,” says Munn. “We want to get people to think about what they want to do versus what they are capable of doing safely.”