They experience similar bleeds and bruises as men with mild hemophilia, yet they’re called “symptomatic carriers.” For women, that label is confining and confounding. It also places their health at risk.

“Using the term ‘symptomatic carrier’ doesn’t validate us,” says Tammy Davenport, 38, of Kingwood, Texas, a regional ­coordinator for Matrix Health. “We have very different issues than men, but they’re no less severe.” Daven­port’s father had hemophilia A and had her tested for it when she was 5. Her factor VIII (FVIII) assay was 23%. The doctor told her parents, “She has mild ­hemophilia. If she ever has any surgeries or accidents, she may need factor.”

However, that news did no good when Davenport went into labor with her son in 1994. “I went into the hospital explaining that I had hemophilia, and they needed to be aware of that,” she says. The doctors told her, “That’s impossible. Women can’t have it.” Consequently, they ordered no factor product. Davenport developed a large hematoma with a golf ball-sized knot on her spine from the epidural. It took a year to heal.

The burden for women whose concerns are discounted is both physical and emotional. When their bleeding symptoms are undertreated, they experience health complications. When their concerns are brushed aside, they feel frustrated and angry, losing confidence in the medical community.

But women are finding ways to get around the carrier barrier. Through advocacy and education, patients and providers are pushing for recognition of mild hemophilia.

In genetics, a carrier is typically defined as a person who has a genetic mutation for a disease that can be passed on to a child, but who doesn’t have symptoms. But for hemophilia, the label “symptomatic carrier” describes a woman who not only has the mutation but also has symptoms. 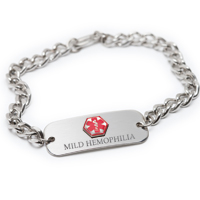 “I want to clarify this terminology because people get this confused all the time,” says Marion A. Koerper, MD, medical adviser of the National Hemophilia Foundation (NHF). She is also director emerita of the HTC at the University of California, San Francisco, where she practices pediatric hematology. “Being a carrier is a genetic designation, not a diagnosis. It says nothing about how you are clinically.”

Clinical information is partially provided by measuring the factor level. “Regardless of whether you’re male or female, if your factor FVIII (FVIII) or factor IX (FIX) level is below 49%, you can have bleeding symptoms,” Koerper says. “You have mild hemophilia.”

The hemophilia diagnosis can be confirmed by genetic studies. “As genetic testing is becoming more available, particularly gene mutation analysis, it’s becoming increasingly helpful,” says Steven W. Pipe, MD, medical director of the Pediatric Hemophilia and Coagulation Disorders Program at the University of Michigan, Ann Arbor. For a woman with no family history of hemophilia, the lab can analyze her DNA for the most common FVIII mutation, the intron 22 inversion, a reversal of a section of DNA. It accounts for 40%–50% of cases of severe hemophilia A. “We’ve identified some women from that second-step testing,” Pipe says.

The concept that women can’t have hemophilia needs to be corrected. “That’s a misconception that we probably have to devote some more attention to for education and outreach purposes,” Pipe says. “If they have bleeding symptoms that can be managed with the interventions we have available, then they should be considered as having a mild bleeding disorder.”

According to NHF, the normal plasma levels of FVIII range from 50% to 150%. Mild hemophilia is defined as having a FVIII level of 6%–49%. Because women have two X chromosomes, the level of FVIII they produce depends on the balance between the normal X chromosome and the abnormal one carrying the hemophilia gene. If the balance is equal, the FVIII level would not typically be lower than 50%.

“If the greater proportion of their FVIII level is dependent on the mutant FVIII gene, their factor levels can clearly be in the low range,” Pipe says. Additionally, some carrier women with FVIII levels as high as 50%–60% may still experience bleeds.

Mild hemophilia’s trademark symptoms—bruising, nosebleeds, heavy menstrual periods (menorrhagia), and prolonged bleeding after trauma or dental or surgical procedures—can be missed or dismissed in girls and women. Danielle and Heather Schwager, 25, twins from Strongsville, Ohio, had symptoms during childhood. “We were kids who grew up playing outside all the time, and we were always bruised,” says Danielle. The twins’ mother, Vickie, a neonatal nurse practitioner, periodically questioned the pediatrician, wondering if her daughters had hemophilia B, like her father. “He kept telling me, ‘No, females don’t have hemophilia,’ ” Vickie says.

Five years later, Danielle bled for 10 days after having four teeth pulled. Her oral surgeon and orthodontist sensed something amiss and referred the family to the hemophilia treatment center (HTC) in Cleveland. Factor level testing confirmed Vickie’s hunch. “My factor level was about 8% or 9% when I was diagnosed with mild hemophilia B,” says Danielle. Heather’s was about 40%. Those diagnoses took more than a decade.

During NHF’s Annual Meeting in Chicago in November 2011, Koerper and Vickie conducted an educational session for women with mild hemophilia. Many women recounted similar experiences. “These women know they’re bleeding too much,” Koerper says. But their doctors disregarded their concerns, saying: “You got a big bruise because you banged your leg.” Problems result when a surgery is performed without a treatment plan. “They’ll have their gallbladder out, and then they have bleeding complications,” says Koerper.

Davenport warned her new hematologist, who was inexperienced in treating women with bleeding disorders, that her factor level might soar from the stress she was feeling before a hysterectomy, but then would plummet afterward. Because her factor level skyrocketed to 80%, the hematologist took no precautions. Davenport woke up in the recovery room hearing her doctor tell the staff, “I don’t know what’s causing her bleeding. She doesn’t have hemophilia.”

“When they call you a ‘symptomatic carrier,’ and that’s your label, you tend not to be treated seriously,” Davenport says. For her, that resulted in post-op bleeding. For others, it might mean joint damage and arthritis from untreated bleeds or serious complications following childbirth.

The emotional and behavioral consequences for women with mild hemophilia who perceived errors in their medical care were documented in a 2011 study in Haemophilia by Nisa Renault and researchers at Dalhousie University in Halifax, Nova Scotia, Canada. The 11 women interviewed cited 264 negative emotional responses, including anger, doubt and mistrust.

A doctor’s disbelief can lead to a patient’s disillusionment. “It is frustrating to try to explain this to physicians who I would expect to know something about bleeding disorders,” says Vickie.

Davenport was devastated when her doctor denied that she had hemophilia after her hysterectomy. “It was very hard on me to doubt the fact that maybe I believed this for 35 years, and it just wasn’t right,” she says. The pain went deep, as Davenport lost a comforting family connection. “That took away my identity—all I had of my dad.”

Perceived mistreatment by healthcare providers also produced negative behavioral responses in the Canadian study subjects. Some women minimized the importance of their symptoms. Others avoided conflict by finding a new doctor or treatment center. Some were so desperate that they treated themselves with factor product they borrowed from a family member. However, this practice is not recommended and may even be dangerous. The borrowed medication may be the wrong dosage or wrong medication entirely from what your physician would have prescribed, says Pipe.

A positive behavior that emerged among women in the Canadian study was to advocate for themselves or others. Some insisted on in-depth testing or better treatment, or seeking another opinion.

When Davenport needed emergency gallbladder surgery, she chose a smaller hospital closer to home. There she found an understanding hematologist. “He said, ‘Okay, you seem to know what you’re talking about,’ ” says Davenport. “He went with my history, not my labs.” She brought in factor and saw the hematologist three times before the procedure. “I was on prophylaxis for a week out,” Davenport says. “I had zero bleeding problems.”

Vickie and Danielle are involved in local advocacy through the Northern Ohio Hemophilia Foundation in Cleveland. “Our local task force set up a program for dental professionals to make sure that they were educated on women’s bleeding disorders,” says Vickie. Further, the chapter has invited gynecologists and obstetricians to evening meetings to educate them. Danielle put together a brochure for the chapter to raise awareness about women’s bleeding disorders. Both are on NHF’s Women’s Task Force, broadening their advocacy reach.

Critical Role of the HTC

Building a relationship with your HTC is critical for women with bleeding disorders. “Primary care physicians don’t always understand the nuances of the testing,” says Koerper. They may order the standard screening tests, see that the partial thromboplastin time [PTT, a measure of clotting time] is within normal range, and tell women they’re fine, she says. “They don’t understand that they have to order the actual FVIII or FIX activity test.” The HTC can also order further tests to pinpoint the mutation. A 2011 study in Haemophilia showed that a woman’s mutation, not factor level per se, was a better predictor of bleeding. (See “Test Takers,” HemAware Fall 2011; “What’s Your Genotype?” HemAware Spring 2010.)

Once you receive a mild hemophilia diagnosis from your HTC, you can get the benefits of comprehensive care. “We can offer them the same things we do for men with mild hemophilia, guidance around procedures and hemostatic support if necessary,” Pipe says. “We can help them with their family planning.”

Prior to surgery or dental procedures, your HTC can create a treatment plan to prevent or stop bleeding, which the dentist or surgeon can follow. “They were very aggressive with my treatment when I had dental work,” says Davenport of the staff at her son’s HTC. “I was on prophy, and everything was taken care of.”

Treatment centers can also help untangle insurance hassles. Their experience with medical coding can make all the difference. “They have to use the appropriate code on every single encounter with you and for any treatment you need, such as factor, so that the insurance company will pay for it,” Koerper says.

Without the diagnosis, the “carrier” label may be interpreted to mean you are asymptomatic. “A genetic designation does not equal a diagnosis,” says Koerper. “To an insurance company, it means nothing.” The Schwagers discovered that the hard way. “With the ‘symptomatic carrier’ label, we run into a lot of insurance issues. They see my birth control pills as contraception and an optional medication,” Danielle says. At times, the insurer has denied her coverage.

Mild Hemophilia: Not for Men Only

Mild hemophilia should no longer be a “for men only” diagnosis, says Davenport. “If you have the symptoms of a disease or disorder and you have the labs to prove it, then you have it. It doesn’t matter what your gender is.”