See Letters to the Editor in response to this article.

Amy Denton and her husband, Jay, knew they wanted to be parents. But they had concerns: Amy’s father has severe hemophilia A, and she has known all her life she is a carrier. “I bleed like a patient with mild hemophilia,” says Amy, a 34-year-old Howell, Michigan, resident who recently earned a master’s degree in business.

When prenatal testing revealed that her first child would be a son with hemophilia, Amy was worried. “I had seen the significant limitations my father had faced because of his hemophilia,” she says. But knowing about advances in treatment helped her come to terms with her unborn son’s condition. “It’s like there’s the new hemophilia and the old hemophilia,” she says. “They’re as different as night and day.”

[Steps for Living: Family Planning: The Next Generation]

The Dentons were determined to have a natural, drug-free childbirth despite their high-risk status. However, Amy eventually received an epidural to help her cope with her long labor, which continued for 24 more hours. “I was in labor for three days,” she says. Her physician did not offer the option of a cesarean section. “That has to be in the ­Guinness Book of World Records,” she adds jokingly.

When Nolan was born, he not only had severe hemophilia A, but also a large brain bleed in the front of his head and another in the back. “It looked like he had a golf ball on his forehead,” Amy remembers. “We had a one-day-old baby, and they were talking about brain damage and saying we could lose him,” she says. “It was a devastating spiral.”

Fortunately, Amy says, the story had a happy ending. Today, Nolan is a kindergartner and a big brother to his sister, Claire, 4, who is a carrier. “It’s a different scenario than what we were told it would be,” Amy says. “I’m his mother, but I think he’s a genius.” 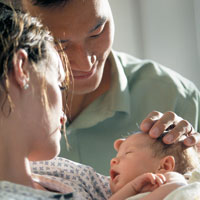 The Dentons aren’t the only ones with a good outcome: Experts agree that with the right planning and support, women who have bleeding disorders or are carriers can manage pregnancy and childbirth with no problems. But there are things to keep in mind before, during and after pregnancy to help keep mother and child safe.

Before and During Pregnancy

The risks pregnancy poses depend on the type and severity of bleeding disorder, says Barbara A. Konkle, MD, a full member of the Puget Sound Blood Center and professor of medicine at the University of Washington School of Medicine in Seattle.

Women with type 1 von Willebrand disease (VWD) and carriers of factor VIII deficiency, for instance, benefit from the increase in von Willebrand factor and FVIII levels that occurs during pregnancy for all women. “Many of these women don’t have problems at all,” Konkle says. Factor levels may even normalize during pregnancy, although bleeding symptoms may recur when levels fall after delivery. In contrast, women with severe bleeding disorders may need clotting factor support during pregnancy and delivery. For women who are carriers, she adds, factor levels determine one’s risk of bleeding complications during childbirth.

Prior to conception, women should meet with a hemophilia treatment center (HTC) hematologist and other staff, as well as a high-risk obstetrician, to determine their factor level or carrier status. In addition, they should discuss how to manage risks and learn what life is like for today’s children with bleeding disorders, Konkle says. It’s also important to meet with the anesthesiologist ahead of time. “You want the whole team ready and prepared,” she says.

Prenatal testing can also help in planning, says Peter A. Kouides, MD, medical and research director at the Mary M. Gooley Hemophilia Center in Rochester, New York. If an ultrasound reveals that the fetus is female, for instance, no special precautions need be taken during delivery, he says. 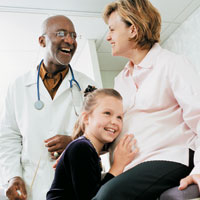 “We’ve heard patients say their ob/gyns have told them prenatal testing is too dangerous—that they could bleed to death,” says Kouides. With proper precautions, however, the tests should be safe for the woman. But both procedures carry a small risk of miscarriage. “The bleeding disorder shouldn’t be an excuse not to do it if the patient really wants it,” Kouides says. Some women, he points out, choose to terminate their pregnancies if testing uncovers a severe bleeding disorder.

Parents who want to ensure that their child won’t have a severe bleeding disorder can consider preimplantation genetic diagnosis, Konkle says. The process involves in vitro fertilization. Eggs are fertilized in a lab, and early embryos are then tested for the specific bleeding disorder mutation. This allows implantation of an unaffected embryo. “That process carries with it all the issues related to in vitro fertilization—what you have to go through, the costs and risks,” she says.

Delivery is the time of greatest concern, says Andra H. James, MD, director of the Women’s Hemostasis and Thrombosis Clinic and associate professor of obstetrics-gynecology, Division of Maternal Fetal Medicine, at Duke University in Durham, North Carolina. The goal should be to avoid prolonged labor and the use of forceps or vacuum extraction.

“The least risk to the woman would be if the baby comes easily through the vagina,” James says. “The greatest risk is if the woman goes through labor and then winds up with a C-section.” Because babies affected by bleeding disorders have a 4% risk of brain bleeds when born vaginally, she recommends cesarean delivery for babies known to have a bleeding disorder or potentially affected babies.

Postpartum bleeding is another concern. Women with type 2B VWD are at special risk. They may develop thrombocytopenia, a disorder in which the blood contains an insufficient number of platelets, and experience severe hemorrhaging following childbirth.

Although obstetricians are on heightened alert for hemorrhages in all women who have just given birth, new parents should also contact their HTC as soon as possible. “We often joke that right after they call their parents to announce the birth, they should call us,” says Kouides. He will visit postpartum women to help assess bleeding and factor levels.

The pediatric hematologist also gets involved at this point. If the delivery was traumatic, for instance, the infant may have bleeding in his brain. Or the heel stick used to collect blood for routine screenings may cause bleeding. The pediatric hematologist shares recommendations about cord blood testing and other matters with the obstetric team, says Amy L. Dunn, MD, assistant professor of pediatrics at Emory University School of Medicine and the Aflac Cancer Center and Blood Disorders Services at Children’s Healthcare of Atlanta. Cord blood testing, in which a blood sample is drawn from the umbilical cord immediately after birth, is used to confirm the presence of a suspected disorder.

Dunn sends a memo to the ob/gyn outlining how to do cord blood testing, what the concerns are with the particular baby and where to send the results. As soon as mother and child are home from the hospital and feeling up to it, says Dunn, it’s time for their first visit to the HTC. That not only gets the infant off to a healthy start but can also help assuage parents’ feelings of anxiety or guilt, she says.

“It’s really important that they know they’re not alone in this,” Dunn says. “There’s a whole treatment center behind them.”

When Mary Smith* was a child, she was sure her hemophilia would prevent her from having children. “I remember my parents telling me when I was quite young that I probably wouldn’t be able to have children,” says Smith, who has moderate hemophilia B. “And I remember how crushing that was.”

When Smith reached adulthood, she wasn’t sure she wanted to have children. “My main concern was what would happen to me,” she says. Smith, who contracted hepatitis C through a contaminated blood transfusion when she was a child, was concerned about undergoing additional transfusions during childbirth. “I didn’t want to take the risk of getting something else,” she says. “The odds are very, very small. But what are the chances of a woman having hemophilia? I do.”

Smith was also concerned about the possibility of passing on her hemophilia—the result of a genetic mutation—to a child. “I wanted it to end with me,” she says.

By the time Smith was married and in her mid-30s, her attitude and circumstances had changed. “The recombinant factor wasn’t available when my husband and I were first married,” she explains. “As that became more readily available and widely used, it was very reassuring—that this was something I could take that would essentially raise my factor level to that of any other woman delivering a baby.” Plus, she says, the product would help her child lead a more normal life if he or she had hemophilia.

With a go-ahead from her HTC and the ob/gyn recommended by her hematologist, Smith gave birth to a son. “They said I bled less than some women who don’t have any bleeding issues,” she remembers. To her joy, her son did not have hemophilia, and the daughter born a few years later was not a carrier. “I felt like I got lucky twice,” Smith says. Her advice to other women with bleeding disorders? “Having children is absolutely, positively doable!”

*Name and identifying characteristics have been changed to protect privacy. 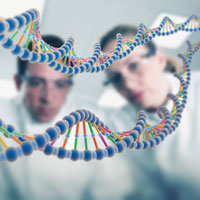 Once she’s pregnant, determining if a woman is a carrier of a bleeding disorder can be tricky. Checking her factor level can offer some clues, especially if it’s low. But even if her level is normal, that doesn’t rule out being a carrier, because carriers can have normal levels. Making diagnosis even more difficult, factor VIII and von Willebrand factor levels rise during pregnancy.

“To find out for sure if a woman’s a carrier or not, we really need DNA testing,” says Barbara Konkle, MD, a full member of the Puget Sound Blood Center and professor of medicine at the University of Washington School of Medicine in Seattle.

Called genotyping, this test looks for the genetic mutation that causes the bleeding disorder in the woman’s relatives. This simple blood test costs about $1,000 to $1,500 if no other family members have been tested, but can be less expensive if a family member with hemophilia has already been tested and the mutation is known. Insurance does not always cover the test.

Women are encouraged to seek information about the test from their local hemophilia treatment center (HTC). Your HTC can conduct the test and interpret and explain the results. It may take several weeks to get the results, so women should be tested as early in the pregnancy as possible.