Eileen Bostwick knows that raising a toddler with severe hemophilia A means constantly trying to strike a balance between encouraging independence and obeying a primeval need to shield your child from pain and injury. Her solution when her son, Jeff, was young was fairly common among parents of children with bleeding disorders: “We decorated the house in ‘early foam rubber,’” she laughs. “We wrapped table and chair legs in pipe insulation, covered the wrought-iron railings on the stairs and had him in knee and elbow pads, and a helmet.”

Although she phased out such dramatic physical precautions as her son grew and his condition was better controlled, suppressing her protective impulses proved challenging for Eileen. Jeff is now 19 and goes to college five hours away from their home in Dayton, Minnesota, but she is still trying to find a balance. “The maternal instinct for anyone—not just parents of children with bleeding disorders—is to keep your child cocooned. I still find myself trying to do that. It never goes away,” says Eileen, 58, a biotechnology consultant with a PhD in physiology.

According to Mavis Harrop, MSSW, LCSW, a social worker for Vanderbilt University Medical Center’s Hemostasis and Thrombosis Center in Nashville, Tennessee, the emphasis in the bleeding disorders community today is on transitions—helping families move through stages that will allow children to achieve full independence. “Parents do have mixed feelings about their children taking more responsibility for their care and treatment. We try to help them understand that creating an independent, confident child is a reflection of the great job they’ve done as parents,” she says.

This is accomplished through small, instructive steps, Harrop explains. “Transitions begin when children are young. When they can dress themselves, you might begin putting out two sets of clothing and allowing them to choose the outfit they want. Once in school, you could buy them an alarm clock so they can begin getting themselves up. These are little steps that everyone takes.”

All children, not just those with a bleeding disorder, need to start early to learn how to be responsible for their own care. Harrop uses the analogy of teaching a child to do laundry: “The first step might be having the child put dirty clothes in the hamper; next, he or she could watch the parent fold and put away the clothes, then practice doing it, and so on. What’s important is not to expect perfection the first time. Kids are easily discouraged, so if it’s not done exactly the parent’s way, that’s OK.”

Similarly, getting children comfortable with self-infusion begins early as a series of steps, she notes. “For example, some families have mats that show infusion steps. A first for a child would be to clean off the mat and wash his hands, then remind the parent to wash his or her hands. A next step would be watching the parent mix the factor, then mixing the factor himself.” Continue using small steps, until the child can stick himself with the parent standing by.

“Sometimes [children] freak out while infusing, and that’s OK, but you can’t push them at that moment,” says Harrop. “Be encouraging and have them try again next time. It takes patience, and practice, on both sides.”

Harrop adds, “And while parents may worry a little more [about their] child with a bleeding disorder, and find it harder to let go, they still need to do their work on that part, right along with their child.”

Like many parents of children with bleeding disorders, Eileen wanted her son to feel invested in his own care as early as possible. “With encouragement from the physicians and nurses at the University of Minnesota treatment center, we started involving Jeff when he was about four,” she explains. “We had him swabbing the tops of the bottles with alcohol and handing me the supplies to start to give him that sense of control.” 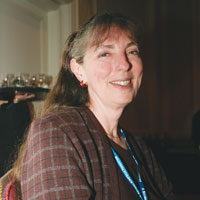 But giving kids control eventually leads to parents giving up control, which can be uncomfortable. Although her son had learned to self-infuse through his port when he was seven years old while at hemophilia camp, Eileen was taken aback when, at 14, Jeff asked to go to the National Boy Scout Jamboree—11 days and hundreds of miles away from home. To accomplish this, not only did he need to be confident in infusing without supervision, he needed to know when and how to ask for help. “I was terrified,” she recalls. “He had this goal in mind and was willing to learn the mechanics, but I wanted to be certain he could articulate his needs to responsible adults and healthcare providers if necessary.”

One thing Eileen insisted upon was for Jeff to meet one-on-one with his scout leader before the trip. She needed him to explain everything about his condition, its treatment and what the leader might be asked to do in an emergency. “We role-played the discussion beforehand, so Jeff was able to do it on his own. It was a big step for him,” she says.

“Self-infusing is just the beginning of transitioning into independence,” says Harrop. “Starting when children are around ages 13 to 15, we ask the parents to step out of the room while we talk with the young person to get them used to asking questions on their own. Learning to communicate with healthcare professionals is a large part of being independent.”

Still, not every hemophilia treatment center provides the same level of education and support on transitions. Because of the need for consistency in this area, the National Hemophilia Foundation (NHF) formed the multidisciplinary Transition Task Force, of which Harrop was a member, to produce a set of guidelines to help families manage and achieve their child’s series of transitions to adulthood. These “Transition Guidelines for People with Bleeding Disorders” are available through HANDI, NHF’s information resource center.

Rita R. Gonzales, 48, an entrepreneur and business consultant in Houston, is a mother of four, including two sons with severe hemophilia A: Aaron, 19, and Damian, 12. She serves on the NHF Board of Directors. She says that from the beginning, she had to fight the impulse to overprotect her first son when he was diagnosed as a newborn. “I didn’t even want to bring him home from the hospital. I knew he was safe there,” Rita recalls. “But very early on, I decided that my job was going to be to teach him to not need me. This goes against every instinct a mother has.”

Rita decided to take a strategic approach, looking far into the future at each milestone Aaron would reach—infusing at home, starting school, physical education classes, camp, scouting trips, high school and, finally, leaving home for college.  She vowed to begin planning for each one—psychologically as well as practically—up to two years in advance.

A significant transition is starting school. Being able to trust teachers and staff who’ve had little experience with a disorder can require a great leap of faith. But that leap is less daunting if parents take the time to prepare all the people involved.

Rita took the approach of making herself a visible educational resource for her children’s school. When Aaron first enrolled, she initiated meetings with the school nurse and the principal. “I basically gave them an introduction to hemophilia and tried to make them feel informed and comfortable about having my children there.”

Throughout her boys’ school years, she was an active volunteer on campus. “I wanted to make sure all the teachers and staff saw me, got to know me and felt comfortable with me, so they would know I’d never get mad if they needed to call me—or an ambulance—if they felt it necessary.” She also arranged for school personnel to come to her local hemophilia chapter meetings. Further, she got the chapter to recognize and award school staff for their contributions to understanding bleeding disorders.

All too soon, childhood is over. When a child with hemophilia first leaves home, to go to college or to strike out on his or her own path, caregiving parents—particularly mothers—may have trouble adjusting to a diminished or changed role. “There is a hole in my life now,” Eileen admits. “I miss the involvement and the closeness of what we shared. I’ve chosen to fill that void by serving on the Board of Directors for the National Hemophilia Foundation. Now I keep track of what’s going on in the bleeding disorders community, politically and medically, and I can share that with Jeff.”

“When a child leaves home, parents become more of a true partner in the process of managing hemophilia, rather than being in charge,” says Harrop. “But there’s no need to totally abdicate—you’re still there to support them as a safety net, and that is comforting even for an adult child.”

Just ask Eileen; she still fields occasional late-night phone calls from her son, who is wise enough to begin these conversations with the assurance of “I’m okay!” before asking her advice on a bleed or other health problem. “I try to be there as a backup,” she says. “He knows he can call me anytime for guidance or reassurance, but that he will deal with things himself. And he does.”

At various points in their young lives, kids with hemophilia are likely to share their parents’ mixed feelings about becoming independent, and these doubts often coalesce around the issue of self-infusion. Taking over that role from their parents disrupts a natural dependency that can be very comfortable. Self-infusion can also be inconvenient, sometimes uncomfortable, and unsettling to the daily routine in lots of little ways.

But getting past this resistance is essential, says Mavis Harrop, MSSW, LCSW, a social worker for Vanderbilt University Medical Center’s Hemostasis and Thrombosis Center in Nashville, Tennessee. “A lot depends on how the parents approach the whole process. If they are happy and excited for their child, that makes it easier.” It also helps to give kids some sense of freedom and ownership over the process, she says, like letting them choose when they want to infuse and which vein to use. “Their choices will have to be limited at first, but will expand as they grow older.”

Finally, parents should stress to reluctant children how the world will open wider to them when they are more independent. “Show them it’s a good thing—they can go camping, spend the night with friends and enjoy some freedom,” says Harrop. That’s bound to appeal to every child.