The Importance of Adhering to Factor Regimens
: Rebecca A. Clay
Posted
May 1, 2010
Updated
August 29, 2017
Family Matters

Read about the iPhone app Hemolog.

Donna LeBrun has a full-time job as a field service representative for a home care company—a position that can require a couple of days of travel around Louisiana every week. She and her husband, Carl, also have three young sons: Bailey, 10; Colby, 3; and 19-month-old Hayden. Bailey and Hayden have severe hemophilia A.

But no matter how frenetic the schedule of this family from Denham Springs, Louisiana, there’s one thing they always make time for: prophylactic factor infusions for Bailey three times a week. “Sometimes it might get pushed back an hour or so,” Donna admits. “But it’s on the top of our priority list, so we make sure it’s taken care of.”

Adherence is more important for patients like Bailey who have severe hemophilia and infuse regularly than for those with less severe bleeding disorders who infuse only when they need it. Part of what motivates the family is the experience of Donna’s brother, Joey Dunaway. Now 37, Dunaway grew up without benefit of prophylactic factor, experienced joint damage as a result and now uses a wheelchair. “We see a tremendous difference in the life Bailey’s been able to have because of prophylaxis,” says Donna. She plans to start Hayden on prophylaxis soon.

Bailey was 14 months old when he began prophylaxis with a port placed in his chest. The port came out a few months ago, giving the fourth-grader a unique show-and-tell opportunity at school. Bailey learned to self-infuse at bleeding disorders camp last summer, so now he and his parents take turns. “We each have our favorite vein,” laughs Donna. 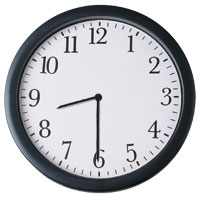 The family wasn’t always so cheerful about infusions. Bailey went through a phase when he rebelled against the regimen. “He’d say, ‘I’m not bleeding. I don’t need the medicine,’” remembers Donna. On those days she sometimes let him go an extra day without factor. “He never had any breakthrough bleeds, thankfully.” The recent transition to intravenous injections was a little tough. At first, Bailey was a bit frightened. Now infusions are part of the family routine. “It’s just become a way of life,” she says.

Not everyone may be as committed to their regimens as the LeBrun family, however. Although both prophylactic regimens and on-demand therapy for bleeds can prevent joint damage, disability and potentially life-threatening complications, individuals with bleeding disorders may not always follow their doctors’ recommendations. They may skip infusions, use the wrong dose or infuse at the wrong time of day.

Keeping logs of infusions can help keep patients on track, experts say. Some factor manufacturers promote the use of Web-based and handheld electronic systems, such as Bayer’s EZ-LOG Web diary, for logging and transmitting information to the hemophilia treatment center (HTC). Further, some insurance companies may require logging to prove that factor is being used appropriately. Logs can also help patients, families and healthcare providers identify challenges to adherence and come up with solutions.

The Cost of Nonadherence

According to the World Health Organization, individuals who have chronic illnesses in industrialized nations stick to their treatment plans only half the time. But for individuals with severe hemophilia, the price of nonadherence can be high.

By maintaining a measurable factor level in your system on a regular basis, you can prevent joint bleeds, which prevents joint damage. You can also avoid missed days of school or work and long-term disability, says Natalie A. Duncan, MPH, disease management program manager at the Indiana Hemophilia & Thrombosis Center in Indianapolis. “If you miss a dose, or if you chronically miss doses, you’re putting yourself at risk of having a bad outcome.”

Failing to follow a regimen can also increase costs, Duncan adds. “Prophylaxis is a pretty expensive treatment regimen.” If you only follow a prophylactic regimen part of the time, she says, you end up with joint bleeds. “Joint bleeds, in addition to making patients’ lives miserable, can be associated with surgery, hospitalization or long-term physical therapy—things that really add up,” Duncan says. 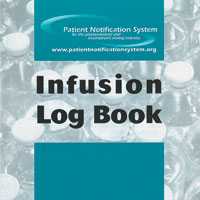 Duncan and her colleagues developed a standardized adherence measure called VERITAS-Pro (see “Learn More” section). From the questionnaires they have learned that individuals overall, especially those on prophylactic regimens, report very good adherence. Children who are infused by a parent are significantly more adherent than teens and adults who infuse themselves.

The worst area of adherence, according to Duncan’s research, is administering factor at the right time. “Ideally, they should do it in the morning, so they have better factor coverage when they are most active,” says Duncan.

Communication is another area that needs work. “A lot of patients are so used to treating themselves that if they do have problems, they’re reluctant to call us,” Duncan says. “They think it will inconvenience us.” The researchers have also found that when people skip infusions, it’s usually because they don’t have time or it’s not convenient, not because they merely forgot.

If you’re having trouble adhering to your regimen, tell your HTC staff. “What’s most important is that patients are honest,” Duncan says. “They’re not going to get in trouble. No one’s going to scold them.” Instead, the HTC can help you overcome the practical challenges that sometimes make adherence difficult. If an every-other-day schedule is too hard to maintain, for example, perhaps three times a week would work. (This may not be possible if you have inhibitors, however.)

Sometimes it’s not just the practical challenges that hinder adherence, says Sue duTreil, PhD, LCSW, senior counselor at the Louisiana Center for Bleeding and Clotting Disorders. She is also an adjunct assistant professor at Tulane University. Normal developmental stages can also bring challenges, duTreil says, especially when it comes to teens. “Our adolescents often test the boundaries of their independence,” she explains. Plus, they often want to be like everyone else—like their peers who don’t have to give themselves regular infusions.

Summer camp often provides the setting for children to see their peers with bleeding disorders learning to infuse, taking some of the stigma out of it. Staff can help reinforce the importance of adherence.

Logging infusions can help patients, parents and treatment teams identify and overcome such roadblocks to adherence. Logging can be as basic as tearing off the factor box top and writing the date and time on it, duTreil says. Other patients rely on spreadsheets, either homemade or provided by their HTCs. Still others use Web-based programs, such as the Advoy system administered by the American Thrombosis and Hemostasis Network (ATHN) or those offered by factor manufacturers and homecare agencies. Soon, there will even be an iPhone logging application (see sidebar, “One Patient’s Solution”).

The most important thing to remember is that adhering to a regimen and keeping logs ultimately benefit you.

Most HTCs use the term “adherence” rather than “compliance” for a reason, duTreil says. “Compliance” means doing something because the doctor says so, she explains. Adherence means taking the information and figuring out for yourself how important it is to do what the doctor is saying. “The plan should be something you and your medical team can agree on. Adherence is a two-way street.”

“Technology enthusiast” is how Michael Schultz describes himself. So when the 23-year-old senior at Western Kentucky University in Bowling Green decided that logging his factor infusions was tedious, he took matters into his own hands: He developed an iPhone application called Hemolog.

The communications studies major, who has moderate hemophilia A, remembers the moment he had his brainstorm. “I was sitting at home, going through my logs and wondering, ‘What am I doing with these?’” he says. “They aren’t helping me with anything, and they really should be.”

The logs were spreadsheets Schultz’s mother made on the computer, which he filled out whenever he had a bleed. The system struck him as archaic. “With all this technology we have, I can’t believe this is the way that most people still do this.”

A year ago, Schultz took action. He designed the first version of “Hemolog” himself, then enlisted the help of more experienced application developers. He predicts the application will be ready this summer. 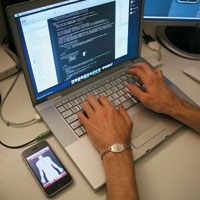 The new application offers several advantages over paper or even computerized logging systems, Schultz says. With a Hemolog application on your iPhone (smartphone), iPod Touch (portable media player and personal digital assistant) or iPad (tablet computer), he says, your log is always with you and can also easily be e-mailed to your hemophilia treatment center.

Hemolog also standardizes entries. “One of the problems is that every time I had a bleed somewhere, I would name that area something different,” Schultz says. “One time I’d say, ‘right leg.’ Another time I might say, ‘right thigh.’” Hemolog will allow users to simply touch a location on a map of the body. The application walks users through the logging process and automatically fills in some information. Most importantly, Hemolog will allow users to filter their data. For example, they will be able to instantly create lists of every bleed in a particular joint.