Shai,* now 8 years old, had been receiving almost-daily infusions of factor since he was diagnosed with an inhibitor at 10 months old. But after his port was infected with antibiotic-resistant bacteria, Shai, who has severe hemophilia A, spent 10 days receiving intravenous antibiotics that irritated the small veins in his arms. That, combined with the multiple sticks he was getting each day, upset him. When he returned home without a port and still needed infusions, Shai became convinced that anything administered the same way as the antibiotic would feel the same.

Shai, who lives in Cambridge, Massachusetts, had been anxious about needles before. But as his parents prepared to transition him away from his port, he began to hide his arms at infusion time.

“First it was, ‘I don’t want to,’” recalls his mother, Ziva Mann, 35. Then when it became clear he would have to receive his infusion, Shai would cry, scream and refuse to come into the room. “We both knew that if he’s not helping and holding still, I was not going to get in that tiny vein,” Ziva says. She is a stay-at-home mom and the author of a children’s book, Just a Boy, about a young boy with hemophilia who’s afraid of needles. Sponsored by Shire, the book is available free to families (see “Learn More” section). 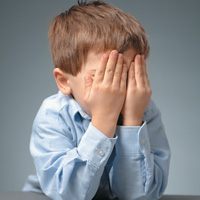 To address Shai’s new fear of needles, his mother reached out to her hemophilia treatment center (HTC) and others to identify ways to help her son. While his fear has lessened, it still flares up from time to time.

About one in 10 children nationwide is so afraid of ­needles that it is debilitating, says Heather Huszti, PhD, a pediatric psychologist at the Children’s Hospital of Orange County Hemophilia Treatment Center in Orange, California. The numbers are about the same for children with hemophilia. While not all kids with bleeding disorders are overwhelmed by their fear, many are anxious about needles or the infusion process. However, most will allow their parents to access their veins, she says.

There are steps that parents and children with bleeding disorders can take to overcome needle phobia. “It’s a matter of retraining a child to think differently about the fear involved and identifying coping skills that can be used to help the child move past it,” says Jennifer Buttell, MSW, LCSW, a social worker at the Louisiana Comprehensive Hemophilia Care Center at Tulane University in New Orleans.

While the anticipation of infusions may be a psychological issue, the discomfort of needle sticks is a physical one, says Guy Young, MD, director of the Hemostasis and Thrombosis Center at Childrens Hospital Los Angeles.

Our bodies are laced with fine networks of veins and nerves. Every time a needle punctures the skin, it stimulates the nerves. Excess stimulation leads to pain. If a child doesn’t sit still during an infusion, or if a parent accidentally misses a vein, factor can be injected into the soft tissue surrounding the vein. The pressure of liquid in a small space can then cause tissue and nerve damage. The good news, however, is that long-term nerve damage is almost unheard of, says Young. “There’s always going to be some pain involved with a needle injection,” he says. “Once the needle is in correctly, it shouldn’t hurt anymore.”

“For a child, something sharp pointing at them is threatening. If they’re in a very bright room, the tension in the environment can cause stress as well,” says Elizabeth Fung, MSW, PhD, a social worker at Children’s Memorial Hospital in Chicago. Fung has done research on techniques that reduce needle anxiety in children. 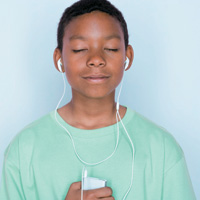 Experts recommend you prepare for success. For example, before your child infuses, make sure he’s well hydrated and, if possible, have him take a shower. Both will make veins easier to find—hydrating plumps veins and the warmth of showering or bathing dilates them, says Hope Woodcock, RN, of the UHSH Blood Disorder Center at UHS Wilson Hospital in Johnson City, New York.

Next, choose a quiet room with muted lighting, Fung says. Speak softly and soothingly. Encourage your child to look away from the needle during infusions.

“Pain is what you perceive it to be,” says Huszti. “So telling a child he isn’t feeling pain is not helpful.” Even using the word “pain” creates anticipation of it and may increase it, she says. So choose your words carefully. Use “discomfort” instead of “pain”; instead of “burning,” try calling it “warmth.”

“You’re helping the brain send a different signal—that you’re OK, that this is something you can cope with,” Huszti says. Your mind will recall that you’ve done this before and you got through it. But don’t lie to your child, she says. If you tell him it won’t hurt, the pain will be a shock and he will feel betrayed.

Sometimes what a child needs more than anything is an example that needle sticks aren’t scary. Woodcock, who volunteers at two summer camps for children with bleeding disorders in upstate New York, allows younger campers to watch their older counselors access their own veins.

Try letting your child stick you with a clean needle. Ziva remembers her infusion specialist telling her, “Trade him a stick for a stick.” “It made an enormous difference for Shai,” she says.

When your child sees you handle it well, he will feel encouraged. A few years later, when Ziva, who has mild hemophilia A, fell down a flight of stairs and needed infusions, Shai wielded the needle. “He did them all—with a huge grin,” she recalls. “He did a really good job.”

Hand Over the Reins

Sometimes children aren’t as afraid of the needle as they are that their bodies aren’t under their control. Let your child make some choices without allowing him to decide not to infuse at all, Fung says. “The more the child can be in charge, the better the whole process is and the faster it goes.”

For instance, Shai brings his own tourniquet with him when he needs blood drawn. The familiarity calms him. Let your child choose where he wants to sit for infusions or what arm or hand to use for the needle, Fung suggests.

For some kids, going slowly and practicing relaxation techniques when they start to feel afraid is the way to go. (See sidebar, “Ease Into Infusion.”) This “desensitization” works by slowly easing a child’s anxiety about each element of the infusion process and encouraging him to relax along the way. The child goes from feeling fear of the entire infusion process to being able to pinpoint what scares him—the needles, the lack of control, the sitting still or something else.

Start by asking your child to imagine each step—from taking out the bottle of factor to arranging the supplies on the table to wrapping the tourniquet around his arm. At each point, ask him how he’s doing. “I ask what their level of anxiety is,” Huszti says. “If it’s a six, then we work on techniques that will get it down to a two.”

When your child relaxes into infusions, it makes all the work worth it, Ziva says. “Infusions have gone from a battleground to something peaceful. Now he’s stepping up to take charge of his infusions. That’s paving the way for his hand to be on the needle sometime in the future.”

*Shai’s parents asked that his last name not be used.

• Ask your local HTC about treatment and relaxation techniques for your child’s needle and infusion fears.

• Find Just a Boy by Ziva Mann at KelleyCom.com.

“Young children are very tuned in to the senses,” says Heather Huszti, PhD, a pediatric psychologist at Children’s Hospital of Orange County in Orange, California. “Anything with flashing lights, bubbles, music or soft touch, like a favorite stuffed animal he gets to hold only during infusions, can alleviate anxiety.”

Making a behavior reward and adherence chart to earn points can work, says Elizabeth Fung, MSW, PhD, a social worker at Children’s Memorial Hospital in Chicago. The incentives don’t have to be financial. Instead, offer visits to a beloved relative or extra playtime.

Breathing techniques work at almost every age. For older children emphasize breathing out more slowly than in, which can slow a racing heart and calm the nerves.

Reading and creating stories are fun and distract from worry.

When your child is older, try relaxation techniques such as guided imagery, in which he breathes slowly and recalls a special memory.

This technique can make the hand or arm feel numb. Huszti first lulls a child into a relaxed state and suggests that the site of the blood draw is experiencing less sensation. Then she rubs each finger, suggesting the glove will numb the hand without trouble.

To learn how to use these techniques with your children, talk to your HTC staff.