All marriages come with challenges—especially once children enter the picture. When a child has a bleeding disorder, those challenges can be compounded by fear, uncertainty, financial strain and medical demands. Still, many parents of children with hemophilia have overcome such hurdles to forge happy, healthy relationships.

Rita and Ray Gonzales are one such couple. Married for 26 years, the Houston, Texas, residents have four children, two of whom have severe hemophilia A. Though they have a strong, loving marriage, they’ve had their share of conflicts.

Rita, a National Hemophilia Foundation (NHF) board member, has always been a leader. When she was 17, her mother passed away, and she was thrust into managing the household and making decisions for her four younger siblings. When her second-born was diagnosed with hemophilia, she naturally took charge. “I didn’t include my husband on anything because it was in my nature to make decisions on my own,” she recalls. “When he did try to get involved, I would respond, ‘Oh, don’t worry I can take care of it.’”

This dynamic worked for a while, until their third child came along. Rita felt resentful because she was handling everything herself, often hurling such accusations as, “Why aren’t you helping me?” at her husband. “Well, poor thing, I had trained him to not help me,” she admits.

What's your best advice for partners parenting a child with a bleeding disorder?
Share your thoughts in the comments section below.

The Gonzales’ experience is common among parents who have a child with a chronic disorder. “Typically, moms begin taking over the care of the child because they’re the ones with more contact,” says Edward J. Kuebler, LMSW, ACP, social worker at the Gulf States Hemophilia and Thrombophilia Center in Houston, and NHF First Step Task Force member. But that arrangement can backfire.

“Unless fathers are really involved early on, they end up taking a secondary role in caring for their child,” Kuebler says. “Then the mother begins to feel overwhelmed.”

For parents new to hemophilia, the stress and fear can be frightening as they learn to cope with the disease. “When one parent is responsible, then when a bleed happens, it’s something that happened on their watch,” Kuebler explains. “That constant pressure builds up resentment.” Couples also resolve their issues better when they’re both involved with the child’s care because there’s less misunderstanding.

Still, it can be difficult for spouses to abandon their sense of typical gender roles. Joe Caronna, a board member of the Hemophilia Association of New Jersey, has developed educational and support programs to improve effective communication in families affected by a bleeding disorder through his nonprofit company, Inalex Communications. He has seen his share of fathers who refuse to do what they call “women’s work.” The Ridgewood, New Jersey, father of a 14-year-old son with severe hemophilia A, says, “I tell them, forget male/female roles. A partner is a partner is a partner, with each of you giving equally to anything that’s needed for the family.”

Even when both parents share in the responsibility for their child, they may have different emotional responses to their child’s disorder, which can cause conflict. Julie Doar-Sinkfield, who lives in Washington, DC, has a 14-year-old son with hemophilia, Hunter, by her first marriage and two young unaffected daughters with her second husband. Though she stresses that her husband takes equal responsibility for her son, including mixing the factor and infusing him, she realizes that she is more sensitive about the disease than he is. “Since Hunter almost died from a bleed when he was born, it’s a huge, life-threatening thing that sits on my shoulder all the time,” Doar-Sinkfield says. “In every other way my husband is Hunter’s father, but I don’t think that he takes the disease that much to heart.”

The Value of Education and Support

The guilt that parents experience over their child’s inherited disorder and the sense of grief they feel when the child is first diagnosed can be bewildering. The need for information and support is crucial. 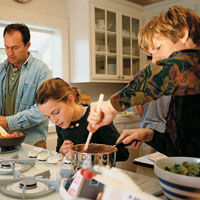 “It’s very important for parents to begin the process of working through their grief so that they can raise their child with a can-do attitude,” says Danna W. Merritt, MSW, LMSW, a social worker for the hemophilia treatment center at Children’s Hospital of Michigan in Detroit. “If they don’t process that, they will respond to their child from a guilt perspective, which does not do the child, or the marriage, any good.” She emphasizes the value of parenting classes. “They can be one of the biggest lifesavers for a couple.”

NHF’s First Step Program helps parents of newly diagnosed children understand how a bleeding disorder affects the entire family through training, peer networking, mentoring and support. “First Step provides an opportunity for parents to learn and not to feel so isolated. It helps normalize the disease, which can greatly reduce that initial fear,” says Merritt. She points out that parents who take part in First Step feel much less isolated, more confident, and are better able to advocate for their child and to hear what their medical team says to them.

Merritt also advises enrolling in a treatment center and making use of the local chapter to become better educated and receive support from professionals and other parents. “We realized we needed some skills to help us move to a better place,” says Caronna. “Our anxiety and fear really started to disappear once we talked to other parents and to each other.”

The Power of Teamwork

If her marriage was going to be a true partnership, Rita realized that she had to begin relinquishing some of her authority. She started by alternating trips to the emergency room with her husband. “I had to teach him how to do infusions, ask questions, handle insurance issues and deal with the hemophilia in general. I had to learn to let go, and he had to learn to become incorporated into that world,” she says.

“When a couple enters into a marriage as a team, then they’re working for the same goal and there’s a lot less conflict,” says Merritt. It models a loving relationship, she says. Even though Doar-Sinkfield’s husband travels on business frequently, they stay connected. “We are building our retirement together, planning dates every week together, taking the kids out together,” she says. “We’ve created our lives to reinforce that we are a team.”

“When it comes to financial issues, like insurance, teamwork is vital,” Kuebler says. Because of the magnitude and the time-consuming nature of the issue, he says it’s important to not let it fall on one person’s shoulders. Couples need to talk about finances in a calm, supportive manner. “How they handle that together will make a difference in how they function as a couple,” Kuebler says.

Discipline also requires a united front. “One of the biggest conflicts for parents of a child with hemophilia is over how much freedom to give their child,” says Merritt. They need to find a way to come to terms with their disagreements and find a compromise. “If a child knows he can go to Dad if Mom says no, he’ll play one against the other, which sets up a really destructive pattern.” She stresses the need for parents to back up each other when issues arise. “You can hammer out your disagreement in the bedroom or argue it out in the kitchen over coffee—but don’t do it in front of the kids.”

Having a united front is especially important when it comes to infusing. If the child knows that one parent is more lenient about infusions, he may communicate bleeds only to that parent. “Children need to know that infusing is a non-negotiable event,” says Merritt.

The measure of a couple’s success is how well they communicate. “Parents’ relationships break down when their communication breaks down,” Merritt cautions. That not only means talking about the big stuff, but about the little stuff, too.

“When my husband’s away we talk every day, as well as sending e-mails and text messages,” says Doar-Sinkfield. “We stay connected to each other all the time.”

Kuebler recommends that couples build in time together daily or at least once a week, even if it’s at the end of the day when they’re getting ready for bed. Some of this time should be spent communicating about topics other than hemophilia. Couples need to work at not letting the child’s bleeding disorder dominate their discussion.

All family members also need a forum to communicate. “We play something called ‘high/low,’” says Caronna. “Everyone talks about their high for the day and their low for the day. This creates a platform for sharing, for venting, for celebrating.”

It’s also essential to have regular family meetings and engage in activities together. “Watch a movie together or sit and color with kids,” Kuebler suggests. These activities connect the children with the family and help the family bond.

Even during the rockiest times, the Gonzaleses knew that giving up on the marriage was not an option. “We had a commitment to each other, and were determined to make it work.” Rita attests to the power of working through life’s challenges. “When you resolve those critical issues in a marriage, then you’re able to handle other challenges that come up in your life and in your child’s life,” she says. “You also show your child how to handle challenges.”