See Letter to the Editor in response to this article.

As a toddler, Andrew Morado experienced many bleeds in his left ankle due to his severe hemophilia A. But at age 4, when he started a three-day-a-week prophylaxis regimen, the bleeds subsided and so did the attentiveness of his mother, Alicia. No longer was she constantly monitoring his gait and sizing up his ankles for the slightest sign of pain or swelling that might indicate a joint bleed.

“For the most part, he was in really great shape because of the prophy,” says Alicia. Andrew has two brothers, one who has mild hemophilia and one who is not affected.

Andrew, now 15, is an active sophomore in high school. In the winter of 2009, Alicia noticed his right elbow was very stiff and swollen a few days after he slipped and fell in their Joliet, Illinois, driveway. She can’t recall whether he infused immediately after the fall. It wasn’t a priority, she says, because she figured his regular infusions would take care of any bleeding. “At the time I didn’t think it would be a recurring thing,” she recalls. She thought: “It will swell, we’ll treat him, it’ll go away.”

But the damage was serious enough that Andrew experienced repeated bleeds in his elbow. “The family’s focus has changed. “Before, we were concerned about his ankles. Now, it’s a different joint. I’m not really sure what to look for a lot of times,” Alicia says.

The Morados are part of the generation of families that has benefited from prophylaxis. However, for many of them, joint bleeds are so infrequent, they may not recognize them. Or, they may not know how to treat them properly when they do occur.

“One of the things that is wonderful about the prophylaxis is it decreases the anxiety or the likelihood of having a spontaneous joint bleed,” says Carol Diamond, MD, a pediatric hematologist and oncologist at the University of Wisconsin Hospital in Madison. “But the other part of it is if somebody has never had a joint bleed, he is not as vigilant.”

Susan Hunter, RN, the senior hemophilia clinical nurse at University Hospitals of Cleveland, says that occasionally a parent of a school-age child will call her and say, “I don’t know what this is.” “If the child has been on prophy, he may not have had a knee bleed. The family is not familiar with the treatment or the follow-up,” she says.

Because joint bleeds can lead to permanent damage, parents and kids should know the signs and what to do next. 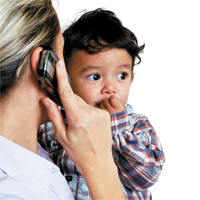 Oscar Abrahams/Glow ImagesThe most common sites for joint bleeds are the knees, elbows or ankles; less often, the shoulders or hips. Bleeds can happen as a result of trauma, but they also frequently occur spontaneously. The joint and surrounding area become swollen, which can result in irritation or pain. “Often people will complain of a sensation of heat and bubbling,” Diamond says. “They will not want to move the joint.”

Bleeds into the joint cavity can cause synovitis. Iron in the blood irritates the synovium, the tissue that lines the joint. When damaged, the synovium becomes inflamed and thickened, and has increased blood flow. This makes the joint incapable of normal function, explains Diamond. The synovial lining is fragile and at higher risk of repeated bleeding. “Once you have one joint bleed, you’re very likely to have another one,” says Diamond. Target joints are those that have had repeated bleeds, or at least four bleeds within six months.

By the time a joint bleed causes pain, decreased range of motion and obvious swelling, it’s likely the damage has already occurred. That’s why it’s important to notice subtler signs. Infants rarely get joint bleeds because they aren’t mobile yet. Parents of toddlers should look for changes in function. 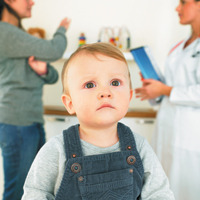 “Toddlers with a bleed will limp or refuse to bear weight, or they won’t want to get up,” says Diamond. “Or, they’ll hold their knee or their ankle where it hurts.” Any change in the way a child walks or unwillingness to use or bend a limb should be taken seriously and addressed immediately, she says.

Hunter suggests that parents with small children routinely compare joints during bathtime or diaper changing. “Sometimes one leg does look different than the other.” If that happens, she says, make a small ink mark on the suspect area and measure the circumference with measuring tape. Measure it again after a few hours—the time should be determined by your doctor, nurse or treatment plan—to see whether the size has changed.

Sometimes, it’s simply a matter of noticing that your child is acting out of character. “There might be no signs of illness, but maybe he’s uncomfortable,” says Joann Deutsche, RN, FNP-C. As a family nurse practitioner at the Hemophilia Center at Oregon Health and Sciences University in Portland, she has fielded calls from plenty of worried parents. “It’s very hard for parents initially, but they have to be alert. We don’t want them to wait to come in until after the joint is terribly swollen.”

The signs may vary even among siblings, says Deutsche. “Parents have to be really keyed into their child,” she says. “They really are the baby’s eyes and ears.”

Wendy Dean’s son, Cole, 2, has severe hemophilia A. The family from Charleston, South Carolina, has already had several scares, including a muscle bleed after a round of immunizations, that resulted in calls to their hemophilia treatment center (HTC) at MUSC Children’s Hospital in Charleston. Wendy, who considers herself well informed in recognizing bleeds, has advice for other parents: “If you think something’s wrong with how your child’s acting, sit down and take a look.” 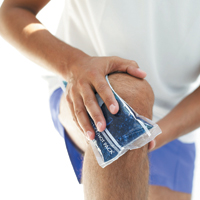 If Wendy sees something amiss, she’ll give Cole a dose of factor. But less experienced parents should call their HTC first, says Diamond. “Call any hour of the day or night. That’s why we have 24-hour services,” she says. “Whatever we can do to minimize joint bleeding is the best thing for the child.” Joint bleeds that aren’t treated quickly could lead to frozen joints, which can’t fully flex or extend.

Hunter says too often parents watch the joint for a day or two and then call the HTC. “We nurses would like to see a big campaign: Make the Call,” she says. Because time matters, Hunter advises families to carry at least one dose of factor with them at all times and follow the manufacturer’s storage guidelines for the medication when traveling. Ask your HTC about travel cases for factor. If a family’s headed for a daylong event, such as a picnic or family reunion, Hunter advises administering a preventive dose of factor before leaving home.

When a joint bleed happens, infusing with factor isn’t enough. To prevent joint bleeds from recurring, stick to the RICE treatment plan—Rest, Ice, Compression, Elevation. RICE is crucial in the 24 to 48 hours after infusion, Hunter says.

Rest involves staying off the joint for at least a day, depending on how severe the bleed is, then slowly returning to activities. Older children and teenagers tend to re-bleed because they’re up and moving too soon after they treat. “The more you bleed, the more likely you’re going to bleed,” Hunter says. “It becomes a very vicious cycle, and the healing takes longer. You end up needing more and more factor.”

Ice means applying a cold compress for 15 minutes, every couple of hours, to reduce swelling.

Compression involves wrapping the joint in an Ace™ wrap. Make sure you’ve been taught by the staff at your HTC on the proper wrapping technique so the bandage doesn’t constrict the limb. “The compression helps reduce the bleed,” Hunter explains. “It also can serve as a reminder to the child to be careful of that joint.”

HTCs may give older kids a Cryo Cuff,® a gravity-driven type of icepack that gradually provides ice and compression to the joint, minimizing the need to change wraps and ice packs.

Elevation can be as simple as using pillows to prop up the joint above the rest of the body. This keeps the blood flowing away from the joint, and reduces swelling and discomfort.

Diamond highly recommends swimming because it builds strength and endurance. Besides, it is easy on the joints. “Being strong and active, having good nutrition, and avoiding obesity are extremely helpful for hemophilia patients,” says Diamond. 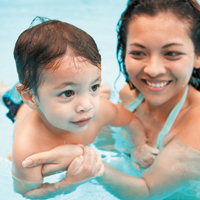 Active children with hemophilia tend to have stronger muscles and connective tissue than their counterparts who don’t exercise regularly, according to a November 2009 study published in the journal Pediatrics. The study was conducted by Marilyn Manco-Johnson, MD, and colleagues at the Mountain States Regional Hemophilia and Thrombosis Center at the University of Colorado in Denver.

The researchers found that some higher-impact sports may be beneficial for children with severe hemophilia with the proper protective gear. They found that the impact from playing basketball and baseball, as well as running, actually helped move calcium through the bones to build up bone density. Target joint bleeds were no more common than in children who swam and cycled. (See “Jump Start,” HemAware Spring 2010.) It’s still important, though, to talk with your HTC team if you are considering allowing your child to play a high-contact sport.

After a bleed, parents may want to try to protect their children from everything in sight. “We don’t want our children with hemophilia to be couch potatoes,” Diamond says. “Early on, you can start talking about sports that are safe and encourage your child to participate in them.”

Now that Andrew is an active teenager, Alicia worries that he doesn’t pay attention to the signs that he’s having a bleed. “Sometimes it’s not a big deal to him unless it’s stopping him from doing the things he wants to do,” she says.

Andrew’s elbow is still giving him trouble, so Alicia often finds herself spot-checking for signs of swelling. She has been imploring Andrew to infuse as soon as he feels the telltale bubbling and tingling in his joints. “I’m trying to get him to be more diligent, because when he gets older, that’s when the problems are going to manifest the most. He thinks because he’s 15, he’s OK, but he’s got to think of the future.”