Despite hemophilia’s very visible symptoms—bleeding and bruising—the disorder has been a hidden one for a long time. But the 2010 debut of the documentary Bad Blood: A Cautionary Tale and the second season of USA Network’s popular television show Royal Pains are helping move hemophilia from the shadows into the spotlight.

For the National Hemophilia Foundation (NHF), the public exposure is welcome. “We want to be part of mainstream media,” says Val D. Bias, NHF CEO. “Anything that brings more visibility to the foundation and what we’re trying to do helps our agenda.”

“I came to this story through my friend Matthew Kleiner,” says Marilyn Ness, the director, producer and writer of Bad Blood. She is also founder of its production company, Necessary Films. The two families were friends in Brooklyn, where the children grew up knowing Kleiner had hemophilia. What Ness didn’t know was that Kleiner later contracted HIV through contaminated blood products he infused to manage his hemophilia. Once he revealed his diagnosis to Ness in the late 1990s, they both realized the need to tell the story of how 10,000 people with hemophilia were infected with the virus as a result of unsafe blood products. “He understood, I think more than I did at the time, that there were still so many lessons that needed to be learned from this time and from this tragedy,” Ness says.

So began Ness’s decade-long journey creating Bad Blood, which premiered in July 2010 at the Tribeca Cinemas in Manhattan. Told through the voices of people in the bleeding disorders community who experienced the HIV/AIDS epidemic, followed by the hepatitis C epidemic, the documentary exposes the devastation wrought by negligence and shows how the community banded together to push for blood safety reform.

“It’s an important piece of history that needs to be put in its appropriate place,” says Bias. That place is not in some dusty history book, but in the public arena. The documentary’s completion was more timely than Ness anticipated: “I joke that I worked on this film for 10 years and it became a current event when I finished it.” She is referring to the recent push to lift the decades-old ban on blood donation from men who have had sex with men. Nathan Schaefer, public policy director for the Gay Men’s Health Crisis (GMHC), one of the organizations advocating for revision of the ban, met Ness at a party. What followed was a private screening of the film and then a discussion between his organization and representatives of NHF, the World Federation of Hemophilia and the Committee of Ten Thousand.

“As an HIV service provider and prevention advocacy organization, we have always been concerned about the needs of all people living with and at risk of HIV,” says Schaefer. “Through the film and through the substantive conversations, we became even more concerned about the blood product end-users’ concerns about any reform.” 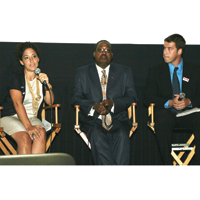 With a new generation of gay men wanting to donate blood, the film can serve as a training tool. “Where this is useful for the gay community is that we have to educate young people about the history of the HIV epidemic, and particularly about the history of blood safety,” Schaefer says.

Although documentaries do not usually have a call to action, Bad Blood does convey the sense that impassioned people can make a difference. “No matter how sick they were or who in their family had just passed away, they just kept fighting to change the system that was broken,” says Ness. That fight led to the passage of the Ricky Ray Hemophilia Relief Fund Act (1998), legislation to monetarily compensate individuals or the families of loved ones who received contaminated factor, and to the extension of the Ryan White Care Act, which provides medical care to people with AIDS. It also ensured the creation of government committees, such as the Food and Drug Administration’s Blood Advisory Board, to oversee blood safety and include consumers and nonprofits at the table. “That is the message that can continue to live on for this community—to be an example to the wider world,” Ness says.

A portion of the wider world saw the film during its three city premieres in 2010: in New York, San Francisco and Washington, DC. The audience will be expanded when the documentary airs on PBS this spring. Further, each of NHF’s chapters received a copy of the documentary for local showings. Chapters are being encouraged to invite diverse members of their community to see it. “The value of having a mixed audience—people from our community who lived it or lost loved ones, along with a healthy mix of folks from the general public—with a panel discussion that follows, is that it articulates not only what happened, but what we can do with that information,” Bias says.

Ness believes the marching orders for the general public are clear: advocate for reform of the FDA. “The lesson that wasn’t learned by the public at large is that there really needs to be a change in the way the FDA regulates pharmaceuticals,” specifically blood products, she says.

The pilot for the medical TV show Royal Pains aired in June 2009. The show is set in the Hamptons on Long Island, New York. Hank Lawson is a concierge doctor who makes house calls to the rich and famous. In the pilot, viewers were introduced to Tucker Bryant, a teenager with hemophilia, played by the actor Ezra Miller. Since then, the show’s producers have noticed a spike in audience numbers when Tucker appears.

“Tucker’s been one of our most popular characters. Viewers request to see him all the time,” says Andrew Lenchewski, Royal Pains creator and co-executive producer. “He’s definitely a fan favorite.”
See the clip of Dr. Hank Lawson discovering Tucker has hemophilia:

“I thought of all these kids that we did oral surgery on or who needed surgery for other problems with hemophilia,” says Enrique Lenchewski, DDS, with Metropolitan Oral Surgery Associates, PC, in Manhattan. “I thought this could be an interesting situation from the point of view of Hank, the doctor, coming up with a diagnosis and a treatment.”

Although Tucker may seem to have it all—a fancy sports car, a mansion in the Hamptons and a pretty girlfriend—he also wrestles with everyday issues. “In the writers’ room in Los Angeles, we’ve talked a lot about what Tucker’s mixed feelings might be about playing contact sports, for instance,” says Andrew. During one episode Tucker gets mad, breaking a bottle against a tree and cutting himself. “It was less about that impulsive reaction of angrily smashing the bottle and more about this complicated disorder where you even have to control your own emotions because they could be dangerous.”

The character is relevant to the bleeding disorders community today. “I think it’s always tremendous to have someone articulate and actualize your existence when you’re a teenager,” says Bias, who has hemophilia. “Tucker has some challenges in his life, some of which revolve around his hemophilia.” Those struggles make him more human, Bias says.

Royal Pains’ medical consultant, Irving Danesh, MD, landed his role at a wedding he and the Lenchewskis attended. “When we had the first conversations, Andrew said he wanted to keep the medicine as real as possible,” says Danesh, associate chief of emergency medicine at Lawrence General Hospital in Massachusetts. To achieve that, Danesh oversees the show’s medical research and is on the set during production.

Patients with hemophilia left an impression on Danesh during his residency 20 years ago in the emergency room at Thomas Jefferson University Hospital in Philadelphia. “The patients used to carry around their own meds in a USP box, and it actually came with its own IV equipment in the kit,” he says.

That experience helped Danesh fashion the packaging for Tucker’s factor product. After the car crash, Tucker experienced bleeding into the pericardium, a membranous sac surrounding the heart. Hank told Libby, Tucker’s girlfriend, to run up to his bedroom and get his kit. “We tried to make it as authentic as possible,” says Danesh. “We had a bottle and a label I had printed from the Internet. We had the IV tubing.”

Hank then quickly infused the factor VIII into Tucker. This is where the audience had to accept that TV time is contracted time. “Hank sliced into Tucker’s chest 3 seconds later. My guess is that it doesn’t work that fast, but they wouldn’t allow us a half hour. I’m sorry, it wasn’t my fault,” Danesh says with a chuckle.

“Dr. Danesh has not only this encyclopedic knowledge of medicine, but he’s also insanely creative, so he invented the show’s ’MacGyver’ approach,” Andrew says. MacGyvers are quick-thinking solutions named for the main character of a 1985–1992 television show who used common household objects to solve a wide range of problems.

Tucker’s chest operation was one of the show’s first MacGyvers. Hank had no surgical tools to work with, so he had to improvise. “I think the line went, ‘Get me the bottle of vodka, a box cutter, a pen, some duct tape and a plastic bag,’” says Danesh. The vodka sterilized the chest wound, the box cutter “did the dirty deed,” says Danesh, and the pen served as a drain. “The factor VIII was working, because it stopped the bleeding. So then we put the plastic bag over that to keep it clean and used some duct tape to wrap up the chest like a Christmas present.” 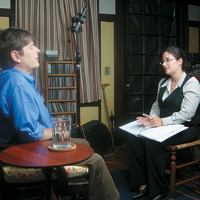 Tucker was then airlifted to a hospital in New York City and returned to the Hamptons a week later with barely a scar, Danesh says. “In reality, Tucker probably wouldn’t have survived that crash. But he is a good kid, and we wanted to keep him around. By the grace of God and Hank, we saved Tucker.”

Although Tucker’s character was never meant to be a role model for teens with hemophilia, he does portray a person with a full life. “I hope that people realize that these patients can have a normal lifestyle,” says Enrique. Through the character of Tucker on Royal Pains, he hopes hemophilia will move from the category of forgotten diseases to familiar ones.

Tucker is actively engaged in life, but within reason. “He goes to parties and has a girlfriend, but at the same time, he’s extremely conscious of his hemophilia and responsible about managing it,” says Andrew.