Adoption experiences in the bleeding disorders community are as rich and varied as the families themselves. Some parents affected by a bleeding disorder choose adoption to ensure they do not pass on the gene that carries the disorder. Others learn only after adopting an infant that he or she is affected. And still others seek out a child in need with hemophilia because they know they can provide the best care and environment for him.

According to Danna Merritt, MSW, social work coordinator at the Children’s Hospital of Michigan in Detroit, these days fewer carriers are choosing adoption to ensure an unaffected child, thanks to the improved health and lifespan of people with hemophilia and advances in preimplantation genetic diagnosis—testing in vitro–fertilized embryos for genetic defects before implantation.

But many carriers still choose adoption, especially when there are special health concerns, like those of Shelley Gerson, 40, of Bloomfield, Michigan. Shelley has the rare female form of hemophilia and contracted HIV in the early 1980s when she was 14, before blood products were adequately screened for the virus. She and her husband never considered having a biological child, she says.

“It was always my dream to have children, but being pregnant just wasn’t that important to us. In childbirth there is so much bleeding involved, and with my hemophilia, that worried my husband a lot. Plus, carrying a child is so hard on the joints. I didn’t want to risk becoming disabled,” says Shelley.

In 2002, after being married for 11 years, the Gersons felt ready to begin what they thought would be a lengthy process to adopt a child. “Because of my HIV, we weren’t going to be considered for international adoption, so we decided to go the foster care route.” They asked for a child of any age between newborn and five years, as long as he or she was eligible for adoption. Three months later, shortly after completing the licensing process, they were surprised to learn that a week-old baby girl was ready for them. “I got the call at work, and that afternoon I went to Target to get all the baby things we needed, and then straight to the hospital to pick her up,” laughs Shelley, still amazed at how instantaneous motherhood—in the form of baby Maddie—was for her.

When Maddie was 13 months old, the Gersons’ social worker called again with a proposal: Maddie’s biological mother had given birth again. In the interest of keeping siblings together, Shelley’s family was offered the chance to adopt Maddie’s brother Eli. He quickly joined the family, and, like Maddie, was legally adopted. “It was like raising twins,” says Shelley. But as difficult as that may have been, she and her husband kept their foster license open. “Call it women’s intuition—I still felt we weren’t done.” Sure enough, in May 2007, Shelley got another call: Maddie and Eli’s biological mother had given birth again, and Isaac joined the family.

“I think we are done now,” says Shelley, whose days are full caring for two preschoolers and a seven-month-old. “They know they all came from the same ‘tummy mommy,’ and that we are their ‘forever mommy and daddy.’ I have lost a lot of friends in the hemophilia community, and my father and brother died from the disease. It may sound funny, but I feel like I had this whole crew of friends and family in heaven who picked these babies out for us.”

Shelley’s health remains excellent, she reports. Her HIV load is undetectable, and even the arthritis pain that plagued her for most of her life has almost disappeared since the children came into her life. “My body knows I just don’t have time to be sick,” she says.

Adoptive parents worry about unknown health problems they may be taking on with a child from another birth family. Medical histories are not always available from agencies. “You also have no control over what the mother is doing while pregnant, and that is scary for a lot of people,” says Shelley. Maddie has delays in speech and learning, but Shelley reasons that any child, adopted or biological, can have unforeseen health issues.

Merritt has observed that adoptive parents are uniquely resilient when dealing with unexpected outcomes. “They wouldn’t be adopting if they weren’t people who step up and go after things,” she says.

This was the experience for Chris and Lisa, a New Jersey couple who prefer to remain anonymous to ensure the privacy of their closed adoption. Their son, adopted as a newborn, was diagnosed with hemophilia at 10 months old. “Our first response was shock, and our second was, ‘what do we do now?’” remembers Lisa. “Although we were upset, we got right down to the business of dealing with it.”

She says there were no feelings of anger or being cheated, nor did she and Chris experience the guilt that some biological parents feel after a genetic defect is diagnosed. “After years of infertility, we were thrilled to have him, and it has never occurred to us that he was anything but the perfect child.”

Like most parents faced with an unexpected hemophilia diagnosis, Chris and Lisa received a rapid education with the help of their hemophilia treatment center, just a short distance from their home. “We went right into classes, seminars and our peer group, where we got together with parents who have been in the community for years,” says Lisa. “People often comment how ‘lucky’ our son was to be adopted by us, but it had nothing to do with luck. I believe it was divine intervention that he was supposed to be with us. His birth family was from a small, Midwestern farming community in the middle of nowhere, four hours from the nearest treatment center.”

Their peer group has also helped them cope with raising an active little boy. “We heard parents’ stories about their boys who were taking headers off the couch,” says Chris. That helped when their son started walking—and falling—and needed to have infusions once a week. “In those early pictures, he always had a knot in the middle of his forehead,” Lisa laughs.

Now six years old, Chris and Lisa’s son receives prophylactic infusions at home three times a week. He goes to a regular day camp in the summer and participates in regular physical education class at school. “Through our support group we’d heard stories of parents who kept their kids in bubble wrap, and how those kids were at risk of becoming socially isolated, reclusive and obese,” Chris says. “We also heard from parents who encouraged activity, and that’s what we wanted to do.”

Chris and Lisa have done their part as educators, too. They arranged to meet with their son’s teachers to explain his condition, his limitations and his many capabilities. “We had about 24 teachers and administrators show up,” says Lisa. “They all wanted to learn how to work with kids like our son.”

Since their son’s records showed no family history of bleeding disorders, they wrote to the birth mother to inform her of the diagnosis. “It turns out that she had never been told she was a carrier, even though her own mother had known, and she’d had uncles with hemophilia,” says Lisa. 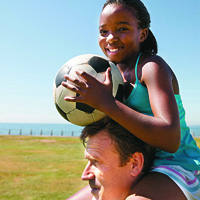 Patricia DeRatto, 51, a divorced single mother from Chesterfield, Virginia, knew exactly what she was getting into when she adopted a preteen with hemophilia five years ago. Patricia, who is a carrier, already had three biological children: Nick was 20; Rose, a carrier, was 13; and Daniel, who has severe hemophilia A, was 11. She met 10-year-old Travis at a summer camp for children with bleeding disorders that she started through her work with the United Virginia Chapter of the National Hemophilia Foundation. “Travis was a handful,” she remembers. “He was one of the whiniest, neediest kids there his first year. He never wanted to join in. I would put my arm around him and he just would roll his eyes. But the next summer, he was the first person to sign up for the camp.”

Patricia explains the bond that formed between her and Travis. “Even though I had never thought about adopting anyone, there was something about him, like he was meant to be with us, and I have felt that way ever since.” That second summer, Patricia began hearing some disturbing things about his home life. “His social worker said he was looking for a family, and she told me, ‘He seems to think you want him.’”

The DeRattos did want him. “My oldest son had worked at the camp, and singled out Travis specifically as someone he wanted to work with,” says Patricia. When Travis was 12, he joined the family and was formally adopted, changing his name to Matthew. “He wanted a fresh start, so the whole family sat down with a list of names we all liked, and that’s the one he chose,” she says.

Soon after becoming a DeRatto, and with help from his new mother, Matthew began to self-infuse for the first time. “He was thrilled about it,” says Patricia. “It can be a control issue for kids, being able to infuse when they want.”

Although Matthew has severe hemophilia A, with regular prophylaxis he is encouraged to be much more active than when he was in foster care. He thrives on it, his mother says. “Social workers want to protect these kids. He wasn’t even allowed to play a pickup game of basketball.” During his first Christmas with the DeRattos, he and his brother Daniel got roller blades, a skateboard and a ramp, along with protective gear and lessons in safety. “Neither had any more bleeds as a result, because I think the regular exercise makes them stronger,” Patricia says.

In other ways, adjusting to his new family and community was challenging for Matthew, who went into foster care at age five. “He came to us from a black urban environment and moved in with a white family in the South,” says Patricia. “The large school setting wasn’t working. He either shut down or was too social.” Matthew eventually left school and is now pursuing a GED. “He is delayed emotionally because of what he experienced in his prior life,” his mother explains. “His coping mechanisms were detrimental, but they kept him going. We are trying to get him up to speed, but he’s not ready to make major life decisions.”

Patricia and Matthew have their differences, like all teens and parents. “Matt and I have our battles, but he surprises me with how protective he is of his family,” says Patricia. “No matter how mad he is because he has to follow rules, he will be the one who is right there in a minute, making sure we are OK. And he concocts all these stories of how I could be his biological mom.”

Like other adoptive parents, Patricia says she wishes she had known more about his earlier life. “We just had the glossed-over hospital facts. But I have gotten to know his biological family well, and they have helped fill me in. I might have been more aggressive about getting going with counseling to deal with problems that didn’t manifest right away. Right now we are playing catch-up.”

For families considering adopting older children, Patricia shares this advice: “Keep an open mind, and know in your heart that they are yours. They will doubt you, and believe anything they care about can be gone in a minute. They will try you and test you to see if you will throw them out. It is scary for them to let their defenses down.”

But, like all the families profiled here, Patricia has that sense that this union was meant to be.