How to Talk to Your Doctor

Twenty-three seconds. That’s the time it took for Jesse Owens to break the world record in the 220-yard low hurdles in 1935. It’s also the average time you have to make your “opening statement” before your physician interrupts. No wonder you feel pressured and maybe a tad irritated. After all, you may have waited months for an appointment, and you need more than 1/3 of a minute to lay it all on the line.

With growing demands by insurance companies to squeeze more patients into the day, doctors have to manage their time efficiently. You can maximize your next office visit by taking steps to improve your health communication.

Actively participating in the dialogue with your doctor often ensures a more successful outcome. In a 2009 study published in the journal Arthritis Care & Research, nearly one out of five interactions between doctors and patients with advanced arthritis in their knees led to misunderstandings. Agreement was “modest to poor” on the severity of the arthritis, and the benefits and risks of total knee replacement surgery. “The fact that 18% of the doctor/patient pairs didn’t agree on whether joint replacement had been recommended is some cause for concern,” says Richard L. Street Jr., PhD, lead author of the study. He is head of the communication department at Texas A&M University in College Station.

However, when patients shared their preferences and concerns, communication improved. Patients who felt heard were more satisfied and more likely to follow doctors’ orders. “Doctors can’t read minds, though,” Street says. “Patients have to speak up.”

Wayne Cook, 48, of Latham, New York, is not afraid to speak up when it comes to his hemophilia B or dealing with heart disease, bilateral knee replacements or hernia surgery. “I am very straightforward with my doctors,” says Cook, president of the Coalition for Hemophilia B, Inc. 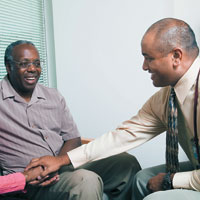 Speaking the truth to your doctor is more than a noble trait—it could save your life. When patients withhold information about their medications, they may unwittingly contribute to harmful drug interactions. Downplaying or denying your liquor consumption can be dangerous. Alcohol interferes with many prescription and over-the-counter drugs. It aggravates existing hepatitis infections and accelerates liver disease. Further, it’s important to talk about your symptoms, even those that may be embarrassing. In addition, sharing previous medical records, test and screening results, and a health history provides a more complete health picture.

Your method of communication may be just as important as your message. “Treat the healthcare team with respect,” says Barb Dittrich, mother of two daughters and a son, Charlie, 9, who has severe hemophilia A. She is executive director of Snappin’ Ministries in Oconomowoc, Wisconsin, serving children with disabilities and their families. “Being verbally abusive and nasty are counterproductive. You can be firm, but you can be decent.”

Laying the groundwork for good communication can cushion the blow when emotions run high. After a period of being housebound with Charlie’s “never-ending nosebleeds,” Barb lost it. When the doctor told her, “It’s just a nuisance,” Barb retorted, “If you were living with this, you wouldn’t think it was just a nuisance!” Then she started crying. “Because I so seldom do it, it really made the doctor take a step back,” Barb says. The doctor apologized. “That’s a testimony to the fact that your approach with these doctors is huge.”

One aspect of communication with your doctor is education. In this community, most consumers are lifelong learners when it comes to a family bleeding disorder. Some primary care physicians and specialists are not as familiar with bleeding disorders as you are, so you may have to provide a primer. “When I first started seeing my cardiologist, I always shared with him whatever information I had about my hemophilia,” Cook says.

Some patients begin health conversations with their doctors based on information from the Internet. “The doctors can then be more focused about what patients know and understand. They can either say, ‘Yes, that’s good’ or ‘There’s a bit of a misconception’ and explain it,” Street says.

Receiving health information is just as important as conveying it. To better understand your doctor, be prepared. List your questions on a notepad. At the doctor’s office, ask the most important questions first and be concise. Avoid getting so bogged down in taking notes that you curtail the discussion. “It might be better to capture just the highlights, so it doesn’t interfere with your skills as a conversationalist,” Street cautions.

Better yet, bring a companion to act as an advocate, scribe and translator. Cook’s wife has accompanied him to appointments. “It gives you a different perspective,” he says. “My wife might understand it and interpret it a little differently than I did.” The companion can also ask questions you may have forgotten and take notes for later review.

Another way to increase your understanding is to ask for literature. You may be familiar with your hemophilia, but not as knowledgeable about a new diagnosis of high blood pressure, for example. Most doctors’ waiting rooms have brochures on a variety of conditions. “I always take the materials home and read them,” says Cook.

Despite taking some of these steps, you can still leave an appointment feeling confused or frustrated. In that case, your follow-up is fundamental. It is your responsibility to call the office if you do not understand how to take your medicine or what tests you need to schedule. But don’t demand to speak with the doctor. “If there’s anything that didn’t get adequately addressed or comes to mind after, I will call the nurse,” Dittrich says. “Then I work my way up if I have to.”

The barriers to good communication include cultural norms (see “Culture Clash,” HemAware, March/April 2008), gender differences (men ask fewer questions and see doctors less frequently than do women), age and personality conflicts. Some of these have workable solutions, but others may not. Occasionally, you may need to switch providers. The top-down approach of one of his doctors did not suit Cook’s needs. “I was looking for a doctor who would listen to me and work with me. He may be the specialist, but I’m also part of the team.”

Both Dittrich and Cook describe themselves as proactive when it comes to health concerns. They participate in healthcare decisions, try to stay on top of things and share information, when appropriate. The habits they’ve established—telling the truth and being fair and firm—have paid off. “It has garnered us some respect,” says Dittrich. “When we do speak up, doctors take us seriously.”

Communicating means sharing and receiving information, working together with your doctor. Try some of these tips at your next doctor’s appointment.

Improving the Interchange: What Doctors Are Doing

In a 2008 survey of adult patients by the American Board of Medical Specialties (ABMS), 95% listed bedside manner and communication skills as more important than a doctor’s training, office location or hospital affiliation. “These survey findings confirm that patients are demanding that their doctors treat them not just with medicines and procedures, but with empathy and information that they understand,” says Kevin Weiss, MD, ABMS president and CEO.

To address these needs, medical schools are incorporating communication skills into their curricula. Among its six core competencies for quality patient care adopted in 1999, ABMS includes “interpersonal and communication skills.” Doctors are required to display good listening skills with patients and family members.

“We’re trying to teach three things that doctors need to obtain during the medical interview: gathering data—most physicians make diagnoses from talking to patients, not fancy tests; building a relationship—because if you don’t like, trust or respect the doctor, you’re less likely to comply; and educating the patient,” says Robert Arnold, MD, Leo H. Criep chair in patient care and director of the Institute for Doctor-Patient Communication at the University of Pittsburgh School of Medicine. These skills are honed in courses taken during medical school, he says. They run the gamut, from how to share bad news or admit mistakes to motivating behavior changes for healthier patient lifestyles.

Doctors can improve communication with patients through small gestures, from shaking hands and addressing patients by name to using phrases such as “tell me more.” These skills are measurable. “Researchers have shown that doctors who are more experienced and better communicators get the patient’s agenda at the beginning of the interview, ask more open-ended questions and don’t interrupt as much,” Arnold says.

That’s good news for patients. When given the chance, patients needed only six more seconds—on top of the typical 23 seconds before being interrupted by some doctors—to voice all their concerns. With more training, doctors may soon take the lead on listening.