The shoulder is a versatile joint. It allows you to swing a golf club, throw a curve ball and paint the ceiling. But the joint’s job description comes with a price. When the connective tissues or bones of the shoulder joint are overtaxed or injured, the pain can be punishing.

“I couldn’t even reach down and pick up a shirt. The pain was unbearable,” says Barry Baxter, 47, of Glassboro, New Jersey. The former paper company truck driver has severe hemophilia A. Every winter his right shoulder served as a barometer. “When it started getting cold outside, the pain would happen when I would lie down. It was so hard to just go to sleep at night.”

After six years of worsening pain, Baxter had a total shoulder replacement on his right shoulder in 2008. A year later, the left shoulder joint was replaced. “I still have some pain, but it’s the difference between night and day.”

Although pain from wear and tear prompts many people to consider shoulder surgery, for people with hemophilia, the usual causes are bleeds into the joint and arthritis. If your shoulder joints are painful, you may be a candidate for further evaluation.

The shoulder is a ball-and-socket joint. The top of the humerus, or upper arm bone, forms the ball that fits into a small socket of the shoulder blade (scapula), called the glenoid fossa. The shoulder joint is technically the glenohumeral joint.

The rotator cuff comprises a group of muscles and tendons that keep the humerus positioned properly in the glenoid and allow the shoulder to rotate. The joint is surrounded by the joint capsule. The inside of the joint capsule is lined with the synovium, a thin membrane that produces a lubricant that facilitates smooth gliding of the bones with minimal friction. Cartilage on the ends of the bones absorbs shock. It also permits movement without irritation.

Although less common than other joint bleeds, shoulder bleeds follow the same pattern. After a joint bleed, the iron component in the blood stimulates the synovial membrane to increase its network of capillaries, which makes the joint susceptible to repeat bleeds. It also breaks down the cartilage, which is not readily replaced. If enough cartilage is destroyed, the bones can rub against each other, causing severe arthritis and pain. 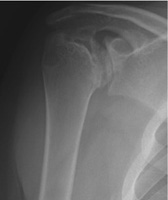 Courtesy of G. Russell Huffman
An X-ray of an arthritic right
shoulder joint shows the
irregular bone surfaces and the
limited amount of cartilage
between the bones.

Patients tend to avoid moving a painful shoulder, not realizing that disuse can lead to degradation. “If you don’t move it completely through its range of motion, certain muscles never get worked like they’re supposed to and the timing is off,” says Sharon Funk, PT, University of Colorado Denver Hemophilia and Thrombosis Center. Unworked muscles can atrophy, becoming weaker over time.

Physical therapy can stop that downward spiral, Funk says. “It’s critical to get the glenohumeral rhythm back, where the humeral head moves down in the glenoid fossa as the elbow and forearm move forward and up or out to the side,” she says. This normal rhythm allows the shoulder to move smoothly through its full range of motion. However, if the arthritis is advanced, movement may increase pain, inhibiting normal movement. “If we can get proper movement through increasing shoulder muscle strength, we may be able to relieve some painful movements,” says Funk.

The time to consult a surgeon is after conservative measures, such as rest, pain medications, cortisone injections and physical therapy, have failed. Work with the staff at your hemophilia treatment center to find a surgeon who has operated on patients with hemophilia. At the appointment, your medical history will be taken, including your history of joint bleeds. A physical examination will reveal the shoulder’s range of motion, strength and the extent of swelling and tenderness.

Imaging tests provide useful information on the condition of the bones and connective tissue. “X-rays show how much erosion has occurred around the joint in a patient with hemophilia, how misshapen the humeral head is and how much wear has occurred in the socket,” says G. Russell Huffman, MD, MPH, assistant professor of orthopedic surgery at the Hospital of the University of Pennsylvania in Philadelphia. “We almost always use a CT scan to get a three-dimensional image of the amount of bone left in the shoulder socket.” For some patients, MRIs might be ordered to determine if there’s been damage to the rotator cuff from shoulder bleeds, says Huffman.

In a total shoulder replacement, or total shoulder arthroplasty, the ball and socket are replaced with artificial parts. The prosthetic ball is typically made of cobalt chrome, a lightweight metal that is strong, resistant to wear and erosion, and virtually friction-free. It has a titanium stem that fits down into the canal of the humerus. “In most cases, a porous metal is used for the humeral component,” says Huffman. This allows new bone growth to occur, anchoring the prosthesis in place. However, if the patient’s bone is not sturdy enough, an epoxy cement is used. The new socket is made of polyethylene, a type of smooth plastic, and is cemented in place.

To access the joint, the surgeon detaches the subscapularis tendon in front of the shoulder and reattaches it after the surgery. “We take out all the inflamed tissues, the synovium and the bone that is arthritic and misshapen,” Huffman says. “We replace the bones with surfaces that are more anatomic, like the shoulder was before it became damaged.”

Most patients with hemophilia are about 20 years younger than the typical shoulder replacement patient. In a study of six men with hemophilia who underwent seven total replacement surgeries at the Mayo Clinic, published in the Journal of Shoulder and Elbow Surgery in 2010, the average age was 48.

“These patients are at a theoretical increased risk of complications from postoperative hematomas (bleeding), infection and, due to their younger age, there’s a concern for a possible need for revision surgery in the future,” says co-author John W. Sperling, MD, orthopedic surgeon at the Mayo Clinic in Rochester, Minnesota. The ball of the prosthesis holds up over time, but the socket needs replacing after about 15 years, says Huffman. However, no long-term studies have been conducted on patients with hemophilia who’ve had total shoulder replacements, he says.

Still, the surgery is successful in men with hemophilia when it is coordinated with the care of a hematologist, Sperling says. It accomplishes two main goals: pain reduction and improved function. In the 2010 Mayo Clinic study, patients reported that on a scale of 1 to 5, with 5 being extreme pain, their pain dropped from 4.8 to 1.9. “That was a significant improvement in pain,” Sperling says. Patients’ motion also improved, from half normal to two-thirds normal—the expected outcome for patients without hemophilia. Further, during the average follow-up of 13.8 years, no revisions or reoperations were required.

Patients with hemophilia are typically in the hospital for about a week. Physical therapy begins right away. “They started physical therapy the next day, when I was in the hospital, so my arm didn’t stiffen up,” Baxter says. The therapist initially uses passive motion, gently moving the arm while the patient relaxes.

Outpatient physical therapy doesn’t begin for three to four weeks post-op. During the interim period, you will probably wear a sling to immobilize the joint. You may be told not to lift anything heavier than a coffee mug for a month or more. “We usually let things quiet down in the shoulder for a few weeks. We need to let the tendon in the front of the shoulder heal,” Huffman says.

Patients should plan for about three months of physical therapy after shoulder replacement surgery, says Huffman. One rule of thumb holds true: The condition of the shoulder muscles and tendons prior to surgery determines a patient’s outcome. If they were in good shape beforehand, the rehab is minimal. If not, rehab can take longer. Regaining full strength and function may take up to one year or longer.

The physical therapy regimen includes range-of-motion exercises in all five planes, Funk says. More intensive therapy, such as the use of stretchy bands for resistance exercises and light hand weights for building muscle strength, is not recommended until at least eight to 12 weeks after surgery, she says.

Home exercises supplement the physical therapy. “I came home with a pulley I can hook to the door,” Baxter says. “I use my body weight to stretch both of my shoulders.”

“Our goal is to allow people to do functional things—to reach above shoulder height to get something out of a cabinet, to reach the back of their head, to be able to get to a back pocket or tuck a shirt in without pain,” says Huffman.

Baxter is surprised by what has been restored. “I can do most anything now,” he says. Compared to his knee replacements, he ranks the shoulder surgery higher.”It’s one of the greatest operations I had done.” Now Baxter can play with his grandsons and tinker around the house.

Although it might be tempting to test the new shoulder’s abilities, there are some restrictions. “Anything jarring would not be in the joint’s best interest,” Funk says. “A mean game of tennis, where the ball hits hard on the racket, is not recommended.” Bench-pressing heavy weights and playing contact sports are also frowned on, says Huffman.

A 2008 study published in the American Journal of Sports Medicine showed that 71% of the patients who were athletic prior to shoulder replacement surgery improved their ability to engage in their sport afterward. Their average age was 65 ½ years old. The greatest gains were made in such sports as swimming and golf. In contrast, softball players had the least favorable outcome—only two out of 10 returned to the sport.

Baxter’s shoulders no longer signal when rain or snow is forecast. He’s a witness to the wonders of shoulder replacement surgery. “If people are in a lot of pain, I would suggest getting the surgery done,” he says. “It gives you that quality of life that you used to have when you were a lot younger.”