How to Help Children Cope with their Siblings’ Bleeding Disorder

“I wish I had hemophilia.”

A statement like that may sound startling, but it’s not unusual for brothers and sisters of a child with hemophilia to say something along those lines.

Linda Casto, MSW, LCSW, program coordinator at the Columbus Children’s Hospital Hemophilia Treatment Center in Ohio has heard healthy siblings make that comment as a cry for attention. She says it’s the result of a tangled web of emotions—from jealousy to guilt—that often weaves its way through sibling relationships when one child has a chronic health condition and the other does not.

Casto says families coping with bleeding disorders share this problem with other families. “It is pretty much the same with most chronic illnesses,” she says. “You have one member of the family on which a lot of the attention is focused. If you’re not careful with that, it can cause a lot of jealousy and sibling rivalry within the family.”

How do you help your children cope with their siblings' bleeding disorders?
Share your thoughts in the comments section below.

Val Bias, camp director for Camp Hemotion, the camp of the Northern California Hemophilia chapter, gained insight into healthy siblings’ issues with bleeding disorders when the camp started including siblings two years ago.

“Siblings feel disenfranchised from the family,” Bias says. “They don’t get the same recognition as the child with the bleeding disorder.” 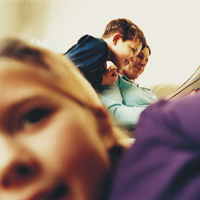 Bias remembers one camper who talked about the time she was playing in her backyard, fell, was hurt and cried out for help. Her grandmother ran to the door, thinking the injury occurred to the girl’s brother who has hemophilia. When the grandmother found out it was the sister who fell, she went back inside.

The camp environment provided this sister a chance to tell her story, and she was relieved to take a break from worrying about her brother.

[Steps for Living: Siblings of Children with Bleeding Disorders]

Elizabeth Fung, LCSW, PhD, senior social worker at the Comprehensive Hemophilia and Thrombophilia Program at Children’s Memorial Hospital in Chicago, recently completed a research study on the sibling experience in the bleeding disorders community. She wanted to find out how siblings cope when they don’t have bleeding disorders but have brothers who do.

Seventy-five siblings—male and female, ages 11 to 38—responded to Fung’s survey. It revealed several key findings, among them:

“Forty percent of the siblings felt the siblings with the bleeding disorder were treated better than they were,” Fung says.

The way brothers or sisters learn about their siblings’ bleeding disorders can also make a difference in how they adjust, according to Fung. When siblings learn about hemophilia after a traumatic event, the adjustment tends to be more difficult than when the diagnosis happens under less stressful circumstances.

Wanting Attention From Mom and Dad

Parents of children with hemophilia and other bleeding disorders often find they are spread thin. 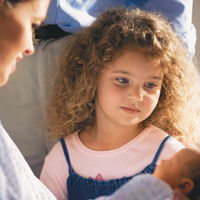 Candie McCain of Jackson, Ohio, whose oldest son Jaycee, 18, has hemophilia, says it’s inevitable that parents focus on the child with a bleeding disorder.

“There were many times that Jaycee was in the hospital throughout these past 17 years for one reason or another; sometimes it would take us away for as many as a couple of weeks. That was difficult for our other two kids,” McCain says.

She remembers that during Jaycee’s last long hospital stay, about two years ago, Kaylee told her mother that she missed her and asked why she always had to go “up there with him?” Kaylee started going to the school nurse more often during that time, complaining of stomachaches.

The mother of three found out that if she tried things on a bigger scale, such as buying gifts to soothe the siblings, it came across as phony. Rather, it was the small, consistent measures that helped.

“I tried to make sure that I responded with the same type of concern as I did with Jaycee,” says McCain. She also took time to explain why she had to spend so much time at the hospital with her son. “This is something that I’ve done consistently. You can’t just sit down and have one big talk and then always expect them to remember.”

McCain calls the kids at home and talks with them separately when she and her husband are at the hospital. She tries to send cards to each of them when she has to spend long periods away from home. 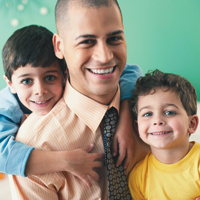 Include siblings. Experts say that one of the biggest mistakes parents make is that they attempt to shelter the other children by excluding them from hospital and clinic visits.

Danna Merritt, LMSW, at the Children’s Hospital of Michigan Hemostasis and Thrombosis Center in Detroit, says it is often good for siblings to accompany the family to the hospital or clinic. “This begins to erase some of the questions and concerns that siblings have,” Merritt says. “Kids have a tendency to use their imaginations, and sometimes what kids have in their imaginations is a lot worse than reality.”

Parents should involve siblings at home and during treatments, and give them opportunities to learn as much as possible about hemophilia, experts say. If parents are too stressed or burdened to reach out to siblings, they should delegate the responsibility to good friends or other family members until they are free to focus on the other siblings, Fung says.

Don’t overcompensate for the child with the bleeding disorder. Parents should treat their child with hemophilia as normally as possible, says Laureen A. Kelley, author of Raising a Child with Hemophilia (in its fourth edition and published by ZLB Behring, King of Prussia, Pennsylvania).

“We tried very hard to say, ‘Hey, this is who you are, deal with it. It’s no different than anything else.’ We’ve never wavered from that,” says Kelley, whose son Tommy has hemophilia. She also has two daughters: Tara, 16, and Mary, 12.

Ask for help. “Seek assistance from your social worker in your treatment center or from a counselor in the community who specializes in working with children with chronic illnesses,” Merritt says.

Reaching Out to the Siblings

Sue du Treil, PhD, LCSW, adjunct assistant professor of medicine and the hemophilia social worker at the Tulane University Health Sciences Center, New Orleans, Louisiana, could see that siblings were being left out of activities in the bleeding disorders community. So she organized a siblings’ retreat. Nine patients and 11 siblings (ages 10 to 16) attended the weekend, which du Treil says was packed with opportunities to learn and laugh. 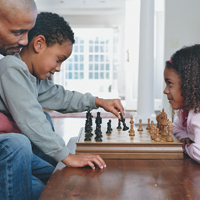 “The aim of the retreat was to focus on issues of the sibling relationship between the sibling and child with hemophilia,” du Treil says.

One patient wrote after the experience: “I like my sister now.”

“We felt that the patients learned a lot about their siblings during that weekend. I don’t think they realized how much their siblings cared about them in terms of their hemophilia,” du Treil says.

“I ask the parents if it’s OK if we speak to the siblings with them,” she says. “I ask the siblings if they have questions about hemophilia. I give them basic information about feelings they might have, and we talk about those feelings.”

Michael Rosenthal, who ran Camp Honor in Arizona (which does take siblings) for 13 years, says involving siblings in bleeding disorder programs is crucial because chronic illness affects the entire family.

Rosenthal remembers the story of two sisters who were tested to determine if they were carriers. One was a carrier and the other was not.

“The one who wasn’t a carrier was disappointed. She had grown up thinking that she was going to be a carrier, and when she found out that she wasn’t, it was as if she had lost something,” Rosenthal says. “The one who found out she was a carrier had grown up around children with hemophilia and anticipated that she’d have children with hemophilia. This is just a confirmation of who she was, and she felt good about it. I think that what this shows is that we don’t really understand fully the sibling experience.”

The camps that do invite siblings often have brothers and sisters attend the same activities and programs as their siblings with bleeding disorders. Even when it comes time to learn infusion practices, siblings can join in as support crew or just watch and learn.

Watching, learning and getting involved helped Jessica Casper, 22, grow up without the negative emotions associated with having a brother with hemophilia. Casper, who is not a carrier, has gone with her brother to Arizona’s Camp Honor for 12 years. She says learning to infuse her brother at a young age made caring for him “cool,” and not a “burden.”

“The message should be that we’re going to stick together in order to confront this together,” says Michigan social worker Merritt. “When that attitude comes across, it just seems like families and the children respond and are a whole lot better emotionally.” In fact, parents can use the bleeding disorder as an opportunity to teach all their children important life skills such as compassion and empathy.